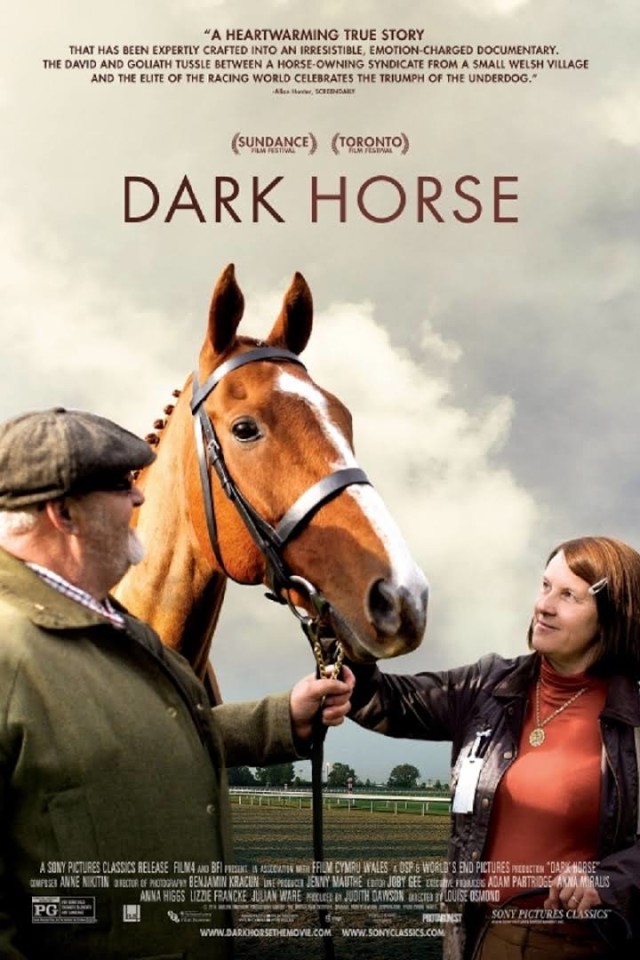 A documentary about a Welsh barmaid’s improbable dream of breeding an elite racehorse.

The film begins in a small mining town in Wales in 2000 with barmaid Jan Vokes. On screen, Jan is immediately likeable and down to earth, evoking that favorite aunt or neighbor that everyone loves. Besides working the weekends and most nights at the bar, she is also a janitor at the local supermarket.

During an on-screen interview she reminisces about her father breeding parakeets and marveling as a child at all the colors and variations he could produce. When asked about breeding racehorses she comments, “How hard can it be?”

After convincing 23 of her friends to form a syndicate — each pledging 10£ a week — she began looking for a broodmare. She found a middle-aged Chestnut named Rewbell in a back lot. The horse had never won a race and had a reputation for trying to kill jockeys. “She was just mental!” Jan comments to the camera. She purchased Rewbell for around 300£. They bred Rewbell to the stud Mien Mien for the bargain price of 3,000£.

A colt came into the world “all spindly legs” and with a “puppy” personality. He was born and raised on Jan’s slagheap allotment surrounded by other farm animals, behind a crooked fence on a bare patch of earth. The syndicate voted on his name — Dream Alliance.

When the time came, the syndicate voted to send Dream to the best trainer possible. Phillip Hobbs’ assistant tells interviewers, “It all seemed like a bit of a joke.” After several successful runs and two wins during his maiden season, Dream Alliance proved otherwise. Still, he was unpredictable.

“Welsh boys, you can’t always trust them,” Jan laughs. “You never knew which Dream was going to show up.”

But in 2008, in his biggest race to date, Dream Alliance severed his tendon. Jan tearfully remembers, “I told him (Dream Alliance) if anything happened or he couldn’t race no more or he didn’t want to race no more … he could come home.” But the veterinarian proposed an experimental new surgery, stem cell therapy.

The procedure would require a 16-month rehab and at least 20,000£. The syndicate voted unanimously for Dream to undergo the treatment.

One syndicate member told the camera, “Dream Alliance had won money and, in my mind, it was his money!”

Slowly but surely, Dream’s tendon healed. Kept under the supervision of Phillip Hobbs’ assistant, who described the horse as a “street fighter,” he began racing again in 2009 where he placed 2nd in his first race and then won the Welsh Grand National with 40-1 odds.

With nowhere else to go but up, the syndicate entered Dream in the 2010 Grand National. Will he win? You’ll just have to watch and see!

Dark Horse is a heartwarming, inspiring story about a working class horse taking on the best in the sport. As one interviewee said, “He was the village’s horse … it brought us back alive.” In that way, this movie isn’t entirely about horse racing. It’s more about a small town community and blue-collar workers finding a flag bearer for hope. “Dream took us to places you couldn’t even imagine,” syndicate member Davies said. “It’s elating when you can do something, particularly when no one gives you a chance.”

The cinematography and sound quality are excellent, though I did have to use subtitles to understand one or two of the interviewee’s thick accents. It has won multiple awards at film festivals and has a 96% approval rating at Rotten Tomatoes.

I give Dark Horse 3 1/2 Golden Horseshoes.

Dark Horse is available on DVD and Sony Digital as of August 23rd.