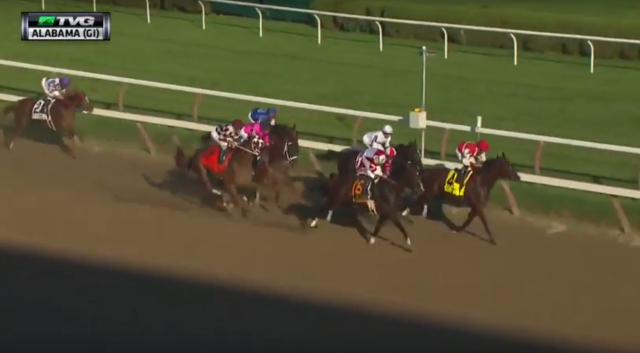 Anybody else getting deja vu?

Regular readers might remember our feature just a little under a month ago, taking a look at two beloved American favorites conquering their respective fields at opposite sides of the country: California Chrome, the chestnut with the cult following, and Songbird, an undefeated brilliant filly. If you’re feeling like history might just repeat itself after this weekend, you’re not alone: these two were at it again, dividing and conquering.

Songbird in the Alabama Stakes (Saratoga)

Up at the Spa, the iconic seat of the East Coast old guard of summertime racing, the undefeated Songbird headed to the gate for the Grade I Alabama, looking to extend her lifetime perfect record to a tenth win.

Out of the gate, Songbird and Go Maggie Go matched up to set the pace, leading the field at a good clip all the way through the first turn and the backstretch … but with just the lightest urging from jockey Mike Smith, Songbird eased away, first gradually, then in a torrent. The rest of the field flung itself towards her lead, but there would be no catching her today. Songbird’s record is now “a perfect ten.”

On the opposite coast, the Grade I Pacific Classic was shaping up to be one of the most hotly-contested races of the summer season: California Chrome, arguably in the best form of his life, was facing Dortmund, who had challenged Chrome in a drive-for-the-wire duel to the finish in the San Diego in July, and both boys were up against the formidable and fan-favorite Beholder, the reigning champion of the Pacific Classic.

As the TVG commentator states at the start, this sport loves rivalries, and this was one heck of a showdown — but no one could catch Chrome, who hustled right out of the unfavorable number-one gate position, nabbed the lead and never looked back. Victor Espinoza piloted the California Chrome to a commanding win and never even had to raise his whip.

Sure, there’s plenty of season left before the Breeders’ Cup Classic, but with Chrome running like this, it’s hard to believe that anyone in the country can catch him. Beholder and Dortmund certainly put up a valiant fight, but were no match on this day.