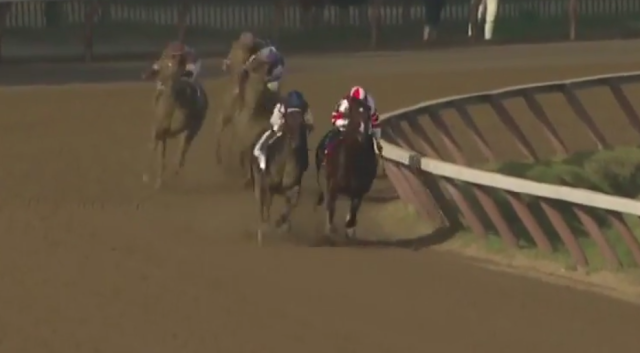 Two much-loved champions took to the tracks this past weekend in a pair of exciting races that culminated in breathtaking nail-biter speed duels: watch California Chrome and Songbird respectively conquer their rivals!

Despite a Triple Crown without a “hero” to root for to win all three legs, 2016 is shaping up to be one of the most exciting years in horse racing in recent times: two beloved champions each won their respective race this past weekend in dramatic style, closely battling challengers in thrilling duels that had each crowd cheering. Watch five-year-old California Chrome and undefeated three-year-old filly Songbird.

In his first start since winning the Dubai World Cup, California Chrome faced four rivals in the Grade II San Diego Handicap, the most formidable of which was the 17-hand monster of a four-year-old Dortmund. Dortmund had been fairly quiet on the racing front with his last start in the fall of 2015 after a Triple Crown run earlier in the year.

Dortmund, under Gary Stevens, went right to the lead with Chrome shadowing him all the way around; in the final turn, Victor Espinoza turned Chrome loose and sent the horse to the front. The two chestnuts hooked up in a no-holds-barred sprint for the finish: Chrome had his head in front, then Dortmund gamely battled on, then Chrome fought back to edge out the massive colt.

Chrome’s next start is tentatively scheduled to be the Grade I Pacific Classic, where he is likely to face not only a game Dortmund again, but also the defending champion, the mare Beholder.

One day later and thousands of miles across the country, the undefeated filly Songbird loaded into the starting gate for the Grade I Coaching Club American Oaks at the Spa and promptly rocketed right to the lead under Mike Smith. As the field rounded the far turn, Carina Mia under Julien Leparoux pounced, slowly reeling in the distance until she and Songbird were head-to-head as the crowd came to life.

But into the stretch, Songbird battled back, every inch a champion, taking back in just a few strides a healthy lead which she continued to open all the way to the wire. Her record now stands at nine wins in nine starts.

We look forward to watching both of these champions as their summer and autumn seasons develop!