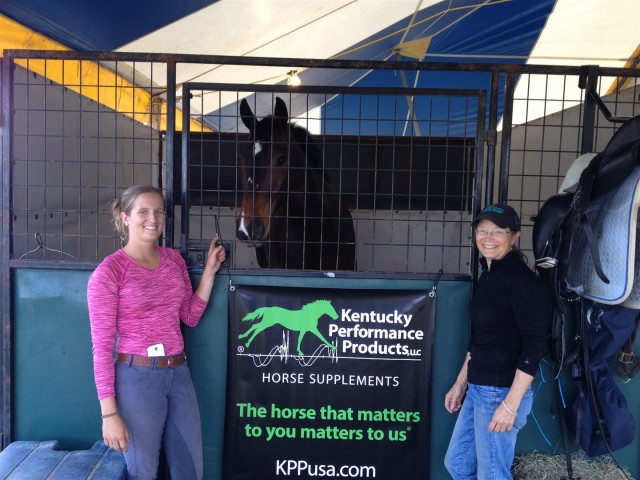 “The Natural E,” also known as Leo, is Kentucky Performance Products’ foray into event horse ownership — and he has officially made the step to Training level!

Elevate Event Team’s The Natural E (aka Leo) is now officially a Training level horse. In March, Megan competed him in two more horse trials in Florida: Three Lakes, where he finished first, and Rocking Horse Winter II, where he placed second. His fitness and confidence levels were growing. His lengthening was coming along and he was learning how to wait and jump softly over his courses.

The biggest challenge Megan faced with Leo was keeping his mind on the job at hand when he was running cross-country. He always seemed to be more interested in the fence judge or the spectators than that little jump we were asking him to pop over! The quicker pace and more complicated questions at Training level helped, but he still enjoyed some sightseeing now and again. But once he got his head in the game, he was taking Megan to the fences with tons of confidence.

It was March and spring was quickly approaching. It would soon be time to leave Florida and head back to Kentucky. We decided to make one stop along the way at the Carolina International CIC and Horse Trials. Two of Megan’s students, Mimi Richards with Whitfield and Tiffany Smith with Indy, were also competing that weekend.

The Carolina International is held at the lovely Carolina Horse Park in Southern Pines, North Carolina. It is a nationally recognized, premier competition site. The cross-country course is loaded with lots of tough questions as it meanders in and out of the woods. There were plenty of long steep hills, quite the change from the flat sand courses of Florida. It was a big and challenging course and the competition was the toughest we had met yet, since many of the nation’s best riders were there to compete in the CIC divisions.

The team arrived on Thursday and settled the horses in. Did I mention that Leo had gotten really fit in Florida? Did I also mention that he was used to being turned out all night? You can guess where I am going with this. After a few days cooped up in his stall he had a lot of pent-up energy. The show grounds were big and bustling, and hand-walking him in the morning became quite the adventure. At more than one point all 17.3 hands of fit Danish warmblood were off the ground and squealing with delight. I was glad I decided to put the chain shank on him. I headed back to the barn after a particularly extended period of exuberance and told Megan she just needed to get on the big boy and take the edge off. I am not sure she quite believed me when I told her about his airs above the ground. When she got on him, he dropped his head and walked on a long rein all the way to the schooling area. I walked behind, shaking my head as Megan just smiled at me. Really, Leo? Way to make a liar out of me.

I spent the weekend taking care of horses, helping my teammates get ready to compete, and cheering them on as they faced the challenges each day brought. I had a fantastic time socializing with friends once the sun went down. I walked courses and saw upper level horses sail over huge fences. I watched with pride as Megan and Leo put in an amazing dressage test, earning a 20.9.

I bit my nails as they negotiated a tough stadium course, Megan riding strong to the very scary “rock” fence. I held my breath as they leaped out of the start box and galloped off full of confidence toward their first cross-country fence. Leo negotiated his first drop into the water like a pro and gave his best effort over the other tough question on the hilly course. He and Megan finished with a double clear round and I could breathe again.

Leo placed third out of 32 entries in the open Training B division. He finished on his dressage score of 20.9, which will give you some idea of how tough the competition was. Megan’s students both placed in the ribbons. Mimi finished 8th (out of 39 entries) on her dressage score in Training Rider. Tiffany had a few stadium jumping faults but a clear cross-country ride to finished 8th in the Prelim/Training division. There were smiles and hugs all around.

As the show came to a close we packed up and headed out, and it was time to make our way over the mountains and back to Kentucky. The summer season was poised to begin.

The Horse That Matters to You Matters to Us®. Click here to sign up for KPP’s Nutritional Minute.