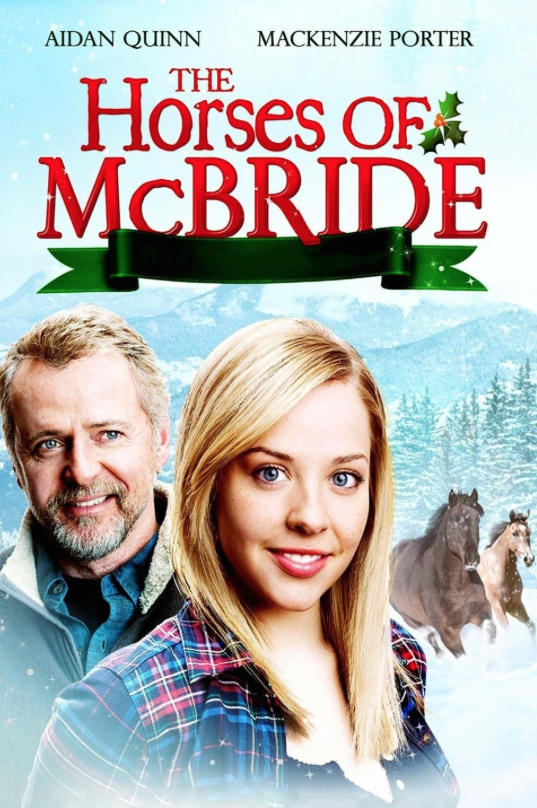 This week we check out a Christmas flick, because it’s never too early for Christmas.

Headlined by Aidan Quinn (Elementary, Legends of the Fall) and Kari Matchett (Leverage, Covert Affairs), this film is a made-for-TV Canadian movie based on real life events that occurred in 2008.

The film opens with a small town and family farm in financial trouble and two horses trapped in the snow. After her brother spots them from a snowmobile, our protagonist and resident horse girl, Nicki, begins to hatch a rescue plan. First, she sees to their immediate needs like water, hay and hoof cleaning. Then, she figures all she needs is a rescue helicopter and $10,000 to $15,000.

A savvy young reporter starts going around the town asking for comments on the horses and their condition. This character is the reason I was drawn to this movie in the first place. The actor playing Simon is named Greyston Holt and, though he’s just a pup in this movie, he eventually grows up to star in the series, Bitten. He plays a werewolf in that show and is a total hunk both on and off screen.

Feels good to be writing some music with this guy. It’s been too long. #jamming #Vancouver #ineedtopracticemore @thejerkstore3000

But back to the movie…

As both storylines progress, volunteers begin flooding the McBride area to help the horses. Freezing temperatures and strong winds hampered the rescue both off and on screen. Actress Mackenzie Porter told Canada’s Metro News, “I can’t imagine it. Just the little amount of work we were doing to portray this story on film was exhausting. And I experienced nothing compared to what the Jeck family actually experienced.”

When the on-screen veterinarian determines the horses are too weak for a helicopter rescue, Nikki starts digging. They only need to dig a ten-foot deep trench though hard pack snow for just under two miles to reach the nearest logging road.

When they’re not shoveling snow, Nikki and Simon team up to discover the events that led to the horses being trapped in the first place. No one comes forward to claim the horses that were abandoned with full pack gear, but several eye witnesses call in to report where and when they first spotted the horses.

Meanwhile, her dad receives an offer on the farm that is too good to refuse. Nikki doesn’t react well. After they argue, Nikki refuses to go home and instead camps with the horses. She almost shoots her dad that night, but not for the reason you think. Really Canadian wildlife is just formidable…

Seriously, though, wolves start harassing the horses so volunteers are forced to camp in -30 degree temperatures every night to protect them.

Will the horses be rescued? Will the family farm be saved? Will Simon ever take off his shirt? You’ll just have to watch and see!

This movie was surprisingly well written and acted. Yes, it’s a TV movie, but it was still very entertaining and the fact that the story is based on true events certainly amps up the drama. I could have done without the added melodrama of the vegetarian hipster characters antagonizing the local famers about eating meat, but I think the filmmakers were just trying to get the point across that the team of rescuers were diverse and from all walks of life. The whole film had a very Heartland vibe to it, so fans of that classic Canadian TV staple are sure to enjoy it.

I give The Horses of McBride, available on Feeln and Hulu, 3 Golden Horseshoes.