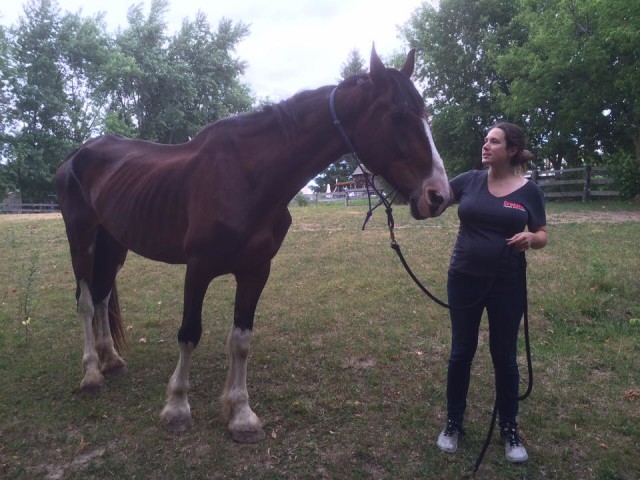 When Encore, whose original rescue was featured in the documentary “Free Rein,” found what looked like the perfect adoptive home, no one anticipated he would need rescuing again.

When Horse #1373 walked out of the Ontario auction in June of 2014, his new connections believed it would be the last time he would experience neglect, hunger, illness or fear. The seven-year-old Clydesdale cross became known as Prospero’s Encore, and his rehabilitation became the subject of a documentary in the series Free Rein.

Encore’s transition from auction horse to a flourishing personality was not without setbacks. “Only days after arriving, it was obvious that Encore was unwell,” his rescuers Jessica Fobert and Zoë Carter told HN. “We spent weeks working to save him with veterinary care, and nutritional support. Encore had been diagnosed with a respiratory infection, E. coli and a dormant virus that had sprung up. He was underweight when we brought him home, and continued to lose even more weight during the worst of his sickness. Encore gained approximately 250 pounds during his stay with us.”

After a long road of recuperation, Encore was at last on his way, and Fobert and Carter began to search for exactly the right adopter to finally give the horse his permanent forever home — the goal of their project all along. “We interviewed many applicants and did home visits to check the facilities of potential adopters. Encore had been malnourished for an unknown period before we found him and his recovery was successful but he still needed close attention.”

A seemingly perfect situation arose: Fobert met applicant Sandra Reed of Whisper Ridge Ranch in February of 2015. “Reed agreed with us that it was important that Encore continue to be cared for as a ‘hard keeper’ while managing his supplements, dietary needs, hoof and health care. Her farm was clean, with approximately 13 horses that she claimed to use for her equine assisted therapeutic work with people. We did not know that she had only been there for a few months prior to Encore’s arrival.”

Encore in February of 2015. Photo by Jessica Fobert.

Encore was trailered to Whisper Ridge Ranch in March of 2015; Reed signed an adoption contract and Fobert and Carter left the gelding at Whisper Ridge with promises of love and a safe forever home, as well as some supplements to get Reed started. All was well — at least at a glance.

As months went by, Fobert and Carter realized that things may not have been as perfect as they had seemed. Emails from Reed with updates about Encore noticeably lacked the photos that the women had requested, and by July Fobert and Carter decided to visit Whisper Ridge in person, attending a ranch open house both to support Reed as an adopter and to see Encore for themselves.

“The visit was devastating,” Fobert stated. “Encore had lost close to 200 pounds; his ribs and hips were showing and his hooves had not been addressed since what appeared to be the day we dropped him off. Serious words were spoken as we shared our concern about what we had seen. Sandra assured us that Encore would regain the weight he had lost, and that she would pay closer attention to his needs.”

Encore at the time of adoption by Reed. Photo by Jessica Fobert.

Fobert and Carter continued to visit the farm as well as call and email Reed; by September it was clear that Encore’s condition was not improving and the women began the long process of attempting to reclaim the horse. “Some of the growing number of  horses on the farm were starting to look similar. It also became apparent that we had mistaken this farm to be a sanctuary when we began to connect the dots with every person who came forward with claims about her poor animal husbandry practices. It turned out that she misrepresented herself to us as a graduate of the FEEL (Facilitated Equine Enhanced Learning) program when in fact she had never completed the training.”

Encore in July of 2016 just after leaving Reed’s farm. Photo by Andre Leclipteux.

Unfortunately, despite a written contract, taking Encore back proved to be more complicated than anticipated: Fobert and Carter tried everything from asking the horse to be returned, offering to purchase him, offering to send more supplements and plain stating that they would simply take the horse back, in accordance with the contract. “Phone calls to local police informed us that ‘possession is nine tenths of the law’ and taking him without Sandra’s permission could lead to more trouble.”

After months of reporting Encore’s condition to the SPCA, as well as the deteriorating condition of other horses on the farm, with no apparent headway made, Fobert and Carter tried a new tactic: as Encore was considered livestock, and livestock was considered property, they built a legal case to file a claim against Reed for ownership of the animal. This process too proved to be worryingly slow: the suit could not be served until April of 2016, and still legally had to allow Reed time to defend herself.

Mercifully, the August court date was moved up to July by pure chance, and Fobert and Carter’s case was strong: a judge ruled that Encore rightfully belonged to the women and was theirs to reclaim. A year after the discovery of his worsening condition, Encore was finally on his way back.

“He will remain close to us for the rest of his days,” Fobert promised. “Encore is in good spirits with surprisingly bright eyes and his gentle old soul continues to spread smiles. He has gained over 10 pounds within his first week away from Whisper Ridge on simply hay and supplements.”

Encore at time of second rescue in July of 2016. Photo by Andre Leclipteux.

Encore at time of second rescue in July of 2016. Photo by Andre Leclipteux.

“Her strategic approach to horse abuse”

While Encore is at last safe after his second rescue, other horses remain on Whisper Ridge Ranch in similar condition — three actually starved to death over the winter. Fobert and Carter continue to fight to save them. “Our animal welfare system and laws need to be strengthened and rewritten. Encore is just one example of how many animals are suffering without action being taken,” Fobert stated.

So how did these horses wind up in such states? How did Reed hide a history of horse abuse, with witnesses only coming forward when they realized it was happening again?

“Supposedly, no other formal investigation has been done on her before now,” Fobert replied. “Unfortunately I did not know anything about it until I started doing more research. She has been reported to the OSPCA several times while living at several farms, but no charges were ever filed. She moves when she needs to start over again.

“The laws need to change so that people can be made aware of abuse like this, to prevent Sandra from continuing her strategic approach to horse abuse.”

Fobert hopes Encore’s story can help teach other rescuers and horse rescues. Her advice for others seeking to adopt out rescued horses is as follows: