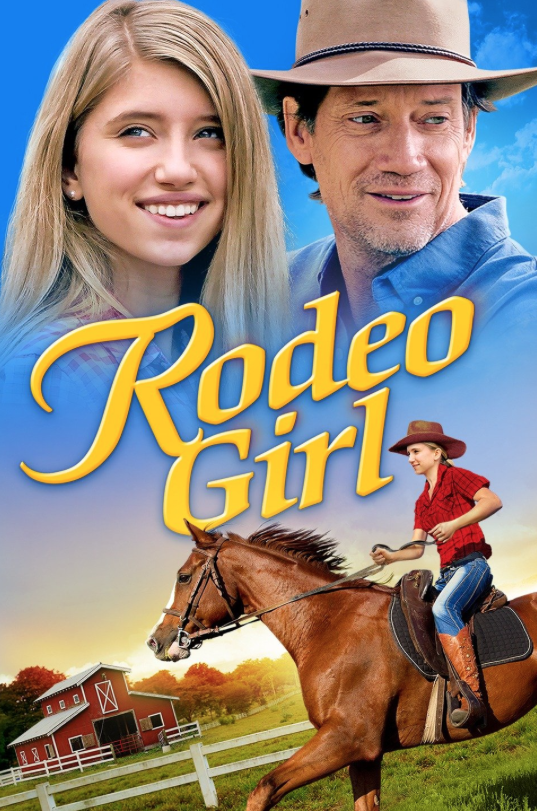 In this week’s flick, a hunter/jumper gets her cowgirl on and Amanda approves.

The film starts with Priscilla having a panic attack at a hunter/jumper show. She’s training for the “World Hunter Jumper Finals in England” #notathing. Next, we see her having lunch with her mother and new stepfather. Unfortunately for Priscilla, the happy new couple has decided to go on a four month cruise without her. Priscilla is getting shipped to her dad — who she’s never met — in Michigan. Thanks, Mom.

She at least gets to take her horse, Lucky Lass. While there, Priscilla attends her first rodeo and falls in love with barrel racing. She plans to start training immediately with the help of the cute stable hand named Sage. Note to parents: If you own a horse farm and you have a teenage daughter, it’s probably a bad idea to stick a cute boy in a trailer by the barn.

Sage is reluctant to work with them at first, but Priscilla convinces him by demonstrating Lass’s pure speed. Spoiler Alert: This is one of the top three slowest canters I’ve seen in my life.

One musical, magical montage later and our team is well on their way to barrel racing glory. Priscilla and Lass enter their first rodeo — Lass with a meticulously braided mane and Priscilla with ‘Murica on her side. She lies to her father and Sage doesn’t think they’re ready, but let’s not get caught up in the minutiae of the plan.

They end up with a respectable third place finish, but the muck hits the stall fan when everyone gets home late. Dad is furious. Priscilla is furious. Sage — who didn’t know they were lying to Dad/his employer — is all…

Priscilla and Dad reconnect when she discovers a trunk full of old letters. It turns out he wasn’t a dead beat dad; he was warned away by Priscilla’s grandfather in a plot destined to be a Nicholas Sparks’ novel in 2017. Their bond is strengthened even further when Priscilla and Lass are tormented by the local Mean Kids and Dad goes on the defensive. Then they ride horses together, garden together, fish together… It’s basically a big giant father/daughter love fest.

They keep entering rodeos and Priscilla and Lass are kicking butts and taking names. They’re doing so good that the possibility of them qualifying for the “National Youth Rodeo” is a real possibility. Then, two bad things happen. One, the Mean Kids reveal their true motivations — their matriarch wants Sage. Second, a tornado tears through the area at the same time the Mean Kids decide to sabotage Lass — feeding her a 5-gallon bucket of oats. Lass colics and the team goes into survival mode.

Will Lass survive? Will they qualify for the NYR? Will Mom of the Year ever return from her cruise? You’ll just have to watch and see!

This movie, honestly, surprised me. I figured this review would be of the “I watched it so you don’t have to” variety, but it was actually entertaining. Some of the dialogue and acting was bad, I mean really bad, but all in all the young actress and actor playing Priscilla and Sage pulled it off. There were even a few lines that made me laugh out loud. The horse training sequences were mostly believable, despite the fact that the Quarter Horse playing Lass was clearly made for Western Pleasure speeds and not Barrel Racing.

The film quality was great and the soundtrack at least wasn’t distracting, even if it did sound a little like bad elevator music.

I give Rodeo Girl, available on Netflix, 3 Golden Horseshoes.