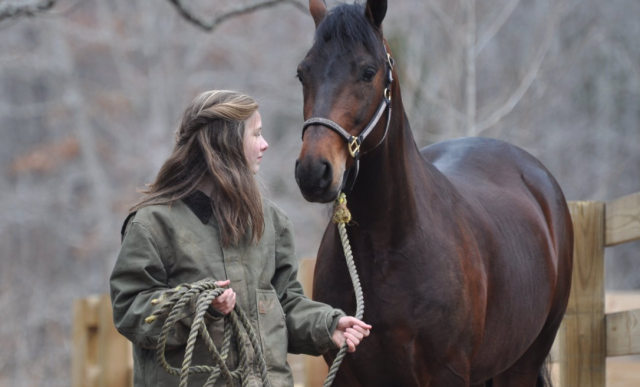 Amanda watched this one so you don’t have to.

A Fine Step (2014) is described as, “When an expert horseman (Luke Perry) suffers a traumatic accident with his top horse, he overcomes his injury with the help of a young girl who helps rehabilitate him and the horse.”

Check out the trailer:

So this is the part where I usually break down the first half of the movie by summarizing a few major plot points before introducing you to the film’s critical question. But let’s cut the muck, shall we? There’s a down on his luck trainer, a perky young equestrian and a horse with a soulful connection to both. It’s melodrama frosted with grief and served with love sprinkles. Like the best “packer” on the circuit, we’ve seen this course before.

Here’s the problem with this movie, though.

My apathy stems from exceptionally poor writing. Horse movies are usually made by horse people who have no clue how to make a movie or movie people who have no clue about horses. I can’t say if A Fine Step suffers from one the other or both, but it’s awful. This screenplay was written by two producers, Keith Suggs and Dennis Sonnenschein. Suggs’ IMDb profile is almost entirely blank, but Sonnenschein has at least one other film…

Oh good, so he writes about a wide range of topics.

With that stellar background in movie making it should come as no surprise that this film’s plot development is a hot mess. We have no less than half a dozen “major” characters, but no major storylines. The down on his luck trainer walks around with a limp and — supposedly — has enough backstory to warrant a nod in the IMDb movie summary, but his “traumatic accident” is never shown. There’s another trainer who is also down on her luck. Now, she did have an accident that was shown in a dramatic slow motion montage. Then there’s a dad character that has nefarious business dealings with the female trainer’s dad, but also hired the male trainer in his barn. The horse is from the female trainer’s dad’s barn, but he’s owned by the new dad, but was actually bought by the male trainer and he’s being trained by the female trainer…

Yep, that’s what we’re dealing with here. Then there’s the inspiring little girl that brings them all together. Except the actress playing “Claire” is a grown woman that has been stuffed into pigtails and forced to speak in a grating, mousy voice. The whole thing is very strange. One second the filmmakers have her coloring horse pictures — with crayons — on her pink striped bed with a dinosaur by her unicorn lamp and the next they have her throwing a tantrum because the farm hand — ’bout 30-years-old — brings his girlfriend to dinner.

Why is Armand Assante in this movie? Did he lose a bet? Luke Perry, stop ruining the good memory of Beverly Hills, 90210.

This movie does focus on Paso Fino horses and I can’t name any other movies that feature the breed. The final competition at the end of the film was at least mildly interesting. Justin Baldwin, of Jane the Virgin fame, is also hilarious in his very small part of the film.

I give A Fine Step, available on Netflix, 1/2 a Golden Horseshoe.