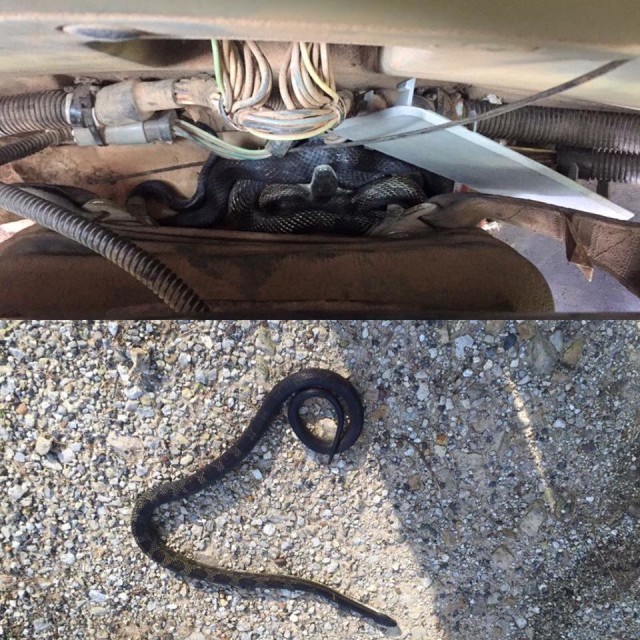 July 25, 2016Kristen KovatchJeremiah Kemp#ESSAY, Day in the LifeLeave a comment

Jeremiah Kemp of Eagle Ridge Equine is back with another candid tale.

A black snake that wedged itself into equipment in a previous incident. Photos by Jeremiah Kemp.

Jeremiah Kemp of Eagle Ridge Equine and Farrier Service has regaled us with tales from the life of farrier and farm owner in the past — such as Horse Kicks 101 and A Day In the Life of a Farrier. We’re pleased to introduce a new column, in which Jeremiah details the kind of daily occurrences that we all face as horse owners — and shows how to find the funnier side.

I sat down in the cab of my CAT skid steer as I had done hundreds of times before. I fastened my seat belt, lowered the operator armrests, secured the cab door and deactivated the auto lock, all part of a pre-start up checklist I fly through nearly on autopilot these days. I started the machine and began rumbling out the barn doors and down the driveway on a mission to bring a new round bale out to all the hungry horses, but this would not be my day…

Unbeknownst to me, hiding in the roof of the skid loader was a three-foot-long black snake. What wormhole opened up to magically transport him in there is completely beyond my understanding, but there he was. In blissful ignorance, I rattled down the road looking on with anticipation as I jammed out to one of Taylor Swift’s latest hits. Agitated with the fact that his house suddenly began to move (or perhaps he did not appreciate my eclectic musical preferences) the snake dropped down out of the ceiling and right down the back of my shirt.

Now, I don’t really have a fear of snakes — in fact, I feel like they’re pretty cool — but when something large starts slithering down the back of your neck (taking the scenic route to your nether regions) you tend to freak out a little. Or a lot…

Sadly, however, when you want to flip your s— in the tiny cab of a skid steer, you aren’t going to get very far, and your new reptilian friend is not going to be particularly impressed with your interpretive dance moves. The loader bucket in the way of the door opening. The controls were in auto-lock due to having removed myself from the seat to perform a spirited rendition of the Western classic “there’s a #!$ing snake in my pants,” and the only way to disengage it was to sit back down in the seat and strap back in (not a particularly appealing option with the snake now almost completely in my pants and making his way between my legs).

I was hopelessly trapped in a level of hell Dante forgot to write about. Calmly panicking as I weighed my options, I noticed the impossibly small emergency escape hatch. Lacking the ability to kill the snake, teleport, or set myself on fire, it seemed to be the only clear choice.

Never before had I taken such great care when unfastening my belt and the top button of my pants and ever so gingerly slide the zipper south. With the snake and I occupying the same underwear, it was my hope that as I exited the skid steer I could kick off my pants and liberate myself. I pulled the red breakaway handle and carefully shoved the glass outward as I began to inch my way on top of the seat, out the window, and out of my snake-infested pants.

As if suspended by some sort of invisible cable I managed to levitate ever so gently out of the cab and over the engine compartment before making what felt like a ten foot leap into the air and hitting the ground running. I managed to kick off both shoes, part ways with my pants, and fish the snake out of my underwear all while moving like lightning across the gravel driveway.

As I flung the agitated Nope Rope into the grass, the befuddled and somewhat exasperated faces of my equine companions spoke volumes of the silent judgments they were casting on their half-nude pet monkey streaking past their gate. Unflinchingly they stared on as I continued to make my escape down the driveway shouting a newly-invented language. Their rhythmic chewing pausing for only a moment wherein I could almost read their thought bubbles:

“Oh, the poor thing has forgotten how pants work again… “

“Sigh, is the third time this week… we are surely going to hear about this from the neighbors… “

“And this right here is why the house across the street never seems to sell.”

The cold uncaring gaze from the minis was perhaps the deepest wound to my pride. “Retreating from the thy foe? ‘Tis only a pasture noodle… coward!”

It was not a proud day in the house of Kemp.