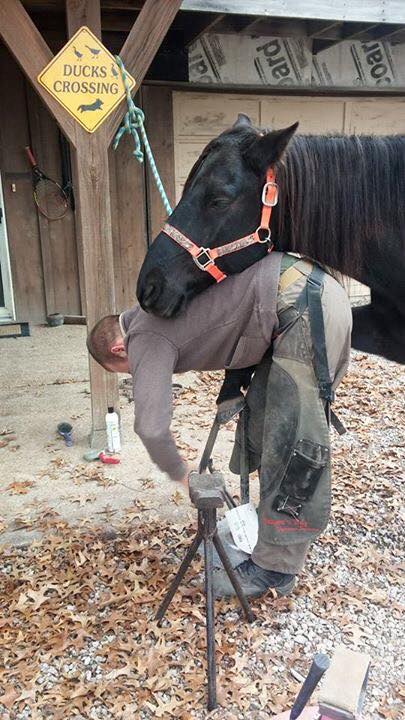 Jeremiah Kemp of Eagle Ridge Farrier Service walks us though a typical day’s work at the anvil.

Spoiler: there’s a lot of poop.

Have you ever wondered what it’s like to be a farrier? Or maybe just how many times your farrier was pooped on that morning before shaking your hand? Maybe you have thought to yourself “what’s that smell?” or “what is that green thing stuck to his ear?” or even “The dogs sure love them, I wonder what hoof trimmings taste like?” If 12 years of standing at the anvil have taught me anything it’s that the answer to such mysteries (at least the ones that can be answered in a few words) are: a lot; poop; also poop; and salted poop…

As for what it’s like to be a farrier, let me try to explain. This job is not for the faint of heart or the mentally stable. You can’t be sane (or hope to stay that way long) if you wish to work with equestrians. You have to be insane to participate or work in a full-contact sport that lays under the line where rugby meets motor-cross and your only bit of protection is a hat made of the same material as a disposable coffee cup. Seriously, aside from crash test dummy, what other sport or job exists where someone can suffer massive blunt force trauma and is expected to get right back up and repeat whatever activity just about killed them a moment ago? “Horse or hospital!” is an expression I have heard more than once both as a horse rider and as a farrier (moving target) apprentice.

The ability to withstand impact aside, this is a job that requires the same attention to detail as an artist, the skill and steady hand of a surgeon, the patience of a saint, and the endurance/pain tolerance of a Navy Seal. For those who have never seen a farrier practice their trade and wants to walk in their shoes, try to imagine you are working in a stiflingly hot building, bent over and holding a 2×4 between your knees. On one end of the 2×4 is a small platform you are attempting to perform incredibly detailed work on. This table is incredibly valuable and the slightest mistake could cause it to explode; most of the tools you are given to work with are crude, bulky, and (like the table) also incredibly expensive considering they were invented sometime in the 14th century. While you are standing in this pizza oven from hell you will have to light a fire, which you will use to heat up your art work. Sometimes this art work will set you on fire.

Meanwhile the Hulk is tugging on the other end of that 2×4, occasionally ripping it away from you and dragging small knife blades that are sticking out of this table through your hands and legs. Side note: Friction tape will become your new best friend as it makes holding on to the rusty and poo crusted tools (which are now covered in your own blood) much easier! From time to time the Hulk might let you have the 2×4, but he is going to sit on you while you toil away on your art project. Now, as you fuss over details and panic every few moments that the speck of blood you just saw might not be yours (and are incredibly relieved when it is,) imagine there is a bucket of excrement sitting above your head, which at any moment may tip over on you without warning. Depending on the time of year, that bucket of poo may be switched for a bucket of spit. (Ah, clover…) And I mean more spit than you might think any earthly critter would have the capacity to produce. You will also sweat so much you will drink two gallons of water by the end of the day and not need to pee once. For this reason you will never leave the house with no less than nine extra shirts and just as many towels.

To make your task even more impossible imagine that there is this invisible crazy man wildly running around your work area swinging Gallagher’s hammer. At any moment he might run up and smash you like one of Gallagher’s ill-fated watermelons. If you are unlucky enough to find yourself on his pedestal of doom that day, you are going to be faced with one of those moments when where most rational people might question your sanity. Since you can’t give up and call it a day with only three of the four 2x4s now complete (there is this very terrifying 5’4” 120lbs women who just body slammed a 1,300 pound Hanoverian into submission who would be very displeased if you did) you must trudge on despite the pain of what you are pretty sure is a broken leg and maybe a few pulverized ribs. It takes a special kind of stupid to keep working after the might of Thor’s hammer (a draft horse) knocks you through a barn wall. Fortunately you’re a farrier and you are just the kind of stupid needed to get back up and finish the job!