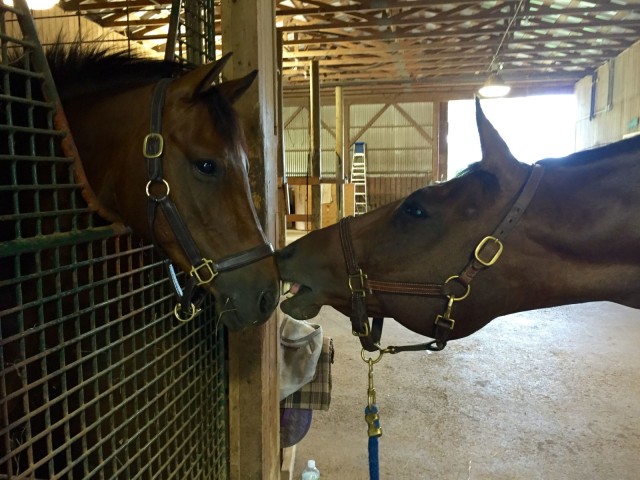 Leslie Wylie and her new pony Princess faced a shared demon this past weekend: read Leslie’s pre-event reflections on what the weekend’s competition means both for her and her new mount.

Sorry Princess, Esprit is not a good kisser. (Princess’ squealing response three seconds later: “GET AWAY FROM ME, YOU PERV!”) Photo by Leslie Wylie.

“Some people who are going through a midlife crisis splurge on a sportscar, take up skydiving or have an affair with the mailman. Since I am a 10-year-old horse crazy girl trapped in a 34-year-old body, I bought myself a pony.” In Act 3, Leslie and her new event pony Princess gear up for their first event together, which coincidentally requires facing a shared demon. If you missed them: Act I, Act 2.

The last time I galloped out of a startbox was May 2014 at the Kentucky Horse Park.

We didn’t make it through the finish flags.

Esprit had been telling me all spring that he’d had enough of the big jumps, and I hadn’t been listening. Didn’t our four-year partnership, checkered by top finishes, deserve a happy ending? I wanted us to go out with a ribbon, not an E. We’ll give it one more event, I kept telling myself. But mapping human pride onto a horse never ends well, and walking off the course on that bright spring day with tears streaming down my face I knew that we were done.

Esprit jumping his heart out at May-Daze at the Park, his final event. Photo courtesy of Xpress Foto (www.xpressfotot.com).

Opening the door of my trailer tack room two years later, in preparation to go pick up my new pony Princess, was like unsealing a mausoleum vault. Everything was just as I’d left it when I hastily packed up to leave May-Daze: bridle tag tossed on the floor, cross country boots crusted with salt, dressage saddle fuzzy with mold. With no horse to event, I just hadn’t had any incentive to clean it out.

Clearly did not hang this one on the fridge. Photo by Leslie Wylie.

I’d tried to put Esprit back in work a couple times since then, hoping for a low-level swan-song season, but both times it ended with a heartbreaking no-go. These days he’s living the good life in a big green field with his buddies, happily retired and forever shrouded in my love and gratitude.

He’s adjusted to our change in course a lot better than I have, honestly. Since Esprit retired there’s been a hole in my spirit that I’ve tried to fill with many things to no avail. Since I began eventing in the early ’90s, this is the longest I’ve ever gone without competing. The sport is in my bones and when I’m not doing it regularly I feel adrift, like a boat missing both its sails and its anchor. It’s only on the back of a horse that I feel like I truly know who I am, with a sense of where I’ve been and where I’m going.

When I finally bit the bullet and made the completely irrational decision to add a third, not-retired pony to my board bill, something began stirring inside me again. I feel a little bit brighter, a little more myself than I have in a long time. I spend all my spare time and emotional energy on Princess: puzzling her together, arranging and rearranging the chess pieces of our new partnership, and losing track of time at the barn.

“I’m having an affair with my pony,” I confessed to my husband Tommy one night when I’d gotten home after 9 p.m., again.

Because he is the best, most supportive husband in the world, he kissed my head and said something like, “Sounds good, babe!” And I know he means it, because seeing me happy again makes him happy.

“I am pony, hear me roar!” From L to R, our little family: Esprit, Mishka, Princess. Photo by Leslie Wylie.

Princess, a fierce competitor in her own right, has some unfinished business hanging over her head as well. Her last event, coincidentally, was also in 2014 at the Kentucky Horse Park. And she, just like me, didn’t make it around the cross country course.

I don’t know what happened with her that weekend, and I don’t want to know. When I bought her I made a point of not asking. Water under the bridge. A fresh start for us both.

Princess and I have come a long way in just a matter of weeks, and when the closing date of Champagne Run rolled around I knew what to do. We could hang around the farm for the rest of the summer, picking away at details in the ring, or we could drive up to Lexington and face our demons — at a very reasonable Novice level. (In yet another parallel between Princess’ competition record and mine, neither of us have competed at Novice since 2010).

After two decades in this sport, I know better than to put any stock in pretty narratives. The paths we navigate with our equines unfold in baffling ways. There are ups, downs, twists, turns, double-backs, and dead ends. You get what you get, which isn’t always what you want, need or think you deserve.

I have no designs on a ribbon this weekend, but I think it would do us both some good to find some finish flags. Ready or not, Kentucky, here we come.