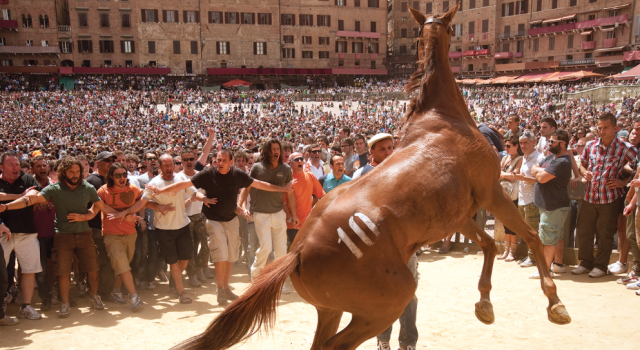 This week we watch a documentary film about the centuries-old horse race held in Siena, Italy.

It seems like a simple concept, a horse event rich with cultural traditions and history, but it’s not. Bribery, doping and animal abuse are the top controversies surrounding the race. That’s where the documentary, Palio (2015), picks up. Billed as the “Rocky on Horseback” by the New York Times, it felt a little more like “Equine Hunger Games” to me.

IMDb states, “PALIO is the thrilling story of a young ‘outsider’ keen to break in to the dangerous but lucrative race and the corrupt ‘insider’ who has manipulated the city of Siena for a decade. Their passionate and dramatic battle is an epic and cinematic tale of Italian life in microcosm.”

The film starts when we meet veteran Gigi Bruschelli, winner of 13 Palio in the last 16 years, and his strongest rival, young Giovanni Atzeni. Atzeni got his start in Bruschelli’s stable, but has since broken off to make his own name.

The filmmakers did a poor job of convincing me Bruschelli actually was as corrupt as he was billed in the film’s description. In person interviews implied he was a savvy horse person and used strategy as his number one weapon. Azteni himself seemed very reluctant to point fingers and his family praised Bruschelli for their son’s prodigious start.

What was incredibly intriguing, though, was the pure and unadulterated hatred most idle spectators — those far from the breeding, training, and riding of the horses — felt for Bruschelli.We are frequently cut to a gaggle of women, all turned away from the camera and looking out a window, as they berate him quite violently.

In that way, the many unnamed side characters of the film are by far the most interesting. We see small clips of the absolute insanity that surrounds these horses for up to four days before the race and the jockeys for much longer. “Meat to be butchered,” is how one interviewee described the profession.

I came into this film knowing that animal rights organizations hate the event. This documentary, while not glorifying that angle, certainly didn’t do anything to convince me that the horse’s welfare is at the forefront of the owner’s and jockey’s minds. The daunting lottery day process, which involves the chosen horse to parade in front of a horde of cheering, barely controlled fans is enough to convince me that something odd is going on with this whole event.

Unfortunately it is so steeped in Sienese tradition that it is a topic for the experts, not this movie review.

Overall, the cinematography and soundtrack were well done, though the editing during the first race sequence seemed very oddly paced. I’m not sure if the filmmakers were trying to ramp up the anxiety of viewers or cover up fatal accidents — at least one grey horse in the background suffered a massive fall just off screen — to keep the film objectively focused on the jockeys and not the horses, but the cuts felt too abrupt either way.

I give Palio 2 1/2 Golden Horseshoes.

Palio is available on Netflix.