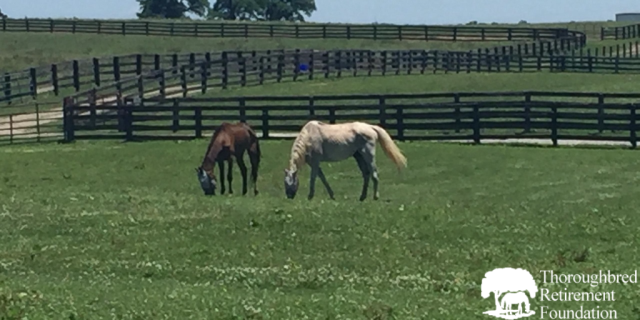 6 underweight horses are now at a Thoroughbred Retirement Foundation facility in Kentucky.

As part of our ongoing coverage of the Chuck and Maria Borell neglect case developing in Kentucky, we’re pleased to report that six of the most underweight horses have been removed from the farm in Mercer County and are now at the Thoroughbred Retirement Foundation’s Blackburn facility. The Thoroughbred Retirement Foundation, or TRF, already shared images of two of the horses in particular who have grabbed the public’s attention: Silver Cliff and Z Camelot.

Silver Cliff’s story was told yesterday by Paulick Report; the aged gelding was once a low-level claimer, then placed with the TRF to eventually be adopted out as a riding horse. He changed hands as owners’ circumstances shifted, and eventually placed with Maria Borell with the understanding (in writing) that his placer, Carrie Gilbert, would take the horse back if Borell ever found herself unable to keep him. Borell stopped responding to Gilbert earlier in 2016; Gilbert began to worry about the horse’s condition.

While Silver Cliff’s condition did indeed look dire in recent photographs, he was luckily removed from the property earlier today and is already out on grass at TRF Blackburn. We send our best wishes for his recovery, as well as the other five horses removed from the farm in equally worrying shape.

Rusty Ford, spokesperson for the Kentucky state veterinary department, issued a statement assuring the public that the horses on the farm have been receiving daily care since early June and will continue to receive care while authorities work to determine what should be done with them. The six worst cases are now removed; the remaining horses are in less serious condition. Ford stated that none of the horses were in life-threatening condition, including the six that were removed.

One of the challenges still ahead is identifying each horse on the property and identifying ownership — some horses are said t be owned by Maria Borell while others were entrusted to her care. Borell has been working as a professional racehorse trainer, with her career best achievement training Runhappy to victory in last year’s Breeders’ Cup Sprint. The lease on the farm where these horses have been languishing is under her father’s name, Chuck Borell.

If you are interested in making a donation to help support the rescued six horses, please visit TRF’s website and choose Blackburn as your designated target.

We’ll continue to follow this story as it develops.