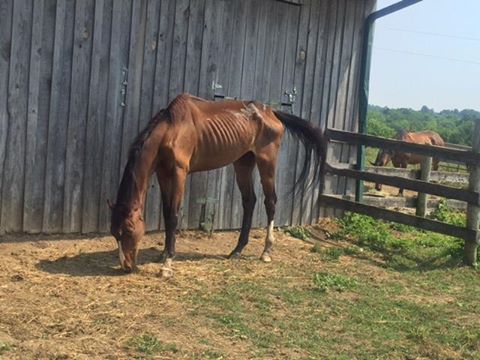 Trainer Maria Borell’s past year has been a roller coaster ride of ups and downs, but the latest twist gives her story a dark turn: over 40 horses either owned by Borell or under her care are starving to death in Kentucky.

Maria Borell may have started her career with all the best intentions: just a girl who loved horses, falling under the spell of Thoroughbred racing’s particular brand of magic. In the beginning, at least, perhaps it was all about the horses.

Her lucky break seemed to finally come when she got the opportunity to rehabilitate and train a quick-footed sprinter named Runhappy. This horse made Borell a household name among lay racing fans when he captured the 2015 Breeders’ Cup Sprint, elevating Borell from the lowest levels of racing to stardom.

Just a few months later in May, Drawing Away Stable announced that Borell had left the operation; according to managing partner Ed Boden, “she just got in over her head with finances.” Reportedly, grooms and other stable help were not being paid. Drawing Away Stable stated that the horses were in good health for the most part and had been transferred to other trainers.

Throughout this tumultuous period, there were rumblings on social media and in drawn-out arguments in the comments section on various Thoroughbred news websites that Borell not only failed to pay her bills, but was flat-out neglecting a number of horses that remained under her care.

Finally, in May, evidence of Borell’s rumored neglect came to light through Ken Summerville, a trainer who had lost a few horses to Maria Borell and her father Chuck while Summerville worked through health issues. He visited a farm leased by Chuck Borell in an effort to find his horses and was shocked to find over 40 animals in poor condition: emaciated horses were living on overgrazed pastures or locked in dirty stalls; many had injuries and no indication that they had received farrier care.

Summerville reported conditions to the sheriff’s office, which has been providing donated hay to the horses through volunteers. The horses were left in the care of just one employee who has been doing what she can to keep the horses fed and healthy. Chuck Borell has claimed alternately that he both does and does not own the animals; Maria Borell apparently took ownership of the horses and has stated that “nobody is taking my horses.”

The case has been taken over by Kentucky’s Department of Agriculture, which reports that it is monitoring the horses and working with volunteers. Many of the horses’ previous owners, who entrusted their animals to Maria Borell’s care, have been able to identify them through on-site volunteers and are trying to get the animals released back into their care; however, no horses can be released until the Department of Agriculture presents evidence to the district attorney. Owners are not being allowed to provide their own care or veterinary attention.

Among those owners are the Zayat family, best known for their ownership of 2015 Triple Crown winner American Pharoah. The Zayats have taken to social media to vent their frustration that Florida Derby runner Z Camelot, formerly of their stable, is among the horses languishing at the Mercer County farm and that they can do very little to help the horse until the Department of Agriculture moves forward. Rick Porter and Victoria Keith of Fox Hill Farm (the stable that owns champion filly Songbird as well as other well-known stakes winners) have visited the farm in person to help shine the spotlight on the neglect.

A meeting was to take place today, June 27, to help the case move forward. Concerned horse owners will be pushing for action to allow these horses to be seized from the property so that they can receive the proper medical attention they so need. While it’s a hard truth that the legal system moves slowly (on purpose) so that evidence can be properly gathered and documented to ensure a strong case, it’s also incredibly frustrating when animal lives are on the line.

And as for Maria Borell, it’s hard to say from an observer’s point of view exactly where things went wrong: what exactly made her unable to ask for help? Does she truly believe that these horses are healthy and well-managed? Did financial straits push her to make difficult choices, a run of bad decisions that landed her where she is now?

We’d like to think that underneath it all there’s still that same love for the horses that drew her to this world in the first place. But it’s hard to look at these images and still believe.

UPDATE: Tuesday, June 28 at 4:04 PM. Six underweight horses, including Silver Cliff and Z Camelot, have been removed from the farm to a Thoroughbred Retirement Foundation facility in Kentucky. Click here for our continuing coverage.

CORRECTION: An earlier edition of this article stated incorrectly that Z Camelot was a Florida Derby winner; he was an entry but did not win. The article has been corrected.

[US Racing: The Shocking Untold Story of Maria Borell]