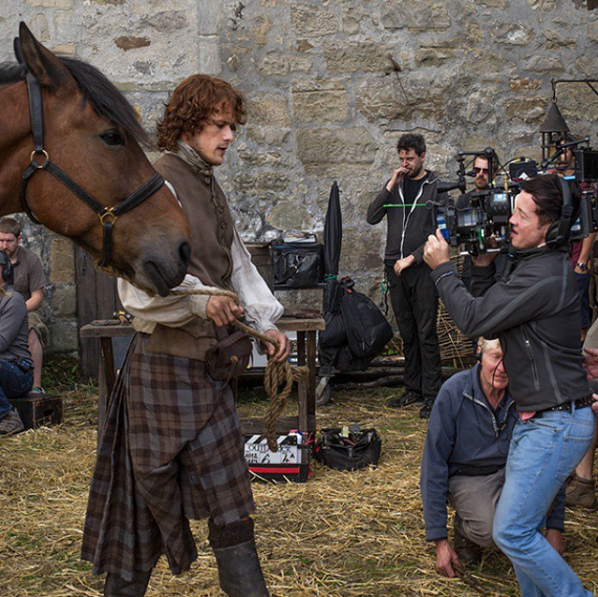 Fat horses, flatulence and barn rats — just another day on the set of Starz’ hit show.

In an interview with Nuke The Fridge, Caitriona Balfe described Travis as a “… gorgeous chestnut fat fluffy guy. He’s very funny.” Unfortunately, Balfe might have her horse colors mixed up, since the only horse she regularly rides on the show is a bay. Still, they’re awfully cute together.

All the actors completed a horseback boot camp before filming.

“We’re jumping on and off horses quite a lot,” Balfe said. “The guys are horse riding and sword fighting and all that kind of thing. That was mostly mine. The lads obviously had to do a lot more swordfighting and fight training, all that kind of thing.” Sam Heughan, who plays Jamie Fraser, told Just Jared, “I had to learn horse riding for the job, and I absolutely love it. It’s great fun.”

“Sleepy is my main horse, and he’s awesome. Nothing scares him, nothing phases him, he’s very, very intelligent. The other one is called Pinocchio, who’s like a stallion, and he constantly dribbles on my sleeve, and bites me.” In a separate interview, he said, “Then in the second half of the story, Jamie gets a new horse which is the devil. So they got this new horse called Pinocchio. He also looks amazing. He’s a big Friesian stallion. He’s a bit of a brute which I love but he’s perfect for the part. I really enjoy working with him.” When asked what his favorite prop on set is by Just Jared, Heughan said, “Probably my horse. He’s not really a prop, in fact, he’s got a life of his own. But I love him.” He told The Inquirer, “Jamie’s very much a horse guy. I spent a lot of time in the stables and got to learn about horses. There was a scene with Sleepy. I was stroking his ear because it’s one spot that he loves me to stroke. His lips go like, “Duh.” So I kept stroking his ear. Then in the actual scene, Sleepy kept butting me to give him a stroke.”

Caitriona Balfe has trouble keeping a serious face when there’s equine flatulence involved. Balfe told The Vulture, “It’s always rather unsexy when you’re riding behind a horse that has incredible flatulence and you’re trying to be serious in a scene and that’s just silly. It’s very unsexy. There was one [scene] where I’m on the horse with Sam and we’re riding up to Castle Leoch, and I think it’s like the end of episode two, and Duncan Lacroix’s [a.k.a. Murtagh Fraser’s] horse, every time. It would be quiet, and then they’d say, “Action,” and every time, I’m supposed to be coming awake and looking at the castle, but I just had to keep my head down because I was giggling so much. And our director was like, “Caitriona, you’re supposed to be awake,” and I’m like, “I am!””

Them’s fighting words since Balfe sounds like a bit of a barn rat as a child. She told Nuke The Fridge, “I had ridden horses sort of when I was kid. I’d never really taken proper lessons but our neighbor used to have a horse. There used to be about four or five of us on it and I was the smallest one so I’d be at the top of the neck. Whenever it would bend its head, I would fall off.”