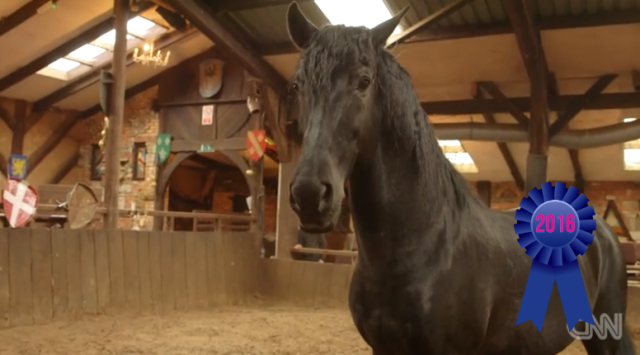 If you haven’t caught up, spoiler alert!

Daniel Naprous told CNN, “If they want a black horse, it’s got to be black and then afterwards it’s temperament and breed.” This probably means the Friesian train won’t be leaving town anytime soon. Who needs historical accuracy when you have Friesians?!?

The horses charging Jon Snow in the “Battle of Winterfell” were real.

In the Anatomy of a Scene extra, Kit Harington said, “When we had horses charging past me, those are all real horses. Until the last minute I was stood facing off against this cavalry charge, which is really scary. I’m a bit annoyed because I think everyone will think it’s CGI, and it wasn’t.” There were 40 horses charging our beloved Jon Snow.

Camilla Naprous is the Horse Master on set.

Camilla wasn’t satisfied with the horse action on previous seasons, but called the Battle of Winterfell “adventurous.” Her resume is chock full of other great movies including Les Miserables, Far from the Madding Crowd, Pan and a new King Arthur film!

The horses are trained to pass through 2 foot “channels” when they lose their rider in order to “clear out.”

A remote control arm called a “Russian Arm” attached to a Land Rover is used to track galloping horses.

Horses gonna horse, even in front of the Lord Commander.

Apparently, horses kept interrupting the takes. Speaking to Entertainment Weekly, director Miguel Sapochnik said, “They sh– and p— all the time. They would fart and pee a lot, often in the middle of [Harington’s] lines.”

Critiquing his work or giving him direction? I’ll let you decide, Horse Nation.

Watch the full Anatomy of a Scene: