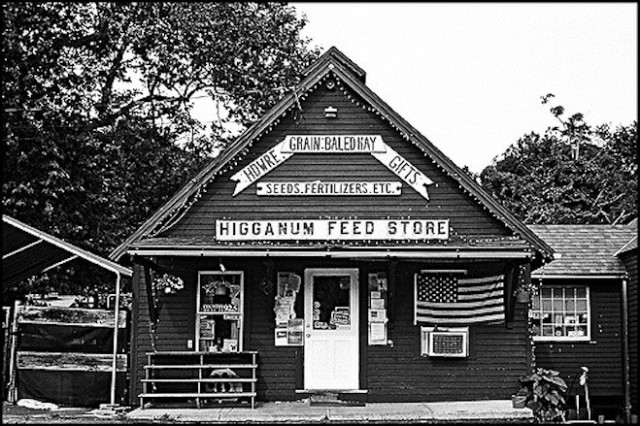 Akin to the equestrian’s bar.

Ah, the feed store, that great melting pot for equestrians. Hunter, jumper, dressage, barrels or weekend trail warrior — all of our horses need to eat, which means we all need to take a trip to the local feed store from time to time. Here’s a tongue-in-cheek list of the seven people you might meet at your favorite shop.

Dora will have 3 kids clinging to her legs, her hair looks like it needs to be washed…last week, and you’re almost tempted to give all your loose change to her. Dora doesn’t have enough hours in the day, or days in the week. She’s always frazzled and always feels two steps behind. She works full time and takes care of her family full time, plus has 12 horses to tend to. People awe in amazement at her ability to carry three kids, two bags of feed, and her son’s pet hamster, all while being able to reach into her purse without putting anything down.

Harry is a jack of all trades. All his clothes have permanent oil stains on them. He can fix your car, stucco your house, and cut your lawn. He’s the neighborhood handy man. He goes to the local feed and tack store to stock up on grain for his horses, beer for his thirst, tobacco for his cigarettes and cat food for all the feral cats he takes in.

Sarah will never take her eyes off her iPhone. She wears high heels, carries a Gucci purse, and her nails and hands look like they’ve never seen dirt. She only goes to the feed store when all three of her grooms can’t make it to work because the bus broke down, and her horses need their supplements … right now!

Tara’s a vegan and she makes her own clothes out of recycled newspaper and soda cans. She thinks owning horses is cruel, especially if you ride them. She has been arrested three times already this year for “freeing” all the horses in a five-mile radius. She likes to hand out flyers in front of the store to remind you why owning horses is cruel, especially if you blindfold them in the summer. She will buy bird food and feed all the birds in the parking lot on the weekends.

Ned is going through a mid-life crisis and just bought his first horse. He doesn’t know the difference between a forelock and a fetlock, but he’s ready to get to riding to meet some single cougars that are on the prowl. He likes to stock up on all the new tack arrivals and uses hoof polish like it’s going out of style.

Corey is in her second year at college. She has a full course load and also works full time at the feed store so she can keep her horse that she’s had since she was 13 years old. She has such a busy schedule, she only has time to ride once a week, but she is at the barn twice a day to feed and clean. She knows after only 8 more years in school, her doctorate will pay off and she’ll have time to ride. Hopefully her horse will still be alive.

Becky sold her last horse 20 years ago to raise a family. Now that her kids are all grown, she has time for herself. She doesn’t bounce like she used to, and likes to stock up on vet wrap, band aids and helmets every time she’s in the store. She’s trying to convince her husband to ride, but it seems like a lost cause. She’s crushed that she doesn’t look good in breeches anymore, so she decides to take up western riding, at least until her gym membership pays off.

Who would you add to the list? Let us know in the comments section! Go riding!