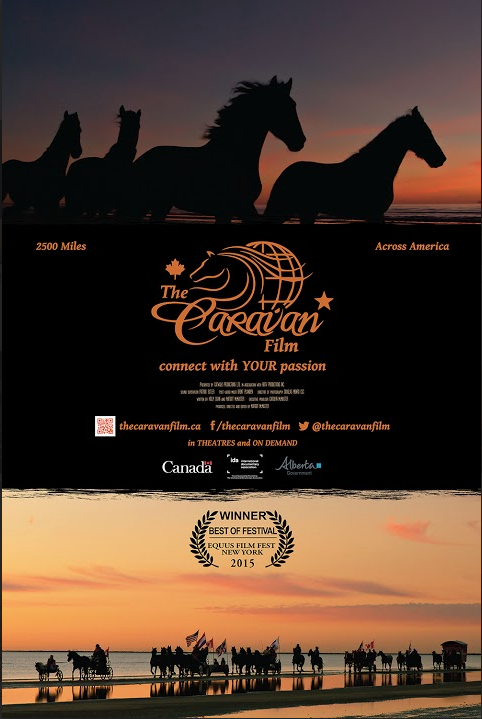 This week we look at a documentary covering a five-month, 2,500 mile journey across America.

All photos screen capture courtesy of The Caravan movie.

Led by Gerard Paagman, famous for his Friesians featured in The Hunger Games, and long-distance driver Michael Muir, a group of adventurers start their journey in California. Their planned route would take them on the historic Butterfield Overland trail, through the rugged southwest and deep south to central Florida.

Within days, the reality of the journey came to the forefront. The biggest problem the group faced was that major portions of the historic trails were now paved highways. One participant, Doug, voiced strong opinions that the group needed to find a way to travel via horse or carriage the full 2,500 miles while Gerard and Michael agreed portions were unsafe for travel and the horses needed to be hauled. In the end, the group agreed to disagree with Doug and a few other participants going their own way while the main group stuck to the highway route.

Worn horseshoes, traffic, dust storms, broken rigs, and the reality of finding food and water for so many horses and humans on the road all cause problems on the trail, but the good outweighs the bad with this group. Along the way, they share their experiences and love for horses with everyone they meet.

In that way, this film is in direct opposition to Unbranded (2015), a similar documentary about another cross-country trek. The Caravan is a full-scale production complete with marching bands and small town parades when compared to the quiet, unassuming cowboys who rode their Mustangs through parts unknown.

That’s not to imply that The Caravan isn’t a beautiful movie. There are beautiful vistas aplenty, particularly when they arrived at the Bolivar Peninsula of the Texas coast.

I also loved the closing images as the caravan pulled into their final Florida destination.

Filmmakers Margot McMaster and Doug Munro did a fantastic job of showing life on the road with such a varied and dynamic group. The Sonora Desert, Texan coast and Florida swamps provided beautiful backdrops as we learned about the individual goals, dreams and fears of the participants.

I particularly loved Michael’s story. He is disabled and bound to a wheel chair, but as Gerard said, “He teaches that most limits are only limitations in our mind.” His work with veterans and people living with disabilities throughout the journey is absolutely inspiring.

I was also touched by the words of breast cancer survivor Peggy from California. She stated the number one thing living with and surviving cancer taught her was, “Make up your mind. It is so powerful to make up your mind.” That mantra led her to purchase her horse and join the life-changing caravan.

But, although the stories were inspirational, I never felt deeply connected with any one particular “character” — a downside of featuring so many individuals throughout the course of the almost two-hour film.

I also disliked the narrator’s voice, which maintained a clinical tone of disinterest throughout the film, and the lack of inspiring music. To go back to Unbranded, I think the production team made an amazing choice in Lord Huron’s “Ends of the Earth.” From the first moment I watched that film’s trailer, the song became inextricably linked with the idea of a long, dusty trail ride. In comparison, The Caravan went with indistinct background filler that didn’t always match the visuals or, towards the end of the film, bubble gum pop songs more suited for a children’s movie.

I give The Caravan 2 1/2 Golden Horseshoes.

The film is available now directly at thecaravanfilm.ca. Theatrical distribution and continued screenings across North America will be forthcoming at a later date. Also check out: https://www.facebook.com/TheCaravanFilm