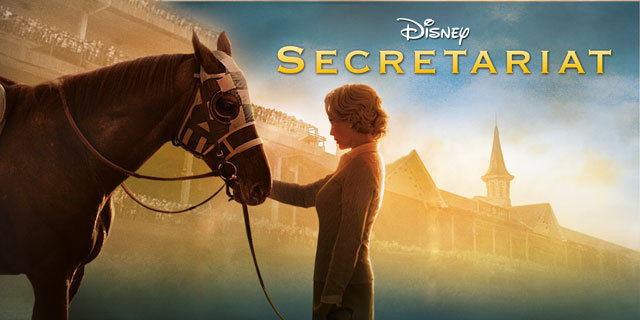 We watch the 2010 Disney version of Big Red’s run to prepare for this weekend’s Belmont!

I should start off this review by saying I know absolutely nothing about horse racing. Statistics, who’s running, who won — though I do know the name American Pharoah even if I couldn’t pick him out of a crowd– who lost, historical facts… I’m basically the Jon Snow of horse racing. I know nothing. Still, I watch a lot of horse racing movies and this one is of my favorites.

The story opens in the hectic household of Penny Chenery, where Penny is busy making breakfast for her husband and four children. After her mother’s death, she travels back to The Meadow, her family’s Virginia horse farm. Her father seems inconsolable after the death of his wife and Penny quickly realizes she’ll have to take over the financially failing farm.

In a scene that can probably only be found in horse movies and not in real horse life, Penny, her son, Lucien Laurin, groom Eddie Sweat and several other people are all present for the magical birth of the foal. Little ‘Big Red’ is immediately granted the title of “Fastest Standing Colt” and everyone watches in awe.

We fast forward to Secretariat’s two-year-old year, where Penny is struggling to balance life at the horse farm with her family. To make matters worse, Red’s first race ends with a lackluster fourth place. After the disastrous run at the Aqueduct, Chenery hires experienced jockey Ron Turcotte. The pairing would prove extremely productive — as proven by a montage of slow motion racing, piles of trophies and the whole team giving Big Red a bath — garnering Secretariat the title of Horse of the Year.

Penny takes some serious chiding from the good old boys. To which she smiles and casually replies, “Mine’s the big red one and he’s going to beat ’em all.”

Back at home, Penny struggles with the sudden death of her father and a six million dollar debt in estate taxes. Penny continues her successful string of bold acts by syndicating Secretariat, selling thirty-two shares, and setting her eyes on the Triple Crown. Along the way, Red finds himself a rival in Sham trained by Frank “Pancho” Martin. Up until this point in the film, Penny is faced with societal pressure of being a woman in a man’s world and financial troubles that are always the bread and butter of horse movies, but Martin represents the movie’s first “villain.” It’s probably a bad portrayal, but still makes the movie exciting. The naysayers think they are proven right when Red flails at the next big race, the Wood Memorial, due to a mouth abscess. For some reason, though, Sham’s team is portrayed as celebrating in the next few scenes when, in fact, he didn’t win either. Toss it up to Hollywood propaganda.

Next is the Kentucky Derby and Preakness, which Red conquers with Sham nipping at his heels in second place. Will Secretariat win the Belmont and secure his place in history as a Triple Crown winner? History aside, you’ll just have to watch and see!

I enjoyed this movie, though, it is still probably my third favorite racing movie after Seabiscuit and Ruffian. It definitely has the production value of a big budget film and is well-acted with Diane Lane and John Malkovich at the helm. The interplay between those two characters, especially the laugh out loud one-liners from Malkovich are what really make this movie special.

I couldn’t find much background information on “Trolley,” one of the horse’s used to portray Secretariat, but I did find this Youtube video about the selection process.

From the research I did, the historical accuracy of this film was not very good. Steven Crist, of the Daily Racing Form, had this to say: “We never hear about Secretariat’s stride, or the literal size of his heart, or the uniqueness of the racetrack accomplishments that defined him. Instead his greatness is attributed to formulaic mush about his bond with his supposedly down-on-their-luck connections (who had won the Derby a year earlier), his “will to win,” and perhaps divine intervention … The idea that Secretariat had to win the Triple Crown to save Meadow Stud is sheer fiction and also ignores the contributions of Riva Ridge – who won the Kentucky Derby and Belmont Stakes for Chenery the year that Secretariat was a 2-year-old but is not once even mentioned in the movie.”

Still, the race scenes are inspiring. You simply can’t help but be swept away as Red finishes a staggering thirty-one lengths ahead in the Belmont as “Oh, Happy Days” blares through your television speakers.