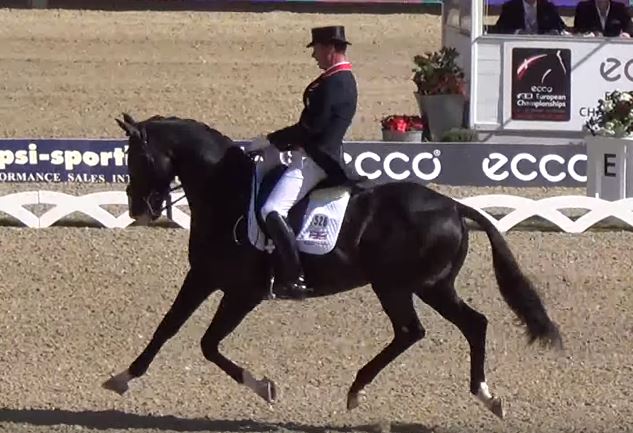 Over the weekend, Carl Hester shared on his Facebook page that the mysterious bidder who ultimately won Uthopia at a public auction house was not affiliated with him or his investors, and the new owner of the stallion remains a mystery.

According to Horse & Hound, a British equestrian publication that’s been following the story, the auction house does not release the names of winning bidders as a policy, but did state that they “did not recognize the name” of the bidding war. Uthopia was sold for £165k, which is equal to approximately $241,065.00.

In late April we shared the distressing news that Carl Hester’s much-loved mount Uthopia, with whom Hester helped Great Britain win team dressage gold at the 2012 Olympics in London, would be sold at auction without reserve as a result of bankruptcy proceedings by the managers of the owners’ estates.

A wave of public support from all around the world flooded social media, with fans offering donations of money to help Hester purchase Uthopia. Carl stated on his Facebook page that they felt confident that they had secured the necessary funds to purchase Uthopia, and that no funds from the general public would be necessary.

The auction included everything from sports cars to designer aftershave, and numerous Rolex watches. Uthopia was one of the most expensive and drawn out bids of the day, with the full bidding process lasting nearly 15 minutes.

While fans are understandably disappointed, the high price assures a certain positive outcome for the horse, and when the stallion ultimately stands at stud, the outcome of his purchase will be more fully publicized. If we learn more, we’ll be sure to bring the news to you here.