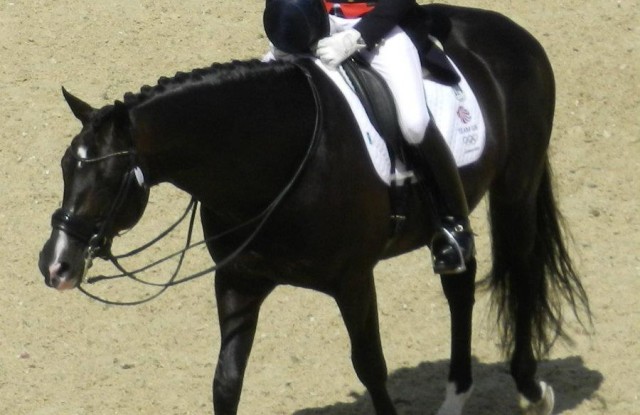 Shocking news broke yesterday that Carl Hester’s 2012 Olympic mount Uthopia was to be auctioned off without reserve on May 27 as a result of owners’ declared bankruptcy.

In 2012, Carl Hester and Uthopia helped clinch England’s team gold in dressage. Now, in an unanticipated turn, the stallion is scheduled to be auctioned on May 27 via Wilsons Auctions without reserve. Online bids will be accepted.

The controversial move comes as a result of Uthopia’s owners, Sasha Stewart and her father Derek Harrison, declaring bankruptcy. Tom Keenan and James Neill currently hold the joint ownership of the horse, as trustees of the bankrupt estates. Other possessions, including cars and jewelry, will also be available in auction.

It’s one thing to disperse inanimate objects in a bankruptcy sale — but it’s another thing entirely to auction arguably one of the world’s best dressage horses who has been a part of Hester’s yard for fifteen years. Uthopia was listed with the FEI as being joint owned by Hester and Stewart since September of 2011, but Hester confirmed that he no longer has any ownership of the horse.

Uthopia will continue to live at Hester’s yard and remain under his management through the auction. The auctioneers have released a statement promising that they are taking the welfare of the horse very seriously, though there is no provision that the horse must remain under Hester’s care after the sale — that will depend on the decision of the new owners, whoever they may be.

Hester has stated that he is actively seeking backers to help secure Uthopia’s future, and a GoFundMe account has been set up by Stefanie Reinhold. Be advised that as of the time of publication, Carl Hester has not commented on this crowdfunding account or confirmed that this is in accordance with his wishes and intentions.

Watch Hester and Uthopia’s freestyle from the London Olympics in 2012:

We will continue to follow this story as it develops.

[Uthopia to be sold at auction without reserve]

[Carl Hester ‘appalled’ by sale of Uthopia by auction]