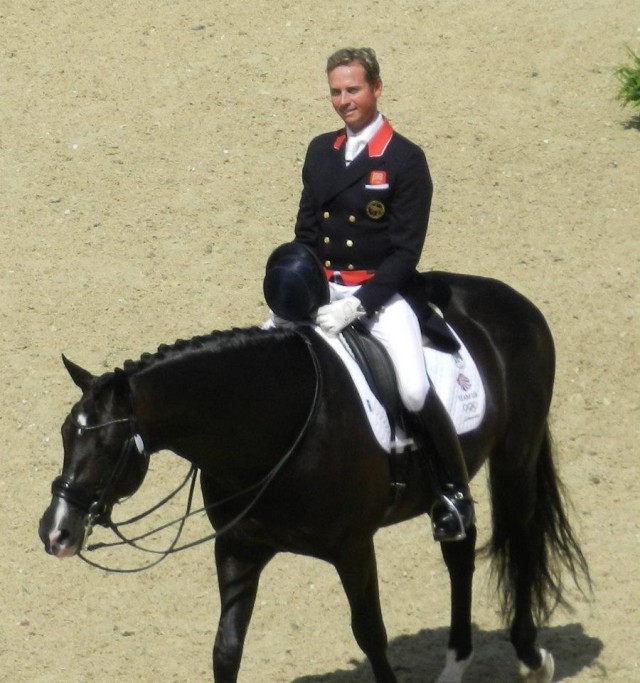 According to British news outlet Horse & Hound, Carl Hester’s longtime Grand Prix Dressage mount Uthopia has been sold in a public auction for £165k, which is equal to approximately $241,065.00. As of publication, the buyer is still unknown.

In late April we shared the distressing news that Carl Hester’s much-loved mount Uthopia, with whom Hester helped Great Britain win team dressage gold at the 2012 Olympics in London, would be sold at auction without reserve as a result of bankruptcy proceedings by the managers of the owners’ estates.

A wave of public support from all around the world flooded social media, with fans offering donations of money to help Hester purchase Uthopia. Carl stated on his Facebook page that they felt confident that they had secured the necessary funds to purchase Uthopia, and that no funds from the general public would be necessary.

The bids for Uthopia were the longest bidding war of the auction so far, which has included everything from sports cars to designer aftershave, and numerous Rolex watches.

Uthopia is being auctioned in about half an hour – follow live from the auction house https://t.co/592dfebsdA pic.twitter.com/AwrnOVrsbC

The Dressage editor at H&H had made an educational guess that based on what the stallion could garner in his lifetime in breeding fees, she estimated he would sell for about £228,479, or $333,807. Her guess was ultimately high, but not unreasonable.

The horse community is on pins and needles waiting to hear the identity of the buyer, and as soon as we know more, we will update this story, so please continue to check in on Horse Nation throughout the evening.