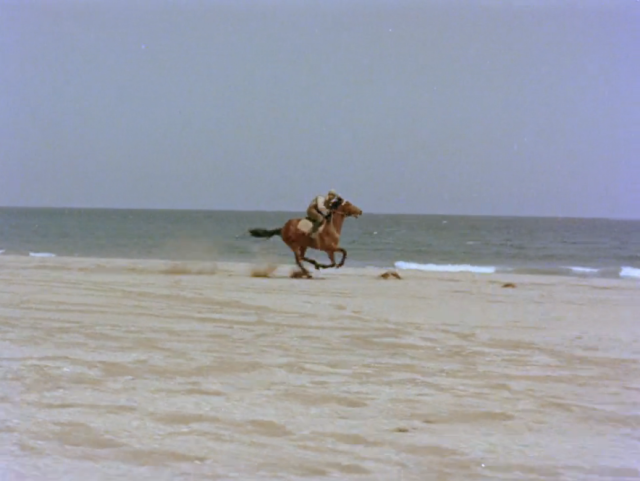 This week, we check out a classic Japanese film from 1955.

The film begins with Jiro and his school friends rushing home for the birth of a new foal. We’re also introduced to his extended family, of which my favorite member is Sis. The character plays a small role throughout the film, but she has some of the best lines. When Jiro accuses her of lying about the foal being born “today,” she simply states…

Jiro finally gives up and goes to bed, only to find the new foal, Takeru, waiting for him in the morning.

The next half hour is spent following Jiro, Takeru and his friends around their idyllic provincial town. Jiro comforts Takeru by singing and playing the harmonica during the weaning process and, at one point, Jiro’s oldest brother plays a game similar to polocrosse.

Tragedy strikes when Takeru is trapped in the forest during a wildfire. Jiro’s father rushes in and saves the horse, but is badly burned. On his deathbed, he tells his children … specifically middle son, Ichiro … to follow his dreams even if they are risky.

After their father dies, Sis is faced with losing the farm. She puts all her faith in Takeru, whom their father believed could be the best horse in Japan, and sells the other horses. Soon after, Ichori and Takeru are spotted by rich investors while exercising on the beach and sent to Tokyo to train.

The story picks up a year later, when Takeru is entered into his first race. It doesn’t go well.

The veterinarian diagnoses Takeru with PTSD-like symptoms caused by the trauma of the wildfire and induced by the roar of the race fans. With the fate of the family’s ranch at stake, can Takeru pull it together and win his next race? You’ll just have to watch and see!

I was incredibly surprised by how much I enjoyed this movie. Though many of the lines were performed with the sort of deadpan tone that all films hailing from the 1950’s are known for, I still connected with the characters. Jiro was the epitome of a “barn rat” and the little boy that played him, Yukihiko Iwatare, did an amazing job portraying raw emotion during the father’s death.

The character of Sis was also very well played. Though she had few lines, the actress, Yoshirô Kitahara, had an incredibly expressive face. I also enjoyed the fact that the filmmakers created a female protagonist saddled with owning a ranch, rather than pushing that storyline onto one of the brothers.

With those performances, the beautiful Japanese landscape and wide panning shots, it’s no wonder the film was nominated for an award during the 1956 Cannes film festival. I also want to commend the writers for doing actual research about horses and training. When Jiro calms Takeru by playing the harmonica, we aren’t led to believe it’s because of some mystical connection between boy and horse, but rather the horse being trained to associate that sound with the comforts of home. When Takeru colics, Jiro stays by his side through the night, but so does a veterinarian. Modern horse movies seem to rely less and less on actual horse care information, so this was a nice change of pace.

I give The Phantom Horse (1955), available on Hulu, 3 1/2 Golden Horseshoes and I warn you, the ending is a complete tearjerker.