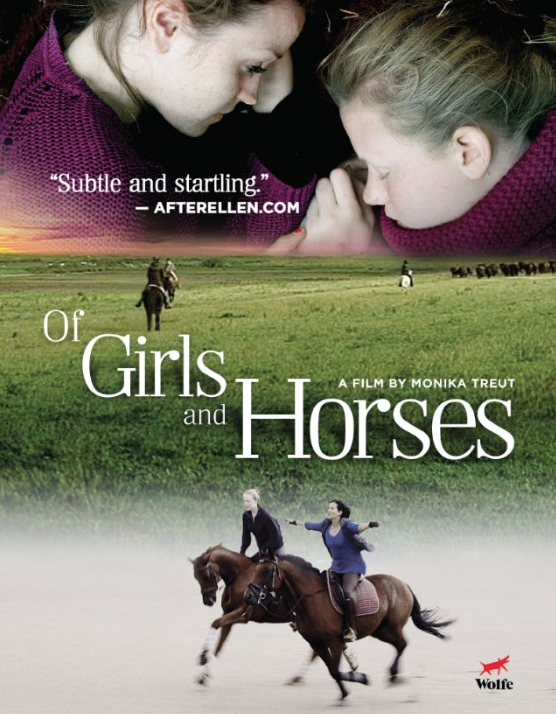 This week we look at a German indie film.

I should start this review by saying, I generally hate indie films. Even worse, I loathe movies that come across as trying to push a political agenda rather than telling a good story. Sure, sometimes writers can do both at the same time — think Animal Farm, Fahrenheit 451, arguably, even the Hunger Games — but you have to be an astounding author or filmmaker to pull it off without seeming overt. Monika Treut, director and writer Of Girls and Horses (2014), does not master this skill.

The movie begins with the arrival of our lead protagonist, Alex, on a rural horse farm. She’s the picture perfect “delinquent at the start of every horse movie ever.” Alex smokes. She steals drugs. She awkwardly tries to kiss her new boss, Nina, during her first riding lesson. Alex does, however, seem to genuinely love working at the farm and horses.

Enter Kathy, an accomplished rider training at the farm. Whether or not Alex was jealous of Kathy taking up Nina’s time or her freedom to “holiday” with horses in general is left ambiguous. With only one line of dialogue for every ten minutes of film, we were left with little more than awkward stares and weird interactions.

Inexplicably, the girls become friends. Kathy splits her time between training with Nina and goofing around with Alex.

Somewhere in the hour and half long montage of their budding friendship, we are given a glimpse of Nina’s home life. Separated from her girlfriend that lives in the city, the trainer is struggling to keep a happy work/home balance. I’d like to tell you more, but we are thrown into this story arc with no warning and no resolution. I’m pretty sure it was added solely so Treut could include a very rated-R bedroom scene.

Nina’s trip to visit her girlfriend was also needed as a plot device, forcing her to leave the two teenage girls in charge of the farm. Never a good idea, honestly.

What will happen next? You’ll just have to watch and see!

Now, you’re probably thinking, “That is the shortest movie recap Amanda has ever written.” You’re right, it probably is, but that’s because this movie had no character development, very little story arc and was, quite honestly, an hour and half long montage of two girls goofing off when they should have been caring for horses.

The filmmaker, Monika Treut, is a well-known feminist and LGBT activist. Do I care that this was clearly a LGBT film showcasing two lesbian relationships? Absolutely not. What I care about is the fact that these characters were shoved messily into romantic encounters that were never explained. We, at no point, were given an in-depth look at any background information. It’s hinted that Alex is destructive and clearly uses self-mutilation, drug and alcohol abuse and sexuality as defense mechanisms, but it’s never fully discussed. In my honest opinion, it would have been a bolder filmmaking choice for Alex to develop an entirely platonic relationship with Kathy. The fact that Treut forced it in a romantic direction implied the character’s story arc remained as stagnant as the mudflat featured.

Overall, the characters were badly written and the acting poorly done — though you could easily tell the actresses playing Nina and Kathy were at least accomplished equestrians. The cinematography must be commended, though, because the landscape, wide panning shots and lighting were superb. The sound department also did an excellent job by including the snorts and huffs of horses in the pastures and gentle hoofbeats in the indoor riding arena.

I give Of Girls and Horses, available on Netflix, half a Golden Horseshoe.