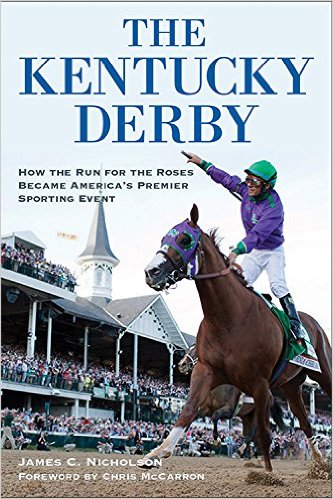 Can you guess the only sitting president to ever attend the Derby? Hint: the answer is hilariously unsurprising!

Courtesy of University of Kentucky Press

James C. Nicholson’s book The Kentucky Derby: How the Run for the Roses Became America’s Premier Sporting Event is a positively delightful read for anyone who gets a little misty-eyed when they hear “My Old Kentucky Home”. It’s written with undeniable spark and sentiment for the event, but also fearless objectivity when discussing the many dark and complicated periods of Churchill Downs’ history. In 2012, the book won the Kentucky History Award for Literature.

If you’re a horse fan, a history fan, a racing fan, and/or any combination of the three, you simply must have this book in your collection. We’re including below a fraction of the impressive facts delivered by the book — just enough to give you a taste, but not too much to give all the fun away!

1. “Black Jockeys won half of the first sixteen Derbies, and fifteen of the first 28.” In the antebellum years, jockeys in the south had been slaves, and many stayed on in that capacity with their white former masters after emancipation. By the turn of the century, African American jockeys were making a better living as athletes, and many were famous. Isaac Burns Murphy, Willie Simms, and Jimmy “Wink” Winkfield won multiple Kentucky Derbies, and were acclaimed, until the public favor evaporated for black athletes, and these masters of riding disappeared into obscurity.

2. One of the most exciting Derbies of all time was in 1920, despite the fact that Man O’War skipped it. Owner Samuel Riddle decided not to run the red colt because he thought it was too early in the year, and he was concerned about the long train ride from Maryland. Instead, a scrappy little gelding named Paul Jones held off Upset with a magnificent tear down the home stretch on a slightly muddy track in front of a record-breaking 60,000 fans. Coincidentally, it was Upset who had handed Man O’War his only career defeat the year before.

3. 1929 was the last time in the 20th century that a gelding won the Derby. His name was Clyde, and he was scraggly and adorable. Also, he was the son of Man O’War, so I’m sure that didn’t hurt.

4. The 1933 Derby basically ended in a fist fight. Jockeys Don Meade and Herb Fisher came to blows in the home stretch while still racing, but I dare not spoil the play by play or tell you who won. You’ll have to read the book for that!

5. America’s Triple Crown was not the first. The first triple crown actually described three races in England (and still does, for that matter): the 2,000 Guineas, the Epsom Derby, and the St. Leger Stakes.

6. Hertz Rental Cars bought us a Triple Crown Winner. John D. Hertz, owner of the Hertz Rental Car fleet, was also owner of Count Fleet, who provided an emotional victory for America in the heart of World War II. Because travel was restricted to save fuel, there was some concern that any horses or fans would show up at all, but in fact 50,000 people arrived to watch Count Fleet take the first jewel of his triple crown. (He also raced in and won the Withers Stakes between the Preakness and Belmont!)

7. Oh, and you can thank Baking Powder for Calumet Farm. William Wright founded Calument Baking Powder in 1888 and in the 1920s, his son sold the company to General Foods for $32 million, and sank the earnings into Calumet Farm. Since then the farm has produced racing icons like Whirlaway, Citation, Tim Tam, and Alydar, and is a must-see stop on the Kentucky thoroughbred farm tours.

8. The Derby would again be the backdrop of a pivotal moment in African American history in the late 1960s. Martin Luther King, Jr. didn’t attend the Derby itself, but he was in Louisville the week of the race in 1967 to support black protestors who were using Derby week to shine a light on the abhorrent issues of race-based housing discrimination in the city. Five black teenagers had lined up on the track during a race at Churchill Downs in protest, and there was concerns of violence as the KKK flooded to city to “keep the peace”. The race went on without disruption, but the events highlighted that not all was as peachy in Kentucky as white aristocrats would have America believe.

9. Richard Nixon is the only sitting President of the United States to attend the Derby. His attendance was in his first year as president in 1969, as he had attended the previous year on the campaign trail and promised the Kentucky Governor that he would return for the Derby as president if he won. He did not place a bet, but there are conflicting stories as to whether or not he was rooting for that year’s winner, Majestic Prince. He was also the first to attend a horse race as President since Rutherford Hayes.

10. Mine that Bird and Barbaro share a special Derby Connection. After Mine That Bird won the 2009 Derby as an incredible 50-1 shot, his trainer and owners held court in front of Churchill Downs and the newly unveiled statue of 2006 winner Barbaro, who died of injuries sustained in the Preakness Stakes. Chip Woolley, Mark Allen, and Leonard Blach gave out roses from Mine That Bird’s winning blanket to visitors as a way to remember Barbaro, and honor his place in Churchill Downs’ History.

This list barely scratches the surface of Nicholson’s incredibly fascinating, detailed, and thoughtful chronology of the Race for the Roses. He’s both objective about the players, but deeply passionate about the role the Derby has played in America’s identity. From gunfights at the track to blind widows sobbing hysterically with joy, the twin spires have seen some truly incredible moments in history, and they are retold with exquisite reference in “The Kentucky Derby.”

I don’t always bookmark and annotate my book reviews, but when I do, it’s because it’s an awesome book. Photo by Lorraine Jackson

Many thanks to the University Press of Kentucky and James C. Nicholson for sharing their title with us. The book is available in paperback, hardcover or as an E-book.  You can also purchase it on Amazon.