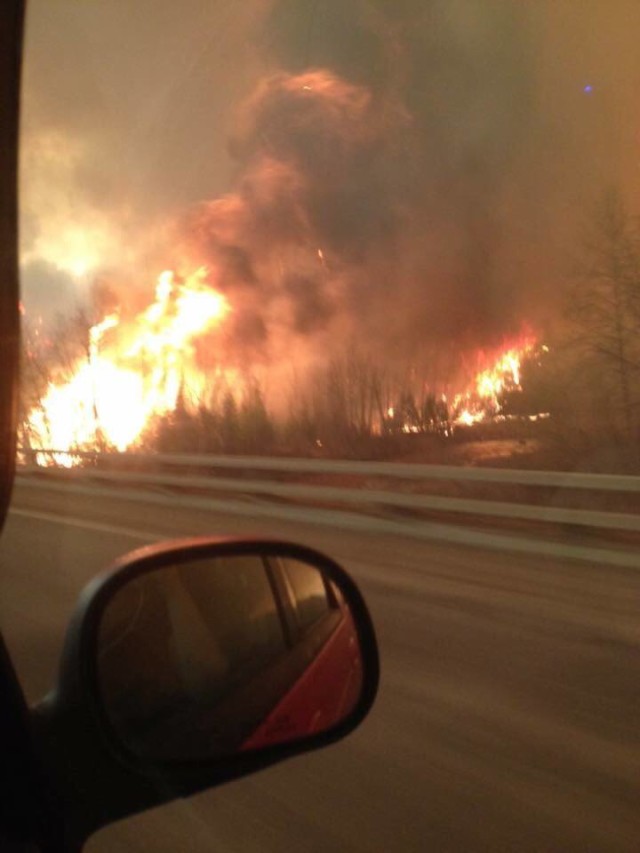 Charity Wiley, publicity director of the Clearwater Horse Club, spoke with Horse Nation to describe firsthand conditions in Fort McMurray as owners struggle to evacuate their horses from the path of wildfire.

Fire on Beacon Hill heading out of Fort McMurray. Photo by Vanessa Gessner, taken as she was evacuating her horse and Charity Wiley’s horse to safety.

The city of Fort McMurray has emptied in advance of a rapidly-moving wildfire that’s already ravaged some neighborhoods and threatens others. Among the 80,000 residents who evacuated by mandatory order, horses have been hauled to safety from the path of the flames as well — although that safety may only be fleeting as the fire continues to grow in unusually hot and dry conditions in Alberta.

We shared news of the fire’s growth and the mandatory evacuations of Fort McMurray earlier today; we were able to speak with Charity Wiley, publicity director of the Clearwater Horse Club, this afternoon to get updates regarding equine evacuations. As you may recall from our story earlier today, Clearwater voluntarily evacuated on Sunday as the wildfire initially broke out not far from the equestrian center. However, that was only the beginning of an extraordinarily challenging week — and more trials are ahead.

HN: Charity, thanks so much for your time. Where are you right now?

CW: I am currently in Smoky Lake, Alberta at my father’s house, and we will stay here until the all clear. My very very gracious neighbors loaded my mare on their trailer with their mare and hauled down to a friend’s farm in Edmonton. Initially I didn’t know if she made it out or not. They had to drive right through the flames. My mare will stay at that farm until I know it’s safe. So far our club seems to be out of harm’s way, but we are holding our breath for wind changes. No one is at the facility, but at this moment it seems to be safe.

HN: Glad to hear your horse made it out safely! The video of those three horses in the backyard in Fort McMurray [see this morning’s news post for more information] have gone viral, but if the town has been evacuated then those horses had to move again, correct?

CW: The entire town was under mandatory evacuation. Everyone who had horses out at a campground, in their backyards or sheltered at businesses fled north however the could. There is no one left in town, or there certainly shouldn’t be. Today will be a tough day. All of the horses at this point have been moved twice.

On Sunday the wind was just blowing it in our direction at Clearwater Horse Club. What happened Tuesday was that a small section of the fire jumped the river and took off in a matter of minutes due to the type of fuel that resides on that side.

Our club banded together like nothing I have ever seen. It started Sunday night with loading almost 100 horses and moving them to where we thought was safe: north, south, backyards, wherever we could. Then yesterday we were at it again. Members, not just of the CWHC, but all horse owners stayed until the last moment they could trying to get all of the horses taken care of. There are no words to describe the sense of family I share with these people. I didn’t even know where my horse was until my barn neighbor said she was on a trailer heading out. It was so selfless of them and I don’t know how I could ever thank them enough. I will just continue to do whatever I can from a distance and pray for the best. We’re preparing now for a third move.

Fire by the highway on the road out of Fort McMurray. Photo by Vanessa Gessner.

HN: So where is the nearest safe zone that you’ll need to evacuate to now?

CW: We were technically in our “safe zone”. Some people drove or even rode horseback to the highway which was about ten or twelve kilometers from the Tower Road Campground, which is where we went initially to get away from it. They found shelter in large truck shelters, or even pulled their vehicles around in a circle to create a make shift round pen.

What needs to happen next is move the horses south. The temperature is rising and the smoke is very thick — it’s not good for them. Our members that are still away are working on organizing trailers and I’ve been in contact with people from central Alberta who drove all through the night with trucks, tools and a trailer to try and help.

HN: So locating trailers is now the main priority?

That’s right. When we moved on Sunday, we had more time so we were able to make a few multiple trips. Yesterday there was no time, so basically it was a one-load shot, then the rest of them were set loose from their paddocks. They have already been able to round up a couple of loose ones.

The horses are on the north side and the trailers are on the south side. Fort McMurray is essentially separated by a river and a bridge crossing. Anyone north of the bridge was ordered to stay north and anyone south is staying south.

HN: The photo of the girl riding with her horses out of town is chilling but also inspirational. Do you know who that rider is?

CW: That is Karley Kenny. She is absolutely a die-hard cowgirl and she is fearless when it comes to her horses. I am not surprised at all she rode away with them! She is certainly fearless and loves those horses more than anything. A few of our club members took to horseback yesterday themselves. To be honest it was faster than driving a car!

HN: What is the road situation like? Was it pretty bumper-to-bumper to get anywhere?

CW: It was bumper-to-bumper last night for almost 300 kilometers. It took us nine hours to get that far. About 80,000 people have been displaced. We wanted to head south because the north direction ends roughly 200 kilometers after it begins. There is only one road in and out of Fort McMurray.

CW: As of right now, we can’t confirm if anyone can physically help. We aren’t in a shortage of hay, or water at this time and we don’t plan on sticking around, so we need to communicate with emergency personnel when it is safe to do so to allow trailers to the north to load the horses and move them. At this time I would suggest the best place to donate would be to the Red Cross. We have lots of offers for help, but at this time I can’t confirm if they’ll be let back in to the city.

HN: What a scary situation.

CW: It is but we are strong and we are sticking together to do the best we can! Fort McMurray is my home and the people who share my sentiments will never give up on it. Our hashtag is #weloveymm and you’ll see that in the upcoming days, weeks and months. Even years. We are being told the worst is yet to come, but we are staying calm and putting our horses at the top priority. No matter what, we will always share our love for horses. Hard times come and go, but we will have each other’s backs.

HN: We are thinking of you for sure!

CW: Thank you so much for your concern and well wishes!