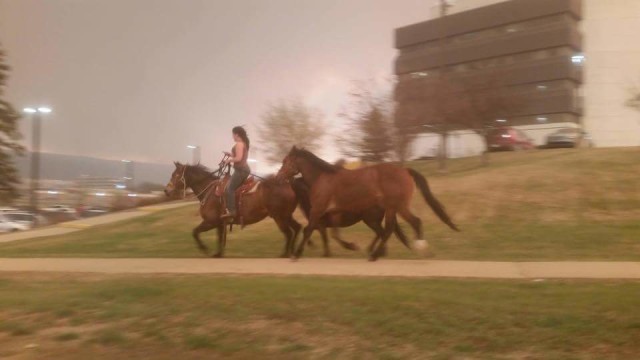 This image of a woman fleeing with her horses is going viral, underscoring the terrifying and dangerous conditions as out-of-control wildfires tear through the city of Fort McMurray, Alberta, Canada.

The entire city of Fort McMurray, Alberta has been ordered to evacuate as reported Wednesday morning due to an out-of-control wildfire that has already destroyed several residential neighborhoods within city limits. That’s an estimated 80,000 people fleeing the path of the fire, which was first discovered on Sunday and grew rapidly early in the week due to unusually high temperatures and dry conditions. Strong winds from the south drove the fire right into the city of Fort McMurray on Tuesday, May 3.

That black smoke is where we were 45 minutes ago. Terrifying. #ymm #ymmfire pic.twitter.com/u3HSHkmqaf

As a remote city, evacuation efforts have been hampered by the limited routes in and out of town. Fuel shortages also slowed progress, though law enforcement traveled the highways with stocks of fuel to help stranded motorists. Especially in bumper-to-bumper traffic, several hours are required to make it to the nearest towns and cities. Fortunately, as of Wednesday morning, there have been no reports of death or injury during this massive evacuation.

#ymmfire Us getting out of Beacon Hill! My childhood home and everything I’ve ever known is burnt to the ground. 🙁 pic.twitter.com/eY1KmCVIvi — Holly Ayearst (@hollerslyfe) May 4, 2016

Where there are people, there are animals: fortunately, the community of Fort McMurray in areas unaffected by the fire as well as surrounding communities and towns have opened their doors and their arms to help horses and other livestock as owners attempt to bring their animals to safety.

Clearwater Horse Club, located on the outskirts of Fort McMurray, was one of the first locations to be evacuated on Sunday when the wildfire first broke out:

A client photo from Clearwater Horse Club in Fort McMurray, yesterday during the evacuation. All are safe #ymm pic.twitter.com/JPVykeBYO4

Three evacuated horses from Clearwater made headlines when they camped temporarily in a backyard in the city center — however, after Tuesday’s city-wide evacuations it’s unclear whether this location was still safe or if these horses were forced to evacuate again.

Our thoughts are with everyone in Fort McMurray, equestrian and resident alike. If you’d like to help residents of Fort McMurray, we encourage readers to donate to the Red Cross, which has set up a donation site specifically for the Alberta fires. This situation is far from being under control, though reports on Wednesday morning are encouraging and state that the conditions have improved.

It’s sobering to consider the fact that what’s happening in Fort McMurray could truly happen almost anywhere to anyone. If you don’t have an emergency plan for your horses, we strongly encourage readers to review our guide to disaster plans, which is chock-full of information and links.

[The Fort McMurray fire: Here’s how you can help, and receive help]