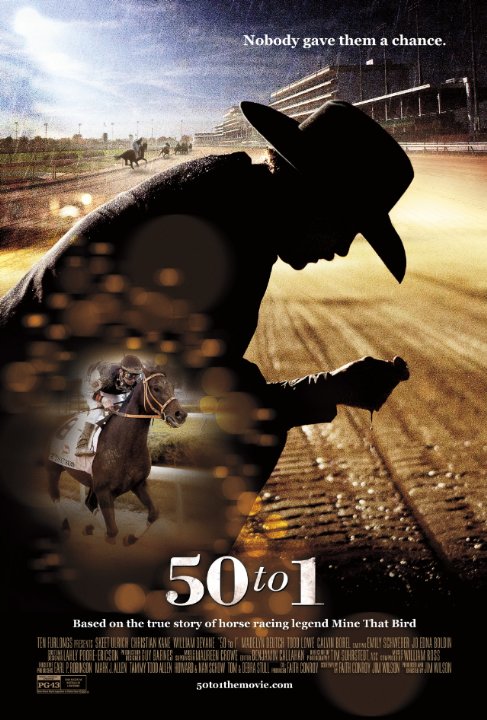 The true story of 2009 Kentucky Derby winner Mine That Bird! 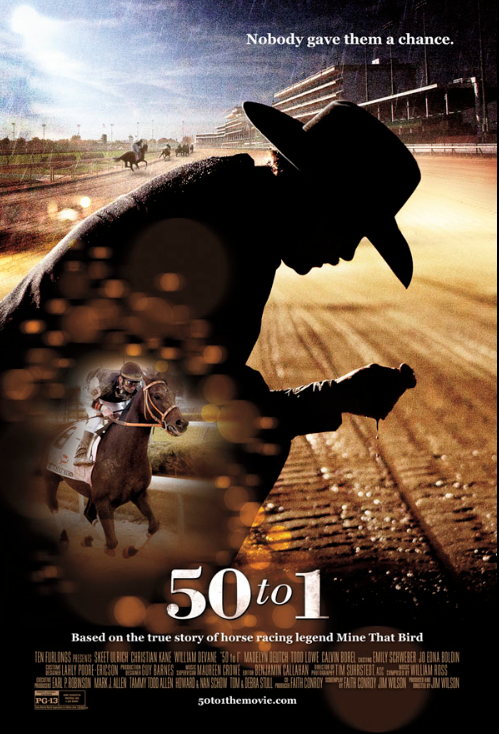 The movie begins in 1998 with Chip Woolley and Mark Allen auspiciously meeting in a barfight. Ten years later, Woolley is down on his luck with his farm headed towards bankruptcy when he hears that Allen, returned from Alaska, is putting together a string of race horses. Allen winds up hiring Woolley as his head trainer, immediately shipping him off to Canada to checkout a prospect, Mine That Bird.

Woolley is hesitant at first. The horse has a big price tag for a startup operation, he’s small “with crooked feet” and a complete handful in the stable, but everything changes when Woolley sees him on the track. 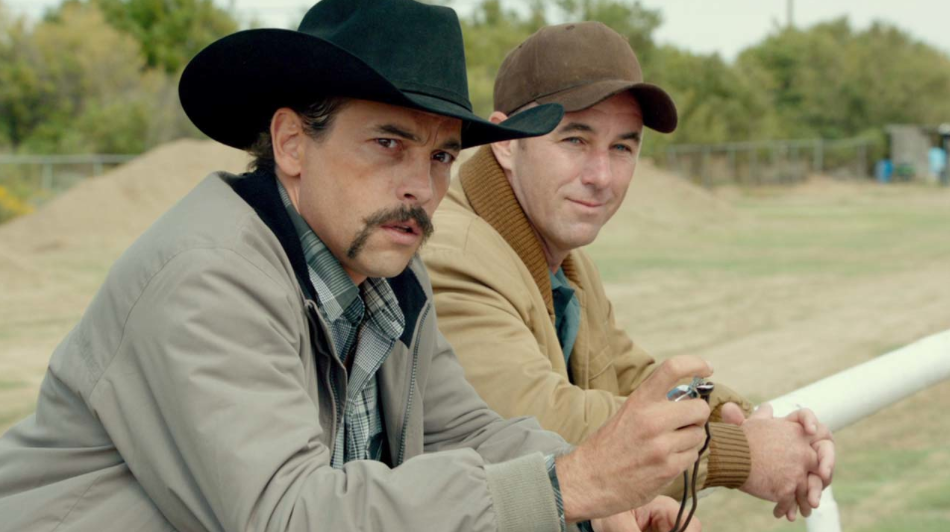 All photos are screen captures, courtesy 50 to 1 DVD.

Bird is shipped to New Mexico and immediately entered in the Breeders Juvenile cup, which he finishes in last place. In 2009, his losing streak continues with a second place finish in the Borderland Derby and then a fourth in the Sunland Derby. At home, Woolley’s ranch goes officially bankrupt. His brother says, “Bird’s all we got,” which drives Woolley into an angsty rage of reckless motorcycle madness where he fractured his leg.

Regardless of outside pressure to fire his friend, Allen sticks to his guns, keeping Woolley as head trainer and really shaking things up by hiring novice exercise rider, Alex. 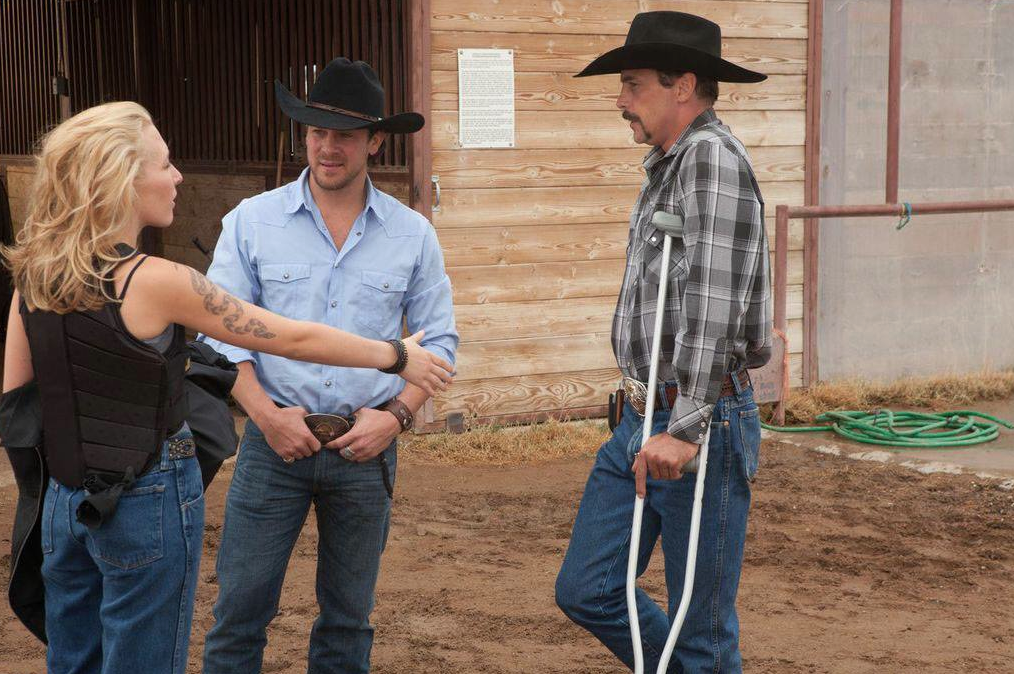 To solidify the relationship between horse and trainer, we are given an uber sweet bromance moment where Woolley and Bird bond in a moonlit barn. 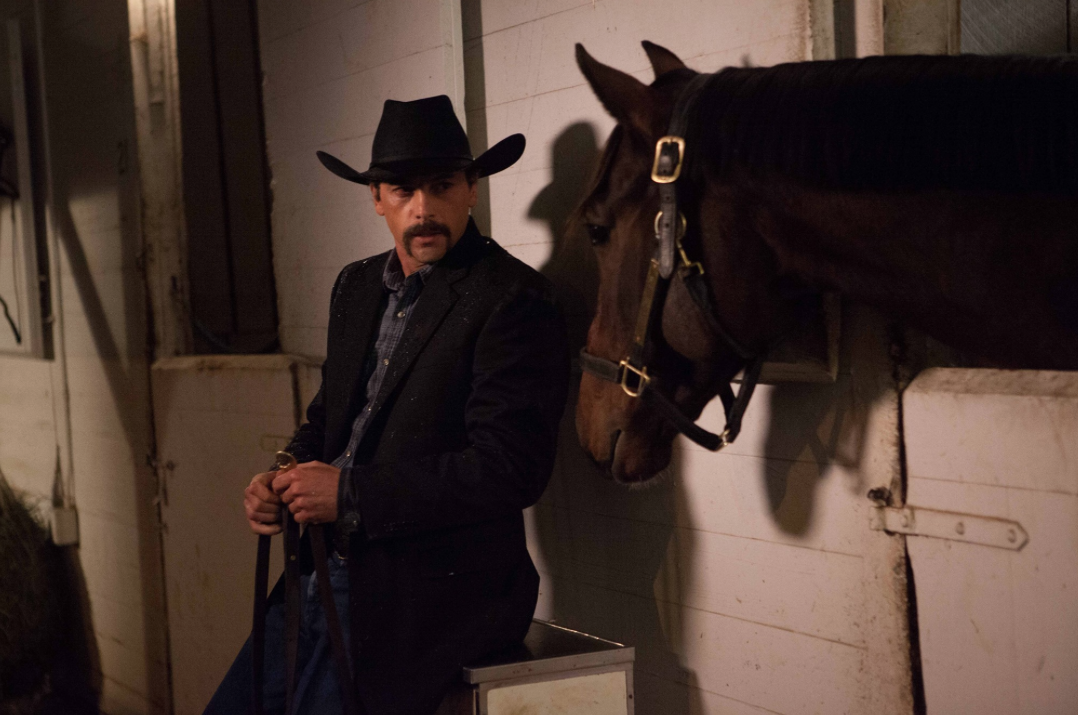 Then Allen receives a call that Bird is officially entered into the 2009 Kentucky Derby. Allen decides to shuck the odds and naysayers and race for the roses. Woolley, Alex and Bird head cross country in a pickup truck and a two-horse trailer. 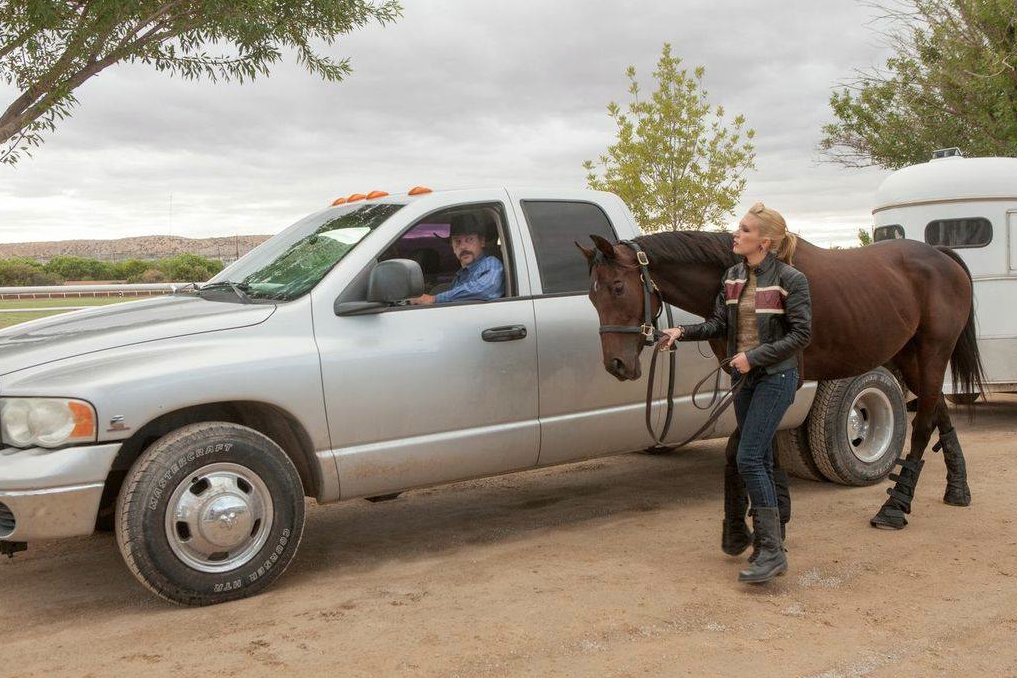 By the time they reach Louisville, word has spread about the motley crew. They face criticism and snooty remarks but the team keeps their cool and carries on until only one night remains between them and the biggest race of their lives. Woolley does all the things that proper movie horse trainers do before the finale race.  He has a heart to heart with the horse in the stable… 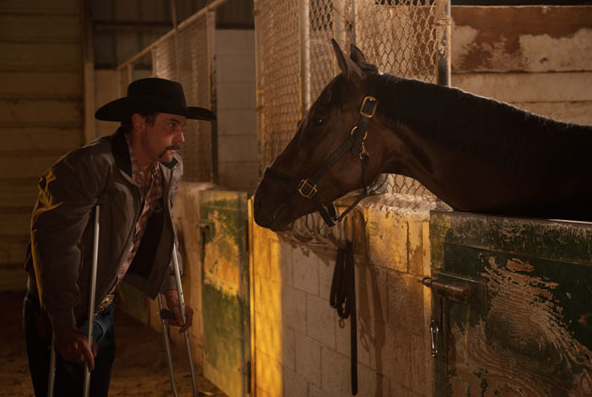 and checks out the track conditions in the dead of night. 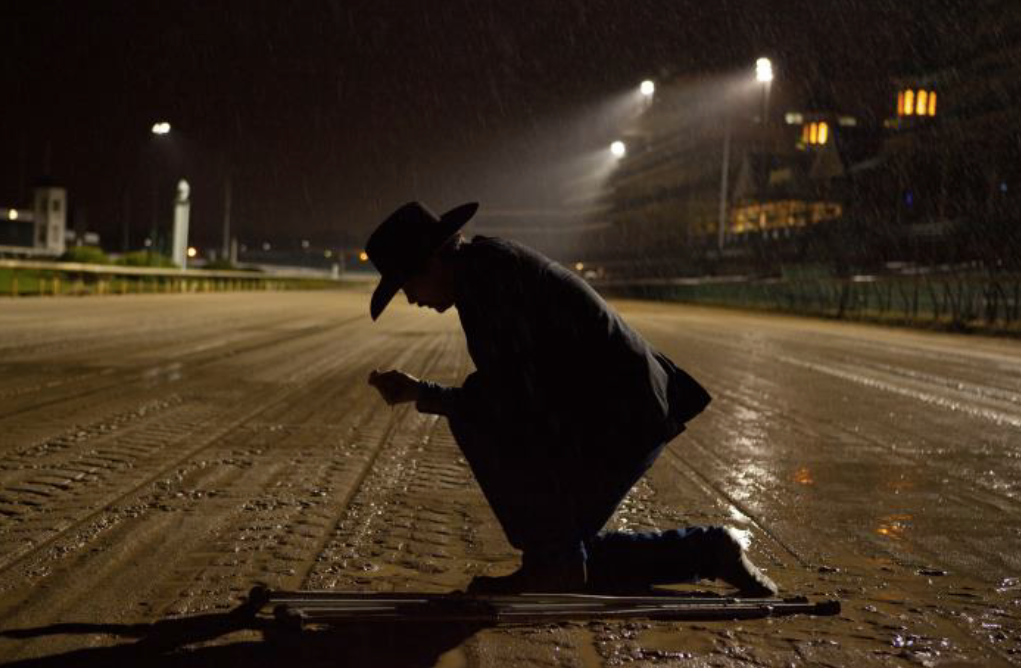 Will Mine That Bird beat the odds and win?  You’ll just have to watch and see! Although this is a true story… so … I mean … yeah, he wins and the reactions caught on screen are amazing. 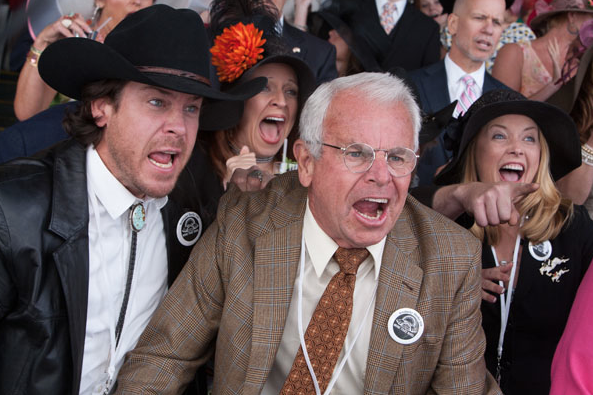 Foregone conclusion aside, you’re going to want to watch this movie for many reasons. First let’s talk “Bird,” played by Sunday Rest. The character’s introduction to Woolley, which I’m going to leave as a surprise, had my whole family laughing in the theater. Sunday is an OTTB and a natural actor, appearing in 50 to 1 just 6 weeks after being scouted while training for chuckwagon races. Sunday Rest is trained by Bill Lawrence and assistant trainer, Lisa Brown. 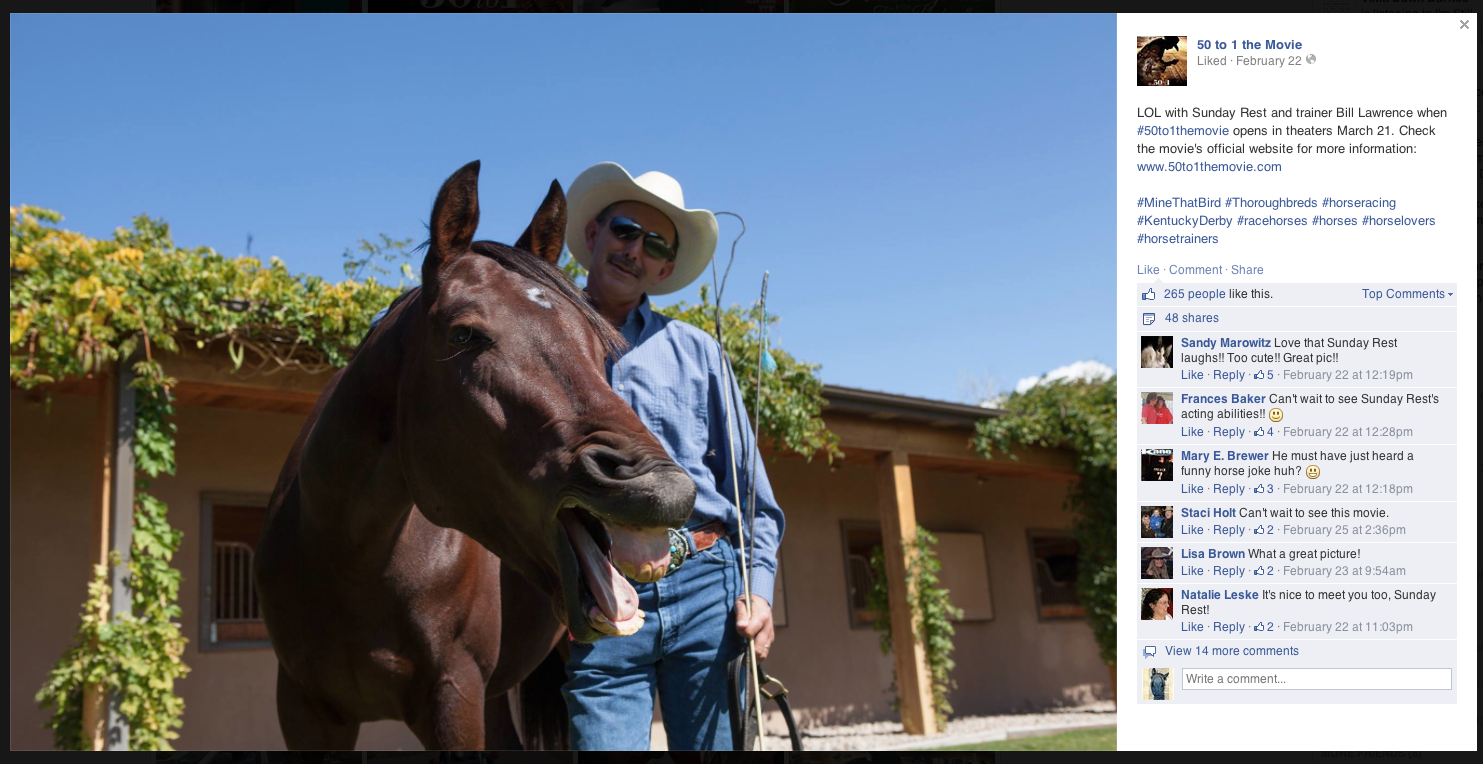 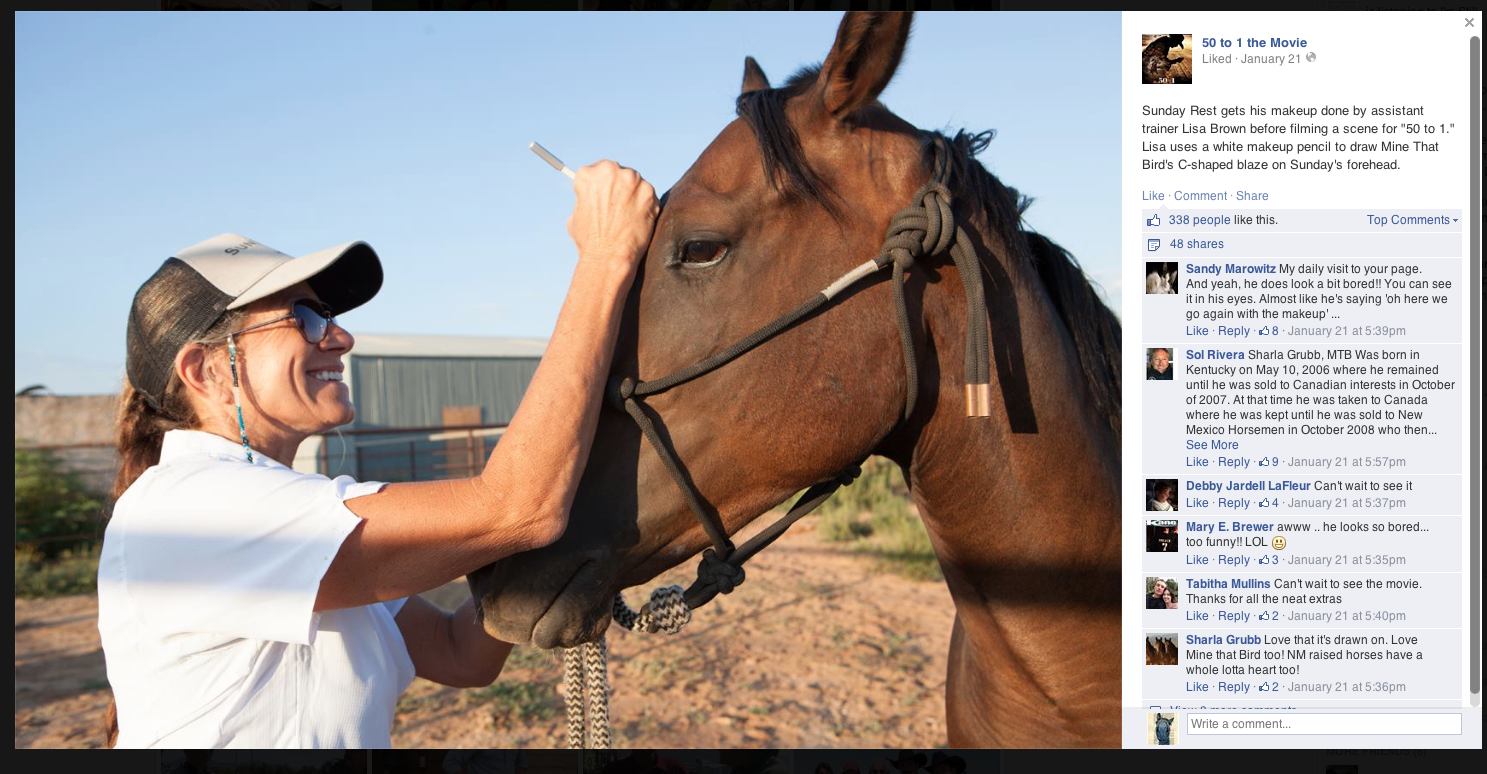 And the other characters were just as entertaining.  From Allen and Doc’s hijinx involved in breaking into the racing office to get their licenses, to Woolley and Alex’s road trip banter…I loved it all! Skeet Ulrich, Christian Kane, William Devane and Madelyn Deutch all were a delight to watch.  Skeet’s portrayal of Woolley’s heartfelt words to “Bird” warmed the cockles of my animal-loving heart. Calvin Borel, who plays himself, was surprisingly fantastic both in his hilarious intro and emotional reliving of the Derby winner’s circle. 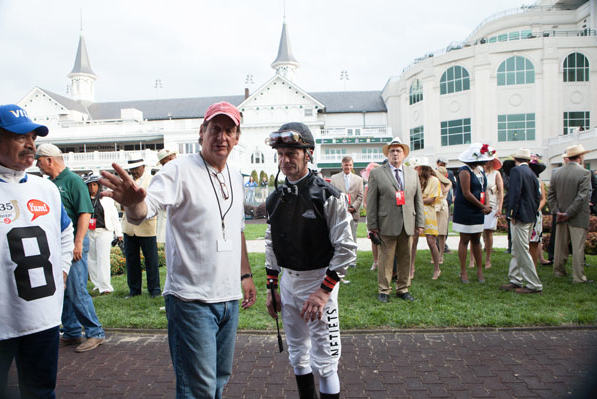 Unfortunately the movie did fall into the pit of despairing cliches on several levels. Down on his luck trainer…check, clueless guy with lots of money…check, offbeat female character to keep everyone on their toes…check, little horse with a heart of gold…check, villainous rich folk to try and beat them all down…double check. Of course some of these cliches were true, but it would have been nice for the filmmakers to tone down the melodrama just a bit and instead use that time to give us a more in-depth look at the racing world and Mine That Bird’s training regimen.

While not having the technical presence of a big-budget horse movie like Secretariat or Seabiscuit, the film still came across as well made. The first race scenes, where the filmmakers switched to actual footage, were a bit jarring but not to the point of ruining the movie. I imagine the method saved loads for their budget and in the end lent an air of authenticity to the whole thing.

This movie is light hearted enough that it will entertain everyone in the family, horse lover or otherwise. It’s rated PG-13, no doubt for the few obscenities spoken and Allen’s raucous good ol’ boy behavior.