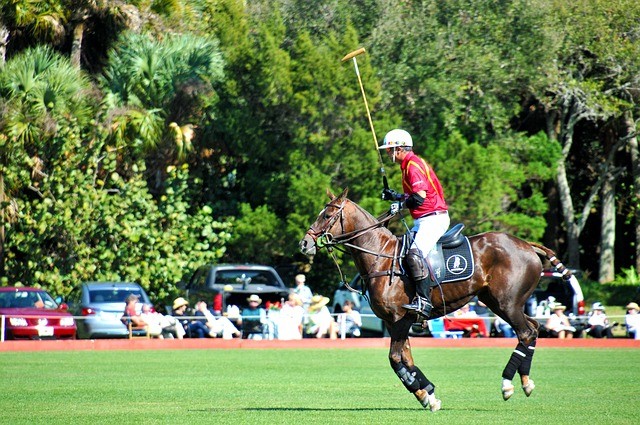 Polo is synonymous with glamorous people sipping champagne while watching teams gallop across a pristine field, but there are several celebrities who preferred their action a little closer.

Born Harry Lillis Crosby in 1903, Bing Crosby was most famous for his roles in White Christmas (1954), Going My Way (1944), Holiday Inn (1942), and Road to Utopia (1945). Off screen, Crosby shared ownership of Binglin Stable, a stock farm in California, and the Caballeriza Binglin Stock Farm in Argentina with brothers Lindsay and Robert Howard, both top ranked polo players. Lindsay and Robert’s father, Charles S. Howard, owned the infamous racehorse Seabiscuit. Crosby was also a founding member of the Del Mar Thoroughbred Club and a member of its Board of Directors. The Binglin Stable partnership came to an abrupt end in 1958, when Crosby liquidated most of his assets to pay taxes on his late wife’s estate. [1]

Clark Gable is an Academy Award winning actor best known for his roles in Gone With The Wind (1939), It Happened One Night (1934), The Misfits (1961), and Mutiny on the Bounty (1935). Born in 1901, Gable learned to ride as a teenager in Ohio. His love for horses continued into his adult life as he frequently visited racetracks, played polo and owned several horses throughout his life. In 1935, he owned Beverly Hills, a Thoroughbred filly that ran at Santa Anita and won her first race at Agua Caliente. Melody, a bay polo pony, was one of Gable’s and his wife Carol’s favorites. Gable also loved hunting via horse or mule, often participating in multiple day camping trips in both Arizona and around the Jackson, Wyoming area. One interesting fact from history is that Gable is credited with bringing the iconic “polo shirt” off the polo field and into mainstream American fashion. [2]

World-famous comedian of the vaudeville stage and of silent films, Will Rogers’ first real job was in the livestock business in Argentina. He transported pack animals across the South Atlantic from Buenos Aires to South Africa for use in the Boer War (1899-1902). Perhaps due to his time in Argentina, Rogers was a lifelong promoter of the sport. He began playing in 1915 during his time acting in the Ziegfield Follies.

Rogers first learned to ride in Oklahoma as a boy on his family’s land.  He eventually played polo in Argentina, England, the Philippines and India. In 1926, he purchased land in the Palisades, California where he built a home and polo field.  In an interview with Movie Morlocks, Robert Stack described Rogers. “He used to tear down the field twirling the polo mallet around his head like a cowboy about to rope a steer.”  Today, Rogers’s polo field is now publicly owned. Los Angeles matches are still held there regularly. [3]

Born in 1901, Spencer Tracy is a two-time Academy Award winner best known for his roles in Judgement at Nuremberg (1961), Guess Who’s Coming To Dinner (1967), It’s a Mad, Mad, Mad, Mad World (1963), and Inherit The Wind (1960). At the encouragement of director John Cromwell, Tracy took up the sport of polo, training under the legendary Leslie “Snowy” Baker at the Riviera Polo Club in Santa Monica, where the actor leased lesson horses. Rising at 6:30 a.m. every morning for a stick-and-ball session, a type of practice where a rider performs basic drills or practice shots unopposed, Tracy played daily before he went to the studio. Tracy’s wife, Louise, also took up the sport that was then viewed as too rough for women. With Spencer’s support, Louise went on to be a polo legend in her own right when she helped to create some of the first all-women’s teams. [4]  In a 1938 celebrity polo match, Spencer Tracy played on the team sponsored by Joan Crawford. The actor once said, “There’s something about horses which, once you really become interested in them, just naturally makes you think this is a pretty good world.” [5] [6]

Walt Disney picked up the sport in 1933 at the urging of Will Rogers, who often called him ‘Mickey’ on the field. He built a hitting cage at the Disney studios and had a dummy horse at his home to practice in between riding sessions in the San Fernando Valley, where he frequently played at the Riviera Polo Club. He also became a rampant supporter of other polo players, even helping to pay for their polo ponies.  Walt’s love for the sport eventually bled into his creative life, resulting in the 1935 cartoon “Mickey’s Polo Team.” After witnessing the death of two players and sustaining many injuries, one to his neck which would bother him for the rest of his life, Walt Disney sold his ponies and gave up the game. [3]

Crawford’s participation in the sport of polo was limited to recreation and sponsorship from the sidelines. The actress, along with many others such as Ginger Rogers, used the game as a catalyst to show off their latest fashions. Crawford sponsored many teams during the “Hollywood Polo” heyday of the 1930’s and 1940’s, with fellow actor Spencer Tracy riding on her celebrity team in 1938. [3]

The young princes of England were raised around horses with their Grandmother, Queen Elizabeth II, being an avid equestrian and promoter of the Thoroughbred breed. She is a patron of the Thoroughbred Breeders’ Association. [10] Prince Charles, Harry and William’s father, all play polo, regularly participating in charity matches. Harry’s polo, however, when paired with his “wild” lifestyle is not without controversy. After he fell twice during a match in South Africa, animal rights activists cried foul. [11] That wasn’t the first animal cruelty claim made against the prince. In 2010, activists accused Harry of being “heartless” when one of his ponies was photographed with a bloody wound on its flank most likely caused by a spur. Earlier that same year, a ten-year-old mare named Drizzle, collapsed and died of a heart attack shortly after playing in a match. [12]

The British actor famous for Pygmalion (1938) and Gone With The Wind (1939) is widely considered one of Hollywood polo’s best player/actors. Claiming that he was not a good player himself, Howard believed that his real advantages were his decent polo ponies and his awareness that “the game should be played just for fun.” Still, the actor was highly critical of amatuer enthusiasts in Hollywood. He often called his fellow Hollywood riders, “the worst and [yet] the most serious polo-players in the world, riding the worst polo ponies” declaring that “[h]ere in Hollywood a man who has never seen a horse before suddenly decides to be a polo player. He equips himself with some mallets and balls, rents or buys a horse, usually one that should be pulling a milk truck, and then proceeds to play the game as though his life depended on it. Under these conditions, injuries are inevitable.” [3] Howard played internationally, often shipping his polo ponies from California to matches worldwide. [13]

The Texas-born Academy Award winner, known for his roles in No Country For Old Men (2007) and the Men In Black franchise, has played polo for over two decades. He funds teams in Florida, Texas and Argentina, where he owns a sprawling 74-acre equestrian facility. “Polo brings out some really raw, inspirational emotions,” he told Polo+10 Magazine. “And as a team, we are at the top of our game. We can beat anybody, anytime, anywhere. And we love the thrill of proving it!” His daughter, Dawn, picked up the mallet when she was just six years old and now plays the sport at a competitive level. Actor Jones prefers the quieter polo life, riding privately on his San Saba Texas ranch where spectators are not allowed. He says, “My goal is simply to carry on enjoying the sport. It’s the competition, the people and the experiences, and once you’ve discovered that world, it’s difficult to let it go.” [9]

In Italian, the name Stallone roughly translates to “stallion,” the actor told Polo+10 Magazine. The actor and writer, iconically known for his role in Rocky (1976) as the “Itallian Stallion,” has a rich family history with horses. Stallone’s father, Frank Stallone, was a professional polo player in Italy before he immigrated to the United States in the 1940’s. Frank continued to play polo through the 1950’s at the Potomac Polo Club, where Sylvester first picked up a mallet at the age of eleven years old. The game would serve as a common bond between the actor and his father with whom he held a tenuous relationship. They played a match in 1990 at the Palm Beach Polo Club in Florida. Stallone has since moved away from polo, taking up reining after his daughters showed interest in the western discipline. [7] [8]

This horse should be named people magazines “sexiest horse alive” for 2015.

View from the desk

[2] Clark Gable, in Pictures: Candid Images of the Actor’s Life

[5] Out of the Past: Stars and Their Hobbies

[13] The Life Story of Leslie Howard