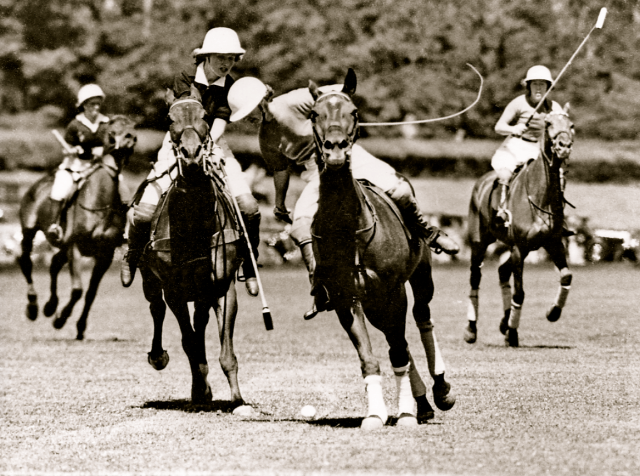 The Sport of Kings has always been played by ladies and now we have the pictures — and an upcoming book — to prove it.

Colleen Meagher is an 89 year old former polo player with over 100 photos full of history and drama.  She recently pulled those images together, along with a ton of historical information and anecdotal stories, to create Comin’ Thru: The Golden Age of Women’s Polo.  The book is yet to be published, but here’s a quick peak inside.

Louise is considered the “Mother of Women’s Polo.” Louise began riding lessons in Aiken, South Carolina. She soon tired of the precarious balance of riding sidesaddle and broke with the tradition by riding astride. Louise soon learned to play polo, and in 1901 she played the first recorded game with women players in the United States. The teams were mixed men and women and Louise captained the team. In 1909 at the Meadow Brook Club on Long Island, the first all women’s team played a men’s team. An expert polo player and teacher she became the coach for her son, Tommy Hitchcock, who became a ten‐goal player, Captain of the United States Polo team and considered the finest polo player in the world. Louise also founded the Aiken Preparatory School in 1916 where she coached both boys and girls the game of polo. She noticed the young girls and boys could compete with each other, as their abilities were similar. In the early 1930s Louise was organizing a women’s team in the East to compete with a newly formed women’s team in the West, captained by her friend, Dorothy Wheeler of California.

While Dorothy Wheeler had been unsuccessful to set up East/West matches for the women’s association, Louise Tracy set up exhibition matches in Arizona and Texas. Louise’s plan was simpler and cheaper because unlike Dorothy’s plan she did not intend to bring horses on the trip. The nine women that took part agreed to ride whatever mounts were provided and promised not to hold anyone responsible for any accident that might happen. Well, the women simply ‘Wowed” the Southwest! They did better in some games than others but people were overwhelmed at how good they were. In one of their games they played on a lighted football field at night and they were amazed at all the crowds and publicity they received. The men were especially gracious to them, not only by loaning them their horses, but also in their welcoming attitude. All in all when they returned home they proclaimed their trip a great success and in the articles written by Louise Tracy for magazines and local newspapers she proclaimed that at last this is the moment in the history of women’s polo when the old movie title might be used appropriately: Came The Dawn.

In October 3, 1937 the women’s polo invaded the Golden Gate polo field in San Francisco. It was the first Open Tournament to be played by women. Unlike the Association tournaments, the women did not have to be team members, but could mix up and form teams of any combination. They received a great deal of press from the San Francisco newspapers, as many people had not witnessed this kind of horse showmanship from the ladies. One local paper wrote: “Arriving tomorrow with the Riviera women’s polo club, which plays Mrs. Deming Wheeler’s Pogonip club Sunday at the Park Bowl, will be Dorothy Rodgers and Audrey Scott, respective six goal players.” This pair rides so well that Hollywood motion picture producers call on them to take part in the horse riding sequences of pictures being made by famous actress. Both Miss Rodgers and Miss Scott enjoy the dangers of hard riding, and frequently double for movie actresses.” Pogonip lost to the Riviera team by the uneven score of 9 to 1. The finals between Riviera and Santa Barbara were played on October 10th. Again the Riviera team was successful in winning by a score of 9 to 4,thus winning the first United States Open Championship in which women were allowed to compete. Again the women headed to the Del Monte Polo field in Pebble Beach to play the Governor’s trophy on October 15, 16, and 17. Once again the women could pick their own teams. On the final day of the tournament finals, it was the Pasatiempo team that was victorious.

With the beginning of World War II on December 7, 1941, the women’s polo association immediately became involved in the war effort. Dorothy Wheeler traveled to Washington, D.C. where she offered the services of the USWPA and, consequently, the women formed the United States Mounted Corp and became a wing of the Red Cross Motor Corp. Upon her return to Santa Cruz, Dorothy wrote the manual for the Mounted Corps: “The United States Women’s Polo Association Manuel of Field Training Maneuvers.” The training included recognition of military insignia, learning to read maps, find fire trails and read a compass. And all members were required to have standard and advanced first‐aid. Since their goal was to rescue any of the pilots that might be shot down by the enemy, they adapted the Stokes stretcher to a horse.

As you can see, the book is packed with interesting factoids and first-hand stories. If you’d like a copy, head over to MT Publishing to reserve yours today!