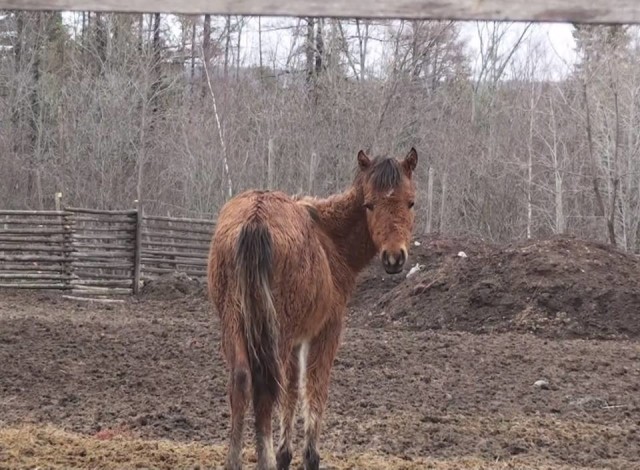 Emails within the Aroostook County Sheriff’s Office have been released as public record, indicating attempts to cover up the animal mistreatment complaints about Jessica York’s apparent horse neglect.

Some readers may be familiar with the story of the Houlton horses, a mixed herd of at least 50 animals including Norwegian Fjords and rare and endangered Caspian ponies. Concerned citizens have been reporting a lack of shelter, food and water to law enforcement since at least 2012 but law enforcement has not taken any action against the horses’ owner, Jessica York.

Recently, concerns over the horses’ welfare rose to a fever pitch after York’s herd made headlines in February of 2015, escaping their pasture to casually trot through the town of Houlton and back again. York is quoted as saying “The Norwegians [Fjords] tend to get obese if you give them a round bale of hay, and they have no way to work it off. I was trying to let them go five or six hours without their heads stuck in a bale.” (Check out a brief video of the escape and the full article here.)

In March of 2015, sheriff’s deputy Chris Johansen started investigating the alleged horse abuse on his own time with full permission of his supervisor. He found malnourished and underweight horses with frozen water tubs and no shelter, despite cold and snowy conditions; some of the horses were in a small enclosure not even owned by York. After his visit, York filed police reports that Johansen had trespassed; she later filed a report that Johansen had stolen all of her horses (they were discovered to be behind a hill where she could not see them).

Johansen was told to either resign or be fired in May of 2015; he resigned. (See our coverage from July of 2015 to read Johansen’s report as well as his letter of resignation.) When he went public with this latest development, equine welfare advocates including the Maine Equine group began to take a more active role in documenting the horses’ conditions and reporting to law enforcement. In January of 2016, a horse escaped York’s property, ran onto a highway and was struck by a car and killed (the driver was nearly killed in the crash).

Records show that concerned citizens’ calls and emails numbered in the hundreds; most of these complaints went unanswered. Sheriff Crandall’s email records show that he rarely replied to emails but did occasionally forward them to friends with additional captions of “LOL!” or “Another love letter!” In an email to Houlton police chief Joe McKenna, Crandall states that he will get him Chrissy Perry’s number, the state welfare agent, in hopes that “she can slow this down.”

The controversy grew to such levels that Senator Peter Edgecomb launched an investigation — into the coverup, not the horses themselves. Senator Michael Willette contacted Sheriff Crandall after protestors rallied at the Maine State House, with Willette stating that he and Crandall needed to speak about the horses. Records show that other state officials including the State’s Commissioner are starting to get involved.

These records were requested in August of 2015 by the Global Conservation Group and finally released over 200 days later. While the Global Conservation Group and Maine Equine are counting this long-awaited compliance as a victory, the fact remains that this is just one small step into uncovering the alleged cover-up of animal abuse, which itself is just a step towards getting the starving horses of Houlton rescued and into good hands.

We’ll continue to cover this abuse case, with hopes of having good news to share.