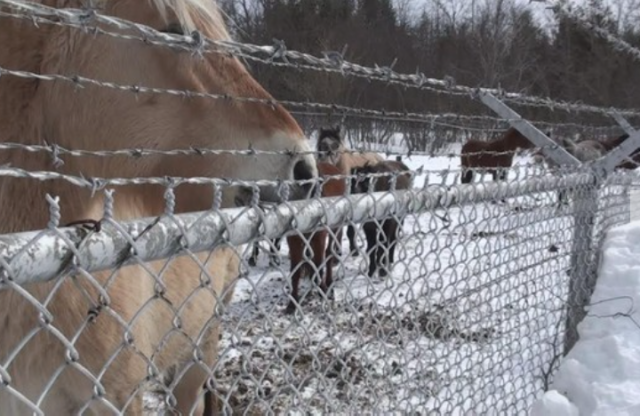 A small town in Maine has garnered worldwide attention after accusations of horse abuse and police scandal hit social media.

The Maine Equine Facebook, with just over 2,900 ‘Likes,’ has sparked controversy after posting pictures of an alleged horse abuse case. There are an estimated 50 Caspian Horses – an endangered breed – and possibly 26 Fjords on the property. Here are a few of the most recent posts:

The organization’s website gives more details. It appears that the complaints began in 2009, when the Houlton farm owner was issued a warning by the state. The owner complied with authorities and little was heard about the farm until 2012 when the Animal Welfare Department again opened the case. The phone complaints started in earnest six months ago after the horses escaped their pasture.

Bangor Daily News reported owner Jessica York saying, “It was actually quite out of character for them. With this breed, even if they do get out it’s just to get to the next hay bale to eat, which is why we have them.”

It was discovered that the property was owned by Loring Development Authority (LDA).  LDA took over properties owned and operated by Loring Air Force Base located in Limestone, Maine.  Over the years, LDA has been monitoring this property due to contamination by fuel that was carried to the Air Force Base via a pipe line. Concerned citizens began “checking” on the horses on a regular basis.

There have been complaints of lack of feed, lack of water, lack of shelter, uncontrolled breeding and lack of fence security. Complaints have been made to the state’s Department of Agriculture, Attorney General’s Office, Department of Justice, and the state-wide Animal Welfare Agency. A Sheriff’s deputy, Chris Johansen, began investigating the case on his own time with the permission of his supervising officer. He concluded, “Most of these horses were lean with hips and ribs showing. About twenty were in a severe malnourished condition.” The report went on to state that the horses “appeared sick and several are unable to stand on their feet for very long.”

In May 2015, Johansen was given an ultimatum: resign or be fired. He chose to resign.  In his letter he stated, “If I were to back away from this issue just to keep my job, I would be bowing to the same pressure as you.”

Johansen has since started a petition in which he claims authorities refuse to step in because “the family that owns the horses are wealthy, powerful and prominent members of the community.”

As of June 20, 2015, Maine Equine reports the farm is again in non-compliance with state laws due to a lack of shelter.

In an interview with WGME CBS 13, farm owner Jessica York said, “I’ve been working with the department of animal welfare since the beginning of the harassment; they have a huge file of everything. I’ve been open with my veterinary documents, they have access to those.”

In the same interview, the local police chief questioned whether the Maine Equine Facebook photos were authentic. York’s own Dowry Farm/Aroostook Caspian Stud Facebook details a clinic that was held in 2014, though there have been no updates in the past year.

What do you think Horse Nation?

A previous version of this article stated the property was an “8+ acre property.” Conflicting information claims the property is in fact much smaller.