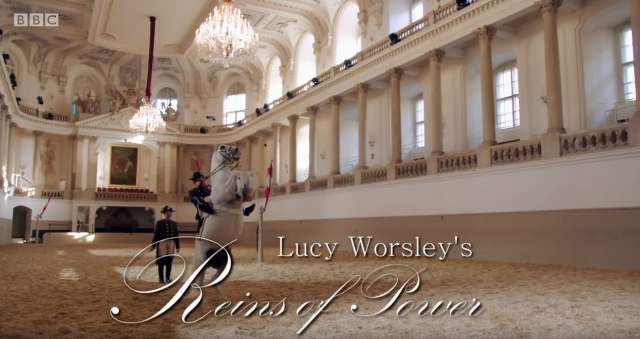 This week, we watch a BBC TV personality “learn to dance on horseback” — or at least make a truly valiant attempt.

Worsley is currently Joint Chief Curator at Historic Royal Palaces, but also presents BBC television series on historical topics. Although not an equestrian, her interest in manège, the French word for a riding academy, began when she spent four years writing a PhD thesis on the subject of “the royal art of making horses dance.” The tone of this documentary follows that theme, with a strong emphasis on horse riding’s effect on historical figures rather than horses themselves.

We first travel to the stables of William Cavendish, 1st Duke of Newcastle upon Tyne. She describes training methods and tours the facilities, while consulting several experts on Cavendish.

At this point, we are whisked to a local stable where the host’s personal training begins with Ben Atkinson, whom I was kind of #fangirling by the end of the documentary.

It became pretty clear early on in the film that Ben had no idea what he signed up for. During his first lesson with Worsley he adamantly tries to teach her, “heels down,” “elbows in,” and “keep your hands steady and even.” But by the end of the day he simply says, “Just don’t do anything I don’t tell you to do.” The result is that the next few sessions involve Worsley simply sitting atop her mount, Alonso, while Ben directs the horse from the ground, which was actually much more interesting to watch.

Next, we head to a Norman castle where Worsley looks into the history of jousting. She leads us through a tour of artifacts and paintings, revealing why jousting tournaments were so important for international relations and why the sport declined a century later. Worsley is then strapped into her own suit of armor. Her comments, “Oh, yes! I am Robocop!”

Back at Ben’s, we witness the more complex movements in the manège. As he demonstrates, Ben describes how each movement would be used in a military situation.

Next, we hear a history lesson on Charles I — who we can all blame for giving equestrian sports a “silver spoon” stereotype — and Charles II that preferred racing. Worsley also visits a national Dressage champion, the barracks of the Royal Horse Artillery and the Spanish Riding School in Vienna.

The documentary concludes with Worsley performing at the historic Cavendish stables in full costume.

I really enjoyed this documentary filled with historical factoids, baroque horses and beautiful locations. Did it show training methods in detail? No. Do I think Worsley worthy of the title “equestrian” by the end? Absolutely not. Still, I admire her sense of humor and her willingness to give riding a go. Technically, the film flows nicely, is well edited and the video quality on Youtube is excellent.

I give Reins of Power, 3 Golden Horseshoes.