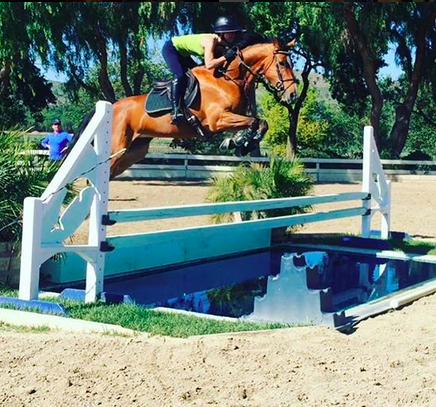 What’s our favorite celebrity equestrian been up to?

It’s no secret that we love Kaley Cuoco here at Horse Nation: we’ve long admired her killer equitation, her sense of humor (because she understands like all of us that horses keep you humble) and her obvious appreciation for the hours of hard work it takes to be successful in this sport. And our favorite celebrity equestrian has been crushing it recently: winning classes, welcoming not one but two new horses to her herd, and starting a new romance with West Coast-based Grand Prix rider Karl Cook.

Any time we share news about a celeb-equestrian, there are inevitably a few people who ask “why? Why should we care what some famous person does with her horses and her boyfriend?” To which we reply: in a world where the general public is typically pretty confused about what it is that we actually do, we need all the good press we can get — Kaley Cuoco isn’t just a famous woman who likes to ride, she’s an ambassador for our entire sport.

Welcome to the family, gorgeous miss Bella. ??? I am already in ?with you!

And then in a sharp break with that color scheme, Kaley just yesterday posted this drop-dead-beautiful gray gelding that has also joined her string:

This really messes with my streak of bay horses but I think I’ll keep him ?? welcome to the squad #PokerFace ? ??#badass #ithinkimdreaming A photo posted by @normancook on Apr 14, 2016 at 6:18pm PDT

These new additions come right on the heels of Kaley’s announcement that her beloved horse Santos was retiring from competition, coming home to be her pleasure riding horse.

Dear Santos, thank you for being my first real horse. I bought you 8 years ago as my modified jumper and you turned into my first 1.30 jumper- you are the reason Iam so in love with this sport- thank you for kicking out every time u rub a rail -and almost bucking me off in every single lesson . You make me laugh harder than any horse I will ever have. I now want you to enjoy being home, trail riding, biting me, tons of endless treats and being an all around pleasure horse. ?? you are what dreams are made of!! Thank you!

A horse girl after our own hearts! Gotta love and respect that. Meanwhile, Kaley and Bionetty, aka “Nettypie” have been casually nailing the big-time, from picture-perfect schools over the water…

… to conquering the aptly-named Devil’s Dike in the show ring:

My little speed demon princess unicorn helping me through the devils dike tonight in the 1.30 derby class! ????? #nettypie

Oh, and then there’s this whole boyfriend thing: Cuoco went public in mid-March with her relationship with this guy, Karl Cook:

If you’re more of an avid show jumping fanatic than a Big Bang Theory fan (or celebrity stalker, like us) then you know all about Karl Cook, the show jumping wunderkind who had a young rider curriculum vitae that was the stuff dreams are made of: helping his team win gold (twice!) at the FEI North American Junior and Young Rider Championships (NAJYRC) as well as winning the individual gold in 2007.

Then Cook made headlines in a different way — after his performances took a decided downturn in 2012, he went back to the drawing board and switched trainers, rebuilding basically everything he knew about his training program and riding style. He got more involved with the daily care of his horses and soon returned to his winning ways with marked success at this year’s HITS Desert Circuit.