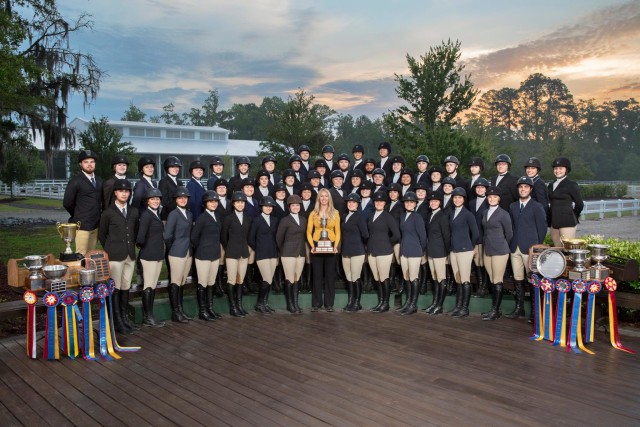 The 44th Intercollegiate Horse Shows Association National Championships will take place in May at the Kentucky Horse Park: hunt seat and western championship teams have been named!

Fairfield, CT (April 11, 2016) – Defending Intercollegiate Horse Shows Association (IHSA) national Collegiate Cup hunt seat champions, the SCAD (Savannah College of Art & Design) Bees coached by Ashley Henry, and “hometown” contenders, the University of Kentucky Wildcats, coached by Diana Conlon, are among the 25 hunt seat and western riding teams that, at the conclusion of the collegiate equestrian equivalent of March Madness, have qualified for the 44th IHSA National Championships, May 5-8, in the Alltech Arena at Lexington’s Kentucky Horse Park. Joining them are more than 400 top-ranked IHSA riders who will also be competing for individual national titles at the oldest, largest and most prestigious competition of its kind for college riders in North America.

In 1967 IHSA was created so that students of any race, gender, economic background or skill level could participate and ride for their school in collegiate competition. In 2017, IHSA will celebrate the 50th Golden Anniversary of its founding by 18 year-old Fairleigh-Dickinson University sophomore Business major, Robert E. ‘Bob’ Cacchione, who continues to lead as executive director and in 2011 was recognized with the Zoetis Equine Industry Vision Award for his dedication to generations of riders and the sport.

Go to www.ihsainc.com for complete results and coverage of the IHSA National Championships, including a link to a live stream feed provided by EQSportsNet and follow the Intercollegiate Horse Shows Association on its official Facebook and Instagram pages (#rideihsa).