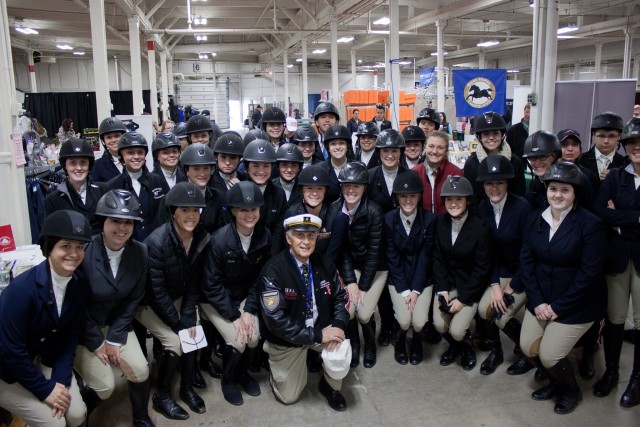 One horse-deprived college freshman named Bob Cacchione came up with a creative way to keep horses in his academic life in 1967 — and created the Intercollegiate Horse Shows Association, now 10,000 riders strong.

Bob with hunt seat horse draw riders at 2015 Nationals, which carried a nautical theme. Bob donned a captain’s hat to be ‘at the helm’ of the IHSA. Photo by IHSA photo intern, Maureen Michelson (UCSC).

The Intercollegiate Horse Shows Association serves 10,000 college riders annually, providing a venue for lifelong equestrians to continue competing as well as a place for new riders to learn the ropes. Competitors don’t need their own horses to show; each rider shows with a randomly-selected mount provided by the host school. Unique in that it draws both veteran show-ring equestrians, more casual riders and those who have never ridden at all, the IHSA is helping to shape the next generation of professional horsemen and horsewomen through collegiate competition.

Bob Cacchione, the founder and executive director of the IHSA, has devoted his life to developing the association from a grassroots lesson program that he coached as a freshman to a ten-thousand-rider-strong prestigious season of competition, culminating in a four-day national championship. The IHSA has transformed from a mere opportunity for college students to show into a major facet of the horse industry, developing collegiate riders as they continue their education.

Within the IHSA, everyone seems to be on a first-name basis with Bob — because he takes the time to speak with individual students, asking them about their competitive season, their college studies, where they’re from. He mingles with spectators and families in the stands at major shows. He’s been known to hang out and eat pizza with teams the night before their competitions. This kind of one-on-one relationship that Bob loves to foster carries over to the IHSA’s sponsor partnerships and the association’s relationship with other governing bodies in equestrian sport. Few executive directors work so hard to treat everyone as an individual.

We caught up with Bob to talk about the IHSA’s creation and development, as well as what’s next for the association.

Bob giving a Fairleigh Dickinson University student a leg up (circa 1968). Photo courtesy of IHSA/Bob Cacchione.

Tell us about the creation of the IHSA.

I was seventeen years old and a freshman in college — I was attending Fairleigh Dickinson University in New Jersey. In my family, I had an older brother, then me, then a younger brother, and then a sister, all attending college within six years of each other. My dad said “Look, we can’t afford to be paying for four colleges and your horseback riding, so you’re going to have to make a choice.”

I said, “Okay, horseback riding.” That was not the right answer, so I had to stop riding to go to school. At Fairleigh Dickinson, I found five other riders, plus myself, and we formed a club. There was a park nearby that rented horses to ride on the trails, so we rented horses for an hour and I got to ride for free as the coach. Word spread, and overnight I suddenly had forty riders who heard that there were lessons available.

The school caught on to what we were doing and told me that they wanted to offer it as a one-credit PE class the next year, and they wanted me to teach it. So there I was at age eighteen, the youngest-ever faculty at the school, teaching riding. Then the school said “Okay, we want to see what you’re doing” and they gave me $200 to put on a horse show.

One of the professors from the Madison campus [of Fairleigh Dickinson], he was the Dean of History, and his name was Jack Fritz: he was a big-time horse person. He was the secretary of the USET, he was involved with dressage and the Pony Club. I called him up and invited him to bring some riders to the horse show, but not to bring any horses — that was the whole point, they would ride horses that we drew out of a hat to make it fair for everyone. We had three levels: beginner, intermediate and advanced.

After the show, I put a four-inch ad in the Chronicle about this idea of collegiate horse shows, and I got six colleges interested right away for a spring show. And that was the start of the IHSA!

How far did you realistically see it going when you started? It just sort of happened, didn’t it? You didn’t necessarily sit down and decide to start the IHSA.

It just kept growing and growing! I didn’t expect it. But why not? Colleges have football, basketball, other sports — why not horseback riding? The schools don’t need to own a brick-and-mortar barn; they can work with local barns and still be very successful.

There are now fifty equestrian studies programs across the country: Otterbein, for example, just built a brand-new facility. Findlay has a whole campus just for its western program, and another campus a few miles away for the hunt seat. Stanford always had a barn but the whole equestrian property got remodeled and now there are two barns and a covered arena. Cazenovia always has 125 students in a four-year equestrian program — the program is full every year. There are so many more but those are just examples.

The backbone of the IHSA has always been, from the beginning, the professionals in the horse industry that are in it. We always used USEF judges. The people are key: there are professionals involved now in these college programs who are big names in the industry, coming on to teach these college students. And our graduates are going on to great high-level equestrian jobs too. Just look at the Cacchione Cup [the individual IHSA championship for the top level of hunt seat riders]: Beezie Patton, now Madden, Peter Wylde, Greg Best — and we’re still going forward.

And we have levels for all riders: in the hunt seat, we have Medal Maclay riders in the Open all the way down to walk-trot-canter and walk-trot for the beginners. The IHSA opens the door for college riders who maybe just rode a little bit at a camp once, or took lessons as a kid, and never got the chance to ride again. We can develop riders who have the desire and the passion, because of course you don’t need your own horse to do this.

When you see how much the IHSA has grown, how does that make you feel?

I’m ecstatic. On the first day of the National Championships, I’ll walk into the arena and just look up at all of the teams in the stands and go “Oh, my God.”

We used to have the Nationals at college facilities, but we’ve grown so big that we’ve started hosting the Nationals at major venues: Harrisburg, the Kentucky Horse Park, the Los Angeles Horse Park — we’ve been there twice. It’s a great opportunity for students to ride at these larger venues and be aware of what’s out there for competition. Many of them have never gotten to ride in a venue like that, and they may not ever again.

The team camaraderie is always great to see: the Open riders, the Medal Maclay riders, they’ll show in the morning, and then by the afternoon their jackets are off, their sleeves are rolled up and they’re helping their Novice and Beginner teammates get ready to show. It’s gratifying to see. These beginner and intermediate riders might never have a horse in their lives without the IHSA. And exposing these riders to horses benefits the entire horse industry, bringing in people who might never have experienced horses before.

What is the most gratifying aspect of your job, if you could narrow it down to one moment or one experience?

I’ll answer that with a story. Two or three years ago, there were four of us from the IHSA attending the USHJA [United States Hunter Jumper Association] convention: Lori Cramer, Naomi Blumenthal, Peter Cashman and myself. I had been asked to give a speech over a luncheon to all 400-plus attendees. The night before, they surprise me at the banquet with the President’s Distinguished Service Award, which included a lead crystal vase; I wound up basically having to give my same speech twice!

So when we’re flying back home, the other three of them — Lori, Naomi and Peter — have gone ahead of me through airport security, and I’ve got this lead crystal vase all wrapped up in my carry bag, not my check bag. And when it goes through the X-ray, it sets off all of these alarms. So I get pulled aside and patted down, and then they unwrap the vase and see my name. And one of the TSA agents says “You’re Bob Cacchione?” I said yes. She says “No way! I rode in the IHSA in college! Let him go through, he’s fine, he’s a great guy.”

It’s a sign of just how many people have ridden in the IHSA and gone through the programs. I get recognized all over the country and so many people rode in the IHSA in college.

I live in Connecticut, so every weekend I’m driving to shows. I’ll drive to shows within a five- or six-hour radius; beyond that I’ll fly. So on a Friday night, I’ll drive to a show, hang out with the host team, have dinner with them, then stay to support them at their show on a Saturday. Then I’ll drive Saturday afternoon to another show, visit that team, and support them on a Sunday. If I’m flying, I usually only get to visit one show in a weekend.

I always visit the previous year’s national champions, the Collegiate Cup winners in the hunt seat and the AQHA High Point Team in the western. And the Cacchione Cup winner, and the High Point western rider. Then I’ll try to visit the regions I may not have been able to see the previous year. Within New England, New Jersey, New York, Pennsylvania, Virgina, I can usually drive to two shows in one weekend.

I’ll visit 18 to 20 shows in a school year until about mid-March; then the Regional Championships start taking place so I can’t get to all of them. The western Semi-finals take place all over the country on the same weekend, so I split those up with members of the Board of Directors and we attend all three. The hunt seat Zone shows are similar, all on the same weekend; I’ve traveled as far as Colorado for those. I think it’s very important to have members of the Board at all of the major shows.

Bob in his IHSA jacket at Nationals. Photo courtesy of Al Cook.

Do you still get to ride?

Oh yes — I don’t show any more, but I still fox hunt. I’ve ridden a lot with the Essex Hounds. I do get to ride at the various schools when I visit too. We always go for a ride at Stanford after the Sunday show every time I visit. I’ve ridden the military mules at West Point; I rode a reiner with Ollie Griffith at Ohio State. That first sliding stop — I was hooked!

And one last question: what’s next for the IHSA?

Another 50 years! The 50th anniversary will be celebrated in 2017. The reins will change in the next 50 years — as they should. I have incredible people on the Board of Directors who understand the scope and the vision of the program, with great expertise and professionalism. There’s no question, no doubt, that the next 50 years will be incredible for the IHSA with its strong, solid foundation.

Our thanks to Bob Cacchione of the IHSA for his time! If you’d like to learn more about the IHSA and riding in college, please see the IHSA website for more information. Go riding!