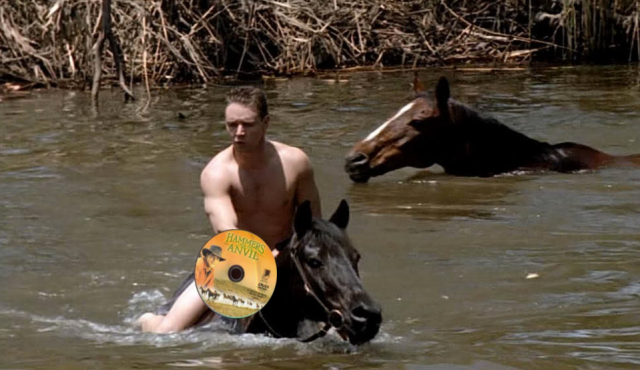 Penned as a prequel to the classic tale, Crowe plays Robin Longstride a 12th century mercenary. While the movie directed by Ridley Scott had its problems, the cinematography is gorgeous and the horse scenes are remarkably well done. On the fan site Murphsplace, Crowe described some of the on set equine action sequences–

I have a string of 4 Andalusian horses that make up my character horse. My main horse is called “Rusty” so we share a name. He is an extremely intelligent and capable horse and I will probably use him for everything as he is powerful and fast as well as smart. I have one horse called Sebastian who is incredible at rearing and dancing so we will probably work specific moments into battle stunts for him. About 2 seconds after that gap in the buildings that the paps have shot through we, [Rusty and I] launch into a full gallop and slay 5 attackers including one bit where I lean off the right hand side at full stretch to avoid a pike, after the 5th is dispatched I ride him bang into another pikeman who just misses my head, there are two other sections of battle choreography that follow on from that. We have one left to shoot starting Monday. Rusty is so quick that I have to be right on my game to get the choreography accurate for the cameras. Sharp eyed observers might be able to see that the stirrups are joined together under the horse in section 1 so I can really throw myself into the lean to avoid the pike. It’s a little dangerous because it limits my control of the horse, I become the performing monkey on his back. He has been great though, so up for it and tuned in. He spins on a dime and responds like a cutting horse. He knows all the words like rolling, sound speed and definitely action, I can feel him revving up beneath me, he’s so much fun, he gets right on his toes and turns out like a cat. Can you tell I’m loving this guy?

This western pits Crowe, playing a captured outlaw, against Christian Bale portraying a small-time farmer charged with transporting Crowe to a train bound for prison. It’s a well done remake of the 1957 film of the same name with an 89% “Fresh” rating on Rotten Tomatoes. Crowe told MTV he loved the idea of filming a classic western–

When I read this I said, “I’d enjoy doing this, I’d enjoy being around horses, and I’d enjoy this character, so that’s what I’ll go and do.

Arguably Crowe’s most “horsey” role, The Silver Brumby is an adaptation of the book series of the same name written by Elyne Mitchell. The story is a strange blend of Black Beauty and The Man From Snowy River with the horse itself playing the protagonist while Crowe is the antagonistic villian. Like all of Crowe’s onscreen riding, the horse chase sequences filmed in the Australian outback are very fun to watch. You can read my full review here.

Honorable Mention: Hammers Over The Anvil (1993)

I want to give a special shout out to this little known film, because it actually features Crowe in his birthday suit. Yep. Russell Crowe naked on a horse. That is all.