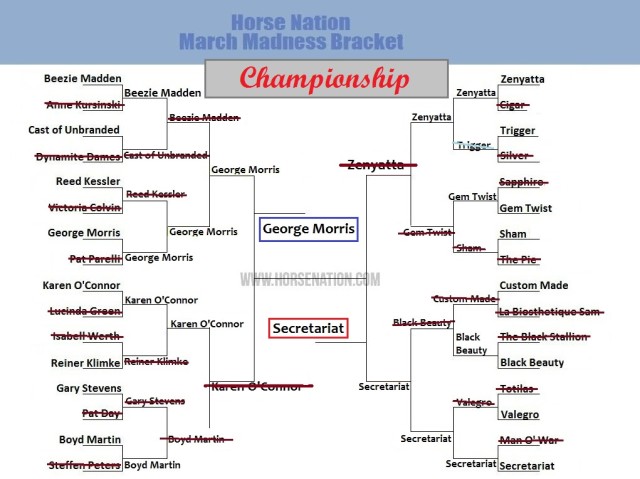 The past couple rounds have had some close matchups, but the Final Four battle for the championship was a complete smackdown. Karen O’Connor was all, “come at me, bro!” and George Morris called her, “a pathetic noodle” and it was pretty much all downhill from there. The father of the forward seat sits atop a field of foes brought down by his quick wit, short temper, and the ability to make even the bravest equitation master cry into their horse’s mane in shame, but then go into the ring and win a gold medal.

Only one remains who can put up a fight against GHM: Secretariat. The fastest horse who ever lived, the king of every racing fan’s heart, who swept his way into the finals by charging so quickly into the lead that even The Queen herself, Zenyatta, could not come anywhere close to catching beloved Big Red in the final stretch. And now the gallant King seeks to cement his place in history by winning this very serious, very important Horse Nation March Madness Tournament!

The choice is yours, dear readers. Choose Wisely.