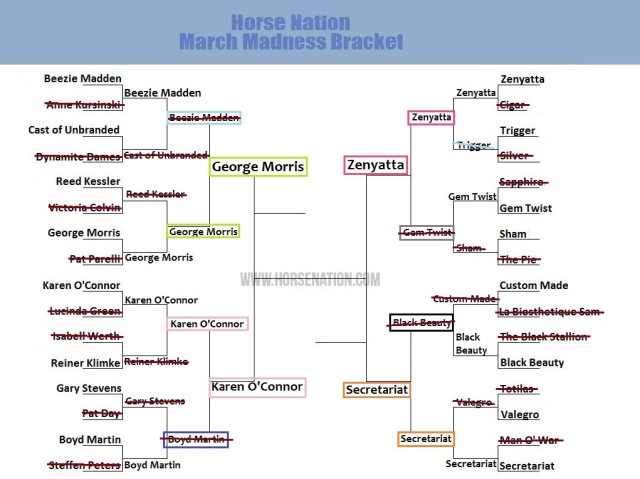 It may be April, but two horses and two humans are still in the running for the March Madness Big Dance!

The elite eight was an impressively intense, nail-biter series of match-ups that has produced a truly intimidating final four. In the closest race of the night, Beezie Madden was defeated by George Morris by a margin of just seven votes. A heart breaker for our Show Jumping Queen, but not altogether shocking when facing a man who has been known to put thumb tacks on saddle seats to make a point. George will face Karen O’Connor in the final four, who barely fought off her former WEG teammate Boyd Martin 56% to 44%.

On the Horse side of the board, racing dame Zenyatta put in a powerful performance in a tight race with Hall of Fame show jumper Gem Twist to win 54% to 46%, but the blowout of the night was Secretariat over poor, beaten, bedraggled Black Beauty, who may now finally go out to pasture with dear Joe. Big Red put in another Belmont-esque performance, winning with 73% of the vote.

We’re down to two more rounds, which we’ll be running in fast order this week: The Final Four and the Champion face-off of Best Horse vs. Best Horseman. Get to Voting!