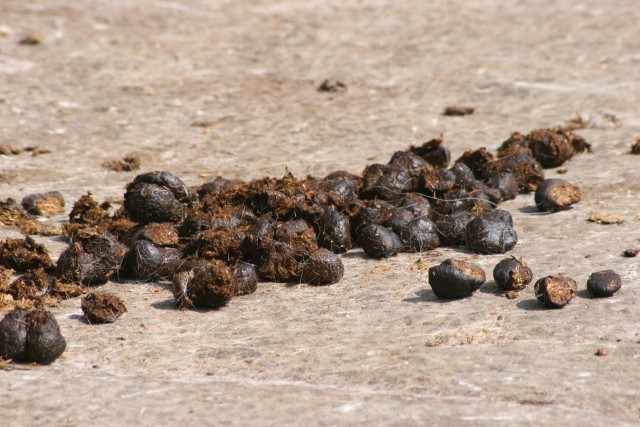 Hey, everybody poops. What does your horse’s poop say about his personality? Maria Wachter imagines what your equine’s manure patterns might represent.

Disclaimer: this guide is meant to be a strictly humorous piece of entertainment, and your horse’s fecal activity may reflect a totally different personality. While we’re just having a little fun in this article, however, your horse’s manure can be an important indicator of his overall health: we recommend this article from thehorse.com to learn more about equine health and manure.

Your horse produces normal, average-sized, medium soft but slightly firm greenish-brown colored “apples”: totally normal, very predictable and extremely boring. Horses that poop like this tend to be just like their turds: predictable and normal. They are regularly called words like: “broke,” “kid-safe,” and “bombproof.”

They tend not to have any crazy vices, soundness issues, or other abnormalities. They are normally basic colors like sorrel and bay. If they were a human, they would have a desk job, enjoy their Starbucks coffee and have a golden retriever named Sparky.

Your horse is the Picasso of pooping. Normally your horse has “normal poop”, but when his nerves get the best of him, he tends to “spray.” His turds have the ability to splatter everything in a 20-foot radius. Sometimes his defecation resembles something of a late 20th-century painter. He is very talented in getting everything that was once clean very, very dirty, such as brand new trailers and the show ring.

Your horse is a very creative individual. He probably also can unlock stall doors, get into the grain bin and learn many tricks. He might be a little unpredictable and spooky under saddle and might enjoy a really good buck now and then. He has at least once vice but is highly intelligent. If he was a human, he would probably be a brain surgeon or a CEO, but a habitual nail-biter

Horses that produce these big masterpiece normally are drafts, draft-crosses or almost foundered ponies. The elephant-sized poopers have a great appetite, are very calm and rarely ever spook. Nothing startles them: after all, they need to stay still for a very long time to get this bad boy out. These guys tend to be easy keepers and not at all picky about their hay selection. They normally don’t require grain, but will try to convince you otherwise.

The elephant pooper might not be the sharpest knife in the drawer, but his quiet demeanor makes up for his lack of brains. If he were a human, he probably would work in the food service industry so he could score a bonus meal and not be required to do anything involving a lot of creative thinking.

These horses like to make music while they “go.” Each poop is to a different tune. These horses have a great sense of humor, normally work for a living and are a pleasure to be around. They excel in jobs that require a public appearance so they can wow the crowds with their music: police horses, carriage horses, dude-string horses, etc. They’re tough as nails, on average live a very long time and rarely ever get sick.

They would be the human equivalent to teachers, construction workers, policemen, and rockstars.

These horses have messy stall habits. They might have normal manure, but they poop all over their stall or corral and like to walk through it on a regular basis. Cleaning their corral takes three times as long as most horses’ spaces. They might have a couple of stall vices, but otherwise pretty good under saddle. They tend to be the jack of all trades, but master of nothing. Most of these horses have had at least a couple of owners. 99% of the time they’re pretty mentally stable, but the other one percent reminds you of why they were for sale on Craigslist in the first place.

If they were human, they would have been divorced at least twice, have a job that they hate and drive a hybrid car — not because they care about the environment, but because they want to spend their fuel money on wine.

Do you have an expressive pooper in your barn? Give him the poop personality treatment in the comments section! Go riding!