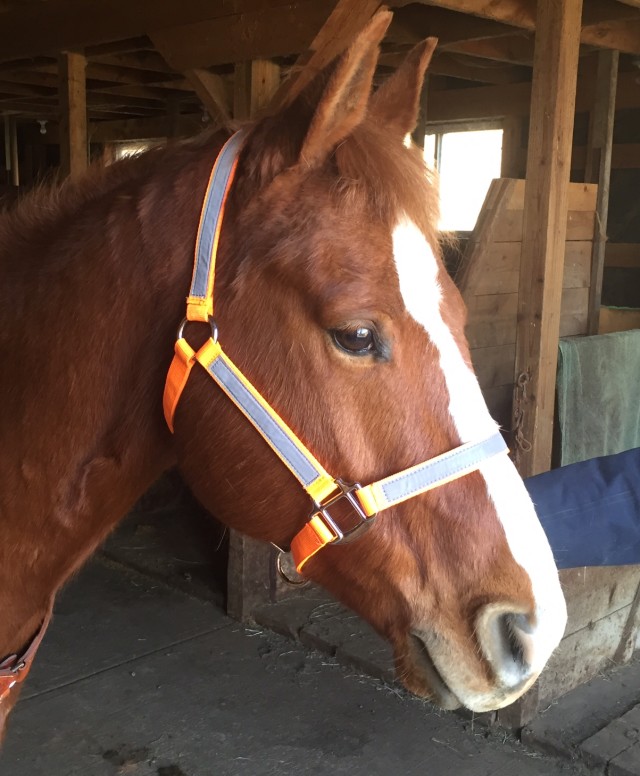 For horses and riders who like to be seen (aka all of us).

Let’s face it: no matter how “horsey” of a neighborhood you live in right now, open spaces for riding are rapidly disappearing. Increasingly, we are sharing our recreational spaces with hikers, mountain bikers or even motorized vehicles; many of us ride on or near roadways as part of our own personal trail systems or to access other riding spaces. As motorists seem to be moving faster and faster in an increasingly busy world, it’s critical that we as horseback riders do everything we can to ensure our safety, our horses’ safety and the safety of drivers and others who share our spaces.

This past winter I reviewed the Horze Reflective Wrap Riding Sheet, a product that I firmly believe truly works to increase the visibility of horse and rider, whether you’re hacking along the road’s edge or riding on public property that might be used by hunters. The one downside to the riding sheet, of course, is that it’s a little heavy for warm-weather use: it’s lightly lined, meaning that as the days grow longer and the air gets warmer it’s too much of a later for my horses to wear.

Fortunately, Horze has the perfect solution: the reflective halter and tail guard!

The halter comes in a full range of sizes from Shetland pony to extra-large warmblood, all in bright orange with reflective tape at the noseband, cheek pieces and crown. It’s fully adjustable at the crown as well as in the noseband for a custom fit, which I particularly appreciated for slipping on under my bridle. The orange is a high-visibility hue that pops during the day with the reflective sections taking over as the sun starts to set.

The tail guard is made of a durable neoprene and attaches with heavy-duty Velcro. It’s the same bright orange as the halter, with a nice wide reflective tape right down the middle for maximum visibility. (It also sets off Red’s cow horse booty quite nicely, in my opinion.)

The other end of Red. Photo by Erik Bentley.

Heading down the road

On the day I was able to snag my most patient horse-husband to take plenty of photos, I started my ride in the bright light of late afternoon, so in photos the orange doesn’t necessarily “pop” like it did in person. However …

… I shamelessly flagged down these drivers to ask them if the tail guard was visible from down the road, to which they responded “oh, yes!” We then moved into the shade to get a better idea of how the orange might look as the sun went down.

In the fading light, the orange took an almost glowing effect, and the reflective strips caught the eye as well.

Overall, I think these two pieces of equipment are worthwhile investments for anyone who rides on or near public roadways or shared trails, and will be invaluable during hunting seasons as well. Both the halter and tail guard can be used independently of other tack, so they could also be a logical addition to your horse’s turnout gear if his pasture or paddock is close to public or private hunting spaces. As a bonus, the bright orange and reflective qualities make both of these pieces easy to locate should they be parted from your horse out in the field!

The reflective halter runs at $22.95 and the tail guard runs at $13.95, which makes both of these pieces a budget-friendly addition to help boost your safety in the saddle. Check out the full line of reflective gear on Horze.com!