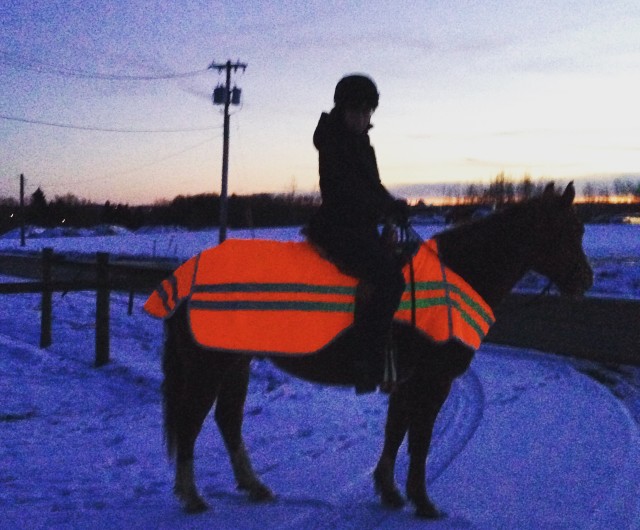 We don’t like to throw around the phrase “must-have” very often, but if you ride on or near public roadways, you definitely need to add this to your tack room.

I ride in what I’ll call “farm-friendly” country: there are plenty of everyday non-equestrian civilians driving around, but there are enough farms and farmettes in the county that folks are used to seeing livestock, slow-moving tractors and the ubiquitous Amish buggies traveling up and down the road. When I’m riding along the shoulder of the road, as I do on occasion to access a few fields where I like to ride, most motorists typically treat me the same way they treat any other agricultural obstacle: they zip around me and continue on their way.

Now, as any of us who have spent any time around horses can attest, even the most bombproof solid citizen can and will spook at the most inopportune time, and when a car happens to be speeding by you at 40 miles an hour that’s a truly terrifying prospect. If this weren’t bad enough, some of the drivers simply don’t seem to see me until the last possible moment, cutting the wheel over or giving me just a foot or two of breathing room.

So when the Reflective Wrap Riding Sheet by Horze arrived on my doorstep, I was thrilled to give it a test-ride.

The sheet, as shown in the above photo, seems to be designed primarily for fitting around English saddles, but I was able to experiment with a few different placements on my western tack and am confident that the sheet is versatile enough for all disciplines:

My original set-up, which looks the closest to the advertised photo but would probably not work out on a bigger saddle. Photo by Kristen Kovatch Bentley.

My later-adopted setup, which doesn’t look quite as “sleek” as the above photo but is much easier to apply and remove, and fits over a variety of saddles in addition my small barrel-style saddle. Photo by Kristen Kovatch Bentley.

The design of the sheet makes it very easy to put on and take off: there’s a large cutout for the saddle itself with velcro straps that attach over the withers and across the chest — there’s no need to pull the sheet over the horse’s head, which I appreciate. The reflective straps run across the front, down both sides and across the tail flap as well for maximum visibility.

Back view. Photo by Kaitlyn Bentley.

The sheet is 420 denier polyester and is both waterproof and breathable. It’s lightly lined, so I wouldn’t recommend it for intense summertime riding, but for our brisk winters it does a great job keeping the horse dry in light rain and snow so he can go back into his sheet or blanket without worrying about blanketing him wet.

But what about that visibility?

In case the bright orange isn’t grabbing your eye yet, we did a few visual experiments to test just how visible this sheet could make me and Red. Here’s a basic photo we snapped just as the sun was starting to go down:

And once the sun had set all the way, we turned on the headlights to see what things would look like both directly in the light and just coming into the range of the beams. The photo quality is pretty poor in this lighting, but you can get an idea of how the sheet performed.

Directly in the headlights. Photo by Kaitlyn Bentley.

Out of the direct light, reflecting. Photo by Kaitlyn Bentley.

As the sun dropped down below the horizon, we took one more photo, convinced that this sheet practically glows in the dark.

In addition to all of the photos, I rode up and down the road a few times to gauge whether drivers’ reactions would be any different. I don’t claim that this sheet will automatically protect you against inattentive drivers, but I did notice more drivers than normal slowing down, passing wider, and moving over sooner than when I was riding without the sheet. For the first time in my riding life, a few drivers actually passed almost obnoxiously slow — a problem that I welcome with open arms. Whether it’s the high visibility that reminds drivers to do what they already know or some belief that the “safety orange” color signals some kind of danger to motorists, the sheet seems to work.

Some family members happened to drive by on a few of my rides using the Reflective Wrap Riding Sheet, and I compiled their comments below.

“I could see you all the way from the overpass!” [a distance of one-quarter to one-half miles.] This quote was spoken a few days prior to some very needed cataract surgery, to give you an idea of what kind of visibility we’re talking about.

“As soon as I came around the corner, you looked like a torch.”

So who could use the Horze Reflective Wrap Riding Sheet? Anyone who hacks on or near roads, riders who share open space during hunting season, road drivers (I didn’t try this on a harness horse but with some creative application I’m sure it would work)… essentially, if you are riding in a location in which you need to be seen, this sheet is a wonderful investment.

As the modern world and motorists encroach further on riding spaces, the need to stay highly-visible will remain paramount, and the Horze Reflective Wrap Riding Sheet is a great tool to add to your tackroom. Check it out on the Horze website and orders yours today!