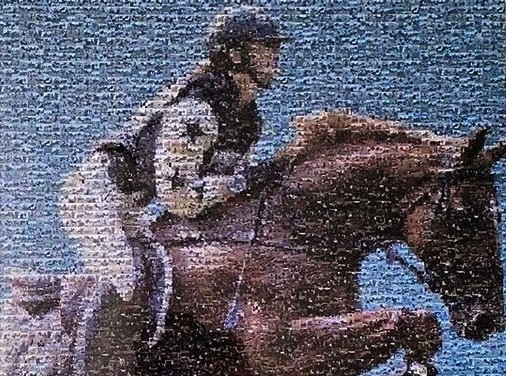 At the memorial service for seventeen-year-old Olivia Inglis, who suffered a fatal accident on cross-country in Australia, her family was presented with the photo mosaic of riders all over the world showing their support.

The collective hearts of the horse world broke last week when we heard the news that seventeen-year-old Olivia Inglis had died on the cross-country course at Scone Horse Trials in New South Wales, Australia as a result of a rotational fall. The accident also claimed the life of her horse Coriolanus, who was euthanized when his injuries were discovered to be more severe than originally believed. The darkest times, however, show us what we’re truly capable of, and the global equestrian community rallied behind Olivia’s memory, taking to social media to share messages of support for the Inglis family and to remember a young equestrian who was taken from us too soon. While the accident was a dark reminder that this sport that we love carries intense risks, the #RideForOlivia movement also reminded us that horses carry us to the greatest heights, regardless of discipline. The images tagged #RideForOlivia were incorporated into a photo mosaic, which was presented to the Inglis family at Olivia’s memorial service earlier today. (It’s unclear how many images were ultimately selected from the hundreds of thousands tagged on social media.) The finished piece is both a lovely tribute to Olivia Inglis and a powerful reminder that the equestrian community cares deeply for its own.

As we mourn the loss of Olivia Inglis, let us also celebrate her life, her passion for horses and the global equestrian community as a whole.