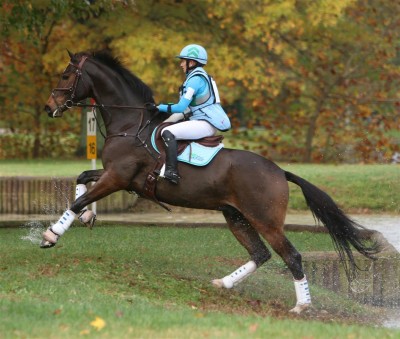 Catch up with Kentucky Performance Products’ venture into event horse ownership! The Elevate Event Team’s “The Natural E,” also known as Leo, is gearing up for 2016.

The days sure fly by when you are having the time of your life! It seemed like just yesterday that Megan and I were walking the novice course at Hagyard Midsouth Three-Day Event and Team Horse Trials. Once again, the Natural E (Leo) put in the best dressage test of the entire competition, earning a 21.8. His inexperience showed on the cross-country course when he stopped at the scary looking “spider fence,” but after some reassurance from Megan that the spider was not going to leap off the fence and bite him, he jumped it with oceans of room to spare. You could see him thinking, “I will jump it if you say so, Mom, but I am going to be sure I jump high enough so that spider can’t get us!” The team galloped confidently off and went clean over the rest of the course. Leo had no problem navigating the stadium course and finished the day in 13th. He got lots of pats and peppermints as we all celebrated the end of our first season.

Since we knew Leo was headed to Ocala in January, he only got a few weeks off in November and then it was back to work. The wet weather meant lots of time in the indoor working on dressage and jumping grids. Just before Christmas, Jessica Ransehousen visited Reese Koffler-Stanfield’s Maplecrest Farm. Leo and Megan hauled over for several lessons. We all laughed at what Jessica dubbed Leo’s “Hawaiian hula dance” as Megan worked on keeping him straight down the quarter and center lines. He is so sensitive to her leg that the slightest touch would cause him to shift his haunches one way or the other. Use your seat to hold him straight, look up and keep your legs very steady—those were the goals of the session. Over the next two days Megan got the “hula” under control!

Christmas followed quickly. Santa was good to Megan and Leo, leaving them perhaps the biggest stocking I have ever seen, full of treats and toys. On the wet winter days that led up to their departure for sunny Ocala, Leo would help Megan set courses for her students and keep her company in the arena while she taught. No lead shank necessary, he was content to follow Megan wherever she went, checking out her pockets for treats, playing with her coat, her hair, or whatever he could get his lips on. They certainly have a special bond.

Leo and Megan departed for Blue Hill South in Ocala on January 18th. The caravan of horse trailers loaded with horses, equipment, feed, supplements and hay rolled out before light. Thank goodness they left town just before the big snow storm hit. I headed down two weeks later to groom for Megan at their first show of the season, Rocking Horse Winter 1 Horse Trials. Leo took to Florida like a duck to water. He loved his new pasture mate, Biggin (Rock Hard Attitude), and was relaxed and happy in the airy open barn at Blue Hill. He settled into his new routine right away.

When Megan is in Florida taking care of and riding 4 to 7 horses per day, plus helping out as needed around Blue Hill South, it’s a full-time job. She starts at 7 a.m. and finishes up 12 hours later, but she thrives on it. You can tell by the big smile she wears on her face. I arrived on the Friday before the show. It was great to see how happy my boy was!

Megan warmed Leo up and ran through her dressage test. She gave him a bath and we packed up the trailer in anticipation of an early departure the next morning. The weather was perfect, a little chilly for Florida, but excellent for eventing! The show grounds were packed: there were horses competing in all three phases, and the loud speaker announced each rider as they left the start box on cross country. The show ran like a well-oiled machine.

Leo is one of the most “aware” horses I have ever dealt with. He is super alert and does not miss a thing. At 17.3, he is already a big boy, but when there is something new to see, he puts his head up as high as he can and stands on his tippy toes to check it out. I am a whopping 5’1”, so when he is on his toes with that head up, he towers at least 3 feet above me! As we brushed him off and tacked him up he was in full giraffe mode. I certainly can’t leave home without my step stool!

On the way to dressage we saw lots of familiar faces and heard cries of “have a good ride” coming from all directions. You just can’t beat how the eventers support each other. It is like one big family. I love it.

Leo was relaxed as he warmed up for dressage and the team put in a lovely test earning a scored a 25.4. Jessica would have been proud, there was no sign of the hula dancing down the center line! They went double clear in stadium later that afternoon and finished in the lead. The next day Leo warmed up well before cross-country. Because of the weather he hadn’t schooled cross-country since Team Challenge. Megan’s goal was to have a forward, rhythmic, confidence-building run. Leo galloped out of the start box and over the first few fences like a pro.

One thing we learned early on about Leo is that his go-to reaction is “when in doubt, jump bigger!”  He thought the shark’s tooth, a new fence for him, was a little scary, so Megan gave him a strong ride and true to form he sailed over it with plenty of room to spare. Leo loves the water and galloped in with no hesitation. I think he likes getting as wet as possible as he canters through. The only other fence that worried us was the natural log into the dark woods, but a strong ride from Megan convinced Leo there were no bogeymen in the darkness and the pair galloped on over the ditch and finished with a double clear. Our goal for the first show of the season was met and the icing on the cake was a blue ribbon at the end of the day. Now it is time to move up to Training!