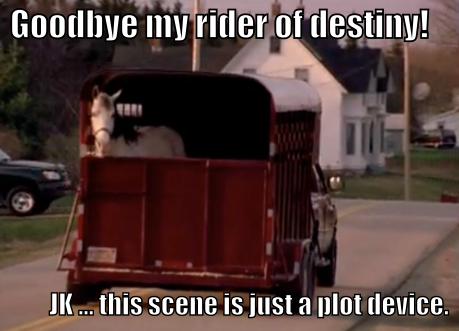 These movies are epically bad, but just so good for giggles.

IMDB: “A teenage girl, trying to come to grips with the death of her mother in a horse-riding accident, nurtures the foal of her mother’s horse.”

Because of course she does and, of course, her loving/bewildered/patriarchal father forbids it. My one take from this movie is, “Why is the horse always in the trailer backwards? Safety first, movie makers.”

IMDB: “An alcoholic former horse-trainer perceives in a fifteen-year-old boy a unique gift of horsemanship and makes it possible for the boy to conceive his dream and pursue it.”

Troy Bolton rides a horse. #cannoteven My final thoughts, “I’ve watched a lot worse, but is Zac Efron really that young? He looked like a baby in 2005! I might need to get some of my now seemingly inappropriate emotions in check when watching The Lucky One, TBH.”

IMDB: “A woman moves with her husband and seven-year-old daughter from Colorado to California and then her husband abandons them. While trying to rebuild her life, she finds solace while working at a horse farm and decides to enter her beloved horse in a high-stakes riding competition.”

This movie, you guys. It is the epitome of Murphy’s Law. If something can go wrong, it does. I guess it’s so bad that even Youtube and IMDB don’t have a trailer available, so I’ll just let Oprah sum up.

IMDB: “When a troubled teen is forced to leave a self-destructive lifestyle, she discovers an abandoned horse along her journey to redemption. Will temptation from the dark shadows of her past lead her astray or will her newfound love of God and a rescue horse help her find salvation?”

This was possibly the most boring movie I’ve ever watched. Like, I’m pretty sure Ben Carson watches this film before every GOP debate and televised interview. It’s a cinematic Xanax. On top of that, the love interest, Travis, looks eerily like Alan Strang from Equus — a movie that still haunts my dreams.

IMDB: “Teenager Natalie Canton’s world is turned upside down when her mother loses her battle with cancer on Valentine’s Day. A white rose becomes Natalie’s only link between the mother she lost and the hope she desperately needs to find.”

Natalie’s Rose is, well, an utter flop. The acting is cringe worthy — and judging by a few of the other movies I’ve reviewed I have pretty low standards. Even the voiceover during the trailer… It’s all gone so horribly wrong.

Have a good laugh and then give me a shout in the comments!