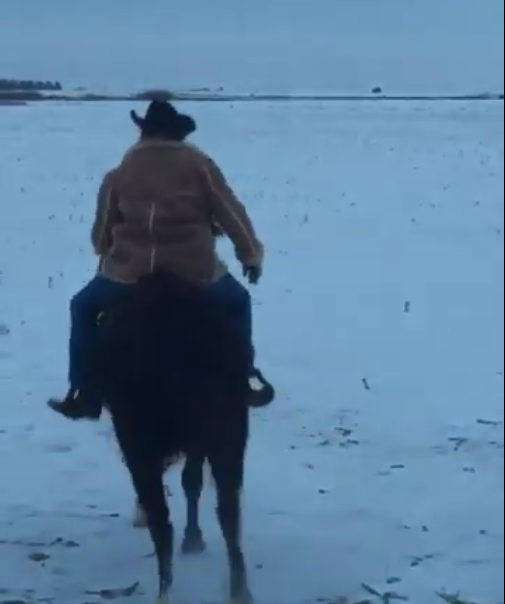 First of all, we’d like to officially take back anything not-so-nice we may have said in the past about football players, horseback riding and insinuations that one of those things was more of a sport than the other. Because the number of football players coming out of the equestrian closet these days is impressive, to say the least.

Meet Jared Allen, who chose to announce his retirement from the life of a professional football player in what might be the most epic, dramatic, beautiful fashion of all time:

Riding off into the sunset pic.twitter.com/wZXovseGKS

In his 12-year football career, Allen played first for the Kansas City Chiefs, then was traded to the Minnesota Vikings where he made history by signing the then-highest contract for a defensive player in the NFL. Six years after that, Allen moved to the Chicago Bears, and then was traded to the Carolina Panthers in 2015. Fortunately, this last trade gave Allen the opportunity to play in his first (and last) Super Bowl.

So where did this guy learn to ride a horse — and ride one well? Allen, born in Dallas, Texas, grew up on a horse ranch in Morgan Hill, California, and clearly still keeps horses in his life. He’s now a resident of Minnesota, where, judging from the snow in the above video, he also keeps some horses.

Incidentally, Allen’s teammate, Josh Norman, also has an equestrian bent (he grew up riding Saddlebreds). This begs the question: do the Panthers talk horses in the locker room? Do you think they ever went trail riding together? After all, football may be a brotherhood all its own, but equestrians are family too.

Allen also gave a more formal retirement statement in addition to his above video message:

I want to take this time to thank my family, friends, fans, and teammates who have given their continued support throughout my twelve year career. It’s been a great ride for me, and I couldn’t be more grateful for the memories. It is with a great deal of thought and consideration that I have decided that I will not return to football next year. I want to thank the Carolina Panthers, Chicago Bears, Minnesota Vikings and the Kansas City Chiefs organizations, who provided me with an opportunity to live out my dream and to be a part of their wonderful communities. Thanks for the life long memories.

Jared Allen, we salute you. May your trails be smooth in your happy retirement.