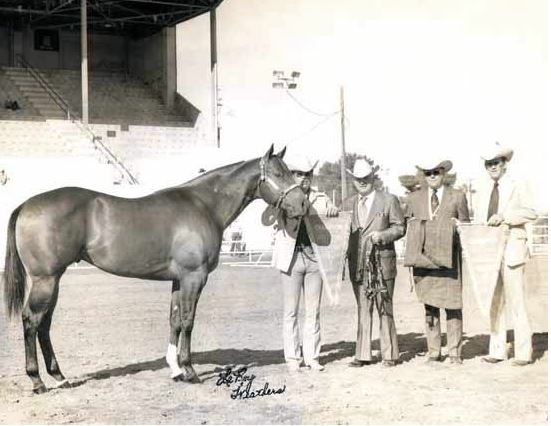 If your childhood bedroom had more posters of stallions than boy bands, you know what we’re talking about.

I’m not saying I didn’t have a crush on Jonathan Taylor Thomas in the 90s, guys. I did. I’m just saying that given the chance to meet my favorite human crush or my favorite horse crush, there wouldn’t have been much of a contest. Apparently many of us here at HN share in this sentiment, because we’ve all got a stud that stole our hearts at some point past or present, and we’re here to proclaim our love.

My very first horse was a quarter horse, a Poco Bueno descendant who packed me around western and english 4-H for as long as her little calf-cutting body would allow her, and despite going on to love many the Thoroughbred, Warmblood, and other such hot horse types in my life, I have always harbored a ferocious love for this remarkable, old-school Quarter Horse stud. It’s a cliche you hear all the time, but the truth is that they really, really don’t make them like this anymore. AQHA Hall of Fame member, Poco Bueno was a champion halter horse, sired some magnificent babies, and could cut a cow faster than a knife could cut soft butter. Given the chance, I’d take another Poco Bueno descendant in a heartbeat.

Somewhere around my junior year of college, this tiny sorrel stallion appeared in a stall one day on permanent loan to the university program. He was pretty up-there in age, with creaky joints and questionable-looking knees, but once he worked back into shape he could still stop, turn and slide like the other reiners who were a third of his age. As our coach at the time wasn’t much of a details man, we never learned his registered name, any information about his past career, offspring or history, or even if he had a better nickname than “The Stud” but we loved him like a mascot all the same.

Growing up I had a subscription to pretty much every single horse magazine in existence: the Chronicle of the Horse, Practical Horseman, Dressage Today, Equus and countless others — I was an eventer but I distinctly remember having a subscription to Western Horseman at some point. I escaped into them on a daily basis like most young girls escape into Seventeen, except that instead of crushing on New Kids on the Block (ewwww!) like every other female my age I was crushing on horses. Ads for the KWPN stallion Roemer (1975-1996) were to me what photos of Jonathan Taylor Thomas were to Lorraine (sorry, Lorraine, I’m morally obligated to never let you live that one down).

17 hands, deep auburn coat, presence for miles, spring-loaded movement… yum. In addition to competing through the Grand Prix level in both show jumping AND dressage (it’s like a man who’s both sensitive AND manly), once imported to the U.S. from the Netherlands he became the poster child for Iron Spring Farm’s breeding program and sired a number of internationally successful sport horses. He earned more accolades that we have space to mention and — this is when you know a horse has REALLY hit the big-time — they made a Breyer horse model of him.

I’m a huge fan of Tenor Manciais (1985 Selle Francais stallion). He was successful in the young jumpers in Europe and then competed at the international level. He is unique in coloring and typically throws roan babies, which I think is too cool! My gelding, Waffle, is out of Tenor Manciais and is a spitting image of his dad.

I’ll give a shout out to my main man’s grand-pappy, Te N Te (Quarter Horse). In Te’s show career, he earned 22 Open Halter points, and was Circuit Champion at the Arizona Sun Country Circuit. Because of a hock problem, he was shown very little, but he excelled as a sire, with sons and daughters on the race track and in the show ring. Out of 5 foal crops, he get earned a total of 3,593 Open Halter points, and also won performance points in the National Cutting Horse Association, Palomino Horse Breeders, and the Buckskin and Appaloosa associations.

Photo used with permission from JerryWellsQuarterHorses.com

As far as stallions go, my first thought was Rohdiamant, an Oldenburg. He’s certainly not my favorite based on being spectacular — that would go to Sandro Hit or Ed Gal’s newest star,  Zonik (seriously, watch this video and this man’s hands!?)–  but I adore him as he’s such a fantastic producer of upper level dressage horses with super trainability.

With all the QH love though I also must give a shout out to Hollywood Jac 86 . I may be a bit biased as he’s my rotten Quarter Horse’s grandsire, but I’ve adored riding every one of his get (that didn’t come out of the Hollywood Dun it line).

Did you have a stud that stole your heart, HN? Give them a Valentine shout-out, and go riding!