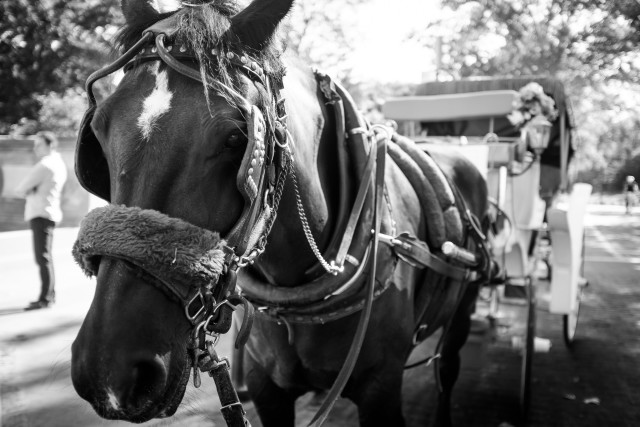 New York City Mayor Bill de Blasio’s latest pledge looks at first like a win-win for the city and carriage drivers alike. However, a closer look reveals that nothing can be that simple, especially not the fate of over 200 carriage horses.

The ongoing saga of Bill de Blasio’s fight against the New York City carriage industry has been a topic of interest to us at Horse Nation for years: from the oft-mocked “electric car” proposition to the 2015 apparent mayoral back-down on the issue, we’ve brought you the details of de Blasio’s promise to supporters that he would end the city’s carriage trade once and for all. Now that a new deal pledged by de Blasio has made news, it sounds like perhaps the struggle between the mayor, animal rights activists, rumored real estate interests, the carriage drivers, fans of the carriage industry and the over two hundred horses involved might finally reach a peaceful accord. Unfortunately, the mayor’s plan appears to soothe any of these parties, and may even create more problems than it solves.

de Blasio announced his plan on Monday morning: public funds would build a new barn to house carriage horses within Central Park, allowing the old barns in Manhattan’s midtown to be sold or torn down. The carriage industry would be confined to Central Park alone, but pedicabs (the bicycle-powered rickshaws also used to give tourists rides) would be banned from the park below 85th Street to avoid direct competition. The carriage industry’s 200 horse-herd would be reduced to 95, with only 75 animals working at any given time.

So what about the horses?

This plan, while seeming to please almost everyone — keeping the horses off of New York’s dangerous streets while still allowing them to work and providing them a home — decimates over half of the current industry, meaning that over 100 teamsters will be out of a job and over 100 horses suddenly looking for new homes. While it’s lovely to think that the horses from the reduced herd will find safe, loving homes in retirement havens, the reality is that rescues and sanctuaries are stretched thin, and some of these horses will likely end up in bad straits.

In defense of this plan, it is a monumental step compared to where it appeared the industry was heading when de Blasio originally took office with the rallying cry that the carriages would be wiped from the city forever. Steve Malone of the city carriage industry spoke on Horses in the Morning on Monday, January 18 (you can listen to the full episode here; Malone’s interview starts around 1:21) and thanked supporters of the carriage horses, whom he credits with keeping this issue alive and in the public eye. However, Malone stated that the fight was far from over — the goal is to prevent any of the horses from retiring and any of the teamsters from losing their jobs.

It’s interesting to note that the entire issue which began on the premise that carriage driving in New York City was inherently inhumane and needed to be eliminated is changing its tack with no apparent references to animal abuse. NYCLASS, the most vocal opponent to the industry, sees de Blasio’s plan as a good compromise. (Other groups in support of a total ban are still adamant that the entire industry is abusive, though de Blasio seems to have dropped this tactic.)

Opposition from all sides

The announcement that a multi-million dollar stable for the carriage industry would be built in Central Park sent groups like the Central Park Conservancy and New Yorkers for Parks reeling. Taking public space in the city’s highly-protected iconic park and setting it aside for private commercial use is tantamount to the purpose of the park in the first place, and worryingly opens the door for further privatization of the public space in the future.

Continuing to operate the carriage rides within Central Park is generally accepted (though some opponents still believe that having carriage horses sharing space with pedestrian traffic presents avoidable dangers) but turning public land into private space has been met with strong opposition.

And then there are the poor pedicab operators, who would be banned from working in areas of Central Park where they make their living. de Blasio’s plan came under criticism that he hadn’t really considered the implications for pedicab drivers, but simply sought to appease teamsters.

As Steve Malone stated on Horses in the Morning, the teamsters were continuing to work with de Blasio to try to make this plan into a true win-win situation for both the city and the carriage industry. However, with opposition from Central Park interests as well as the pedicab industry, it remains to be seen if any kind of fitting compromise will be reached at all. The fate of an entire industry, not to mention a few hundred working horses, rests on the outcome.