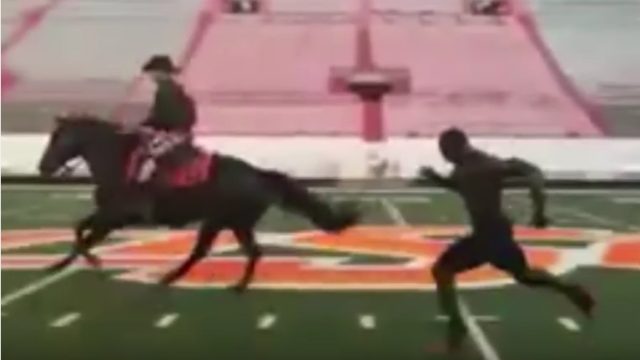 In a flat-out race between a horse and a pro football player, who’s faster? (Probably exactly the one you’d expect to be faster.)

Football is often the sport first maligned by we equestrians when people suggest that our activity of choice may not actually be considered a “sport.” (For the record, we firmly believe that it is.) However, we do have to hand it to football players: they take a pounding on the field but are also fast on their feet with incredible reflexes.

But just how fast are those feet? A video recently surfaced of the Dallas Cowboys’ Dez Bryant in his college football days at Oklahoma State, racing the team’s mascot “Bullet” in a field-length sprint. The results are pretty much what you’d expect, especially considering that the Quarter horse’s claim to fame is its incredibly sprinting ability:

But hey — Bryant gave it a good go! (Chad Ochocinco Johnson, we’re not giving you as much credit since you had a giant head start.)

In an endurance race, man vs. horse has been known to have a slightly different outcome: check out our coverage of the Man vs. Horse Marathon for more!