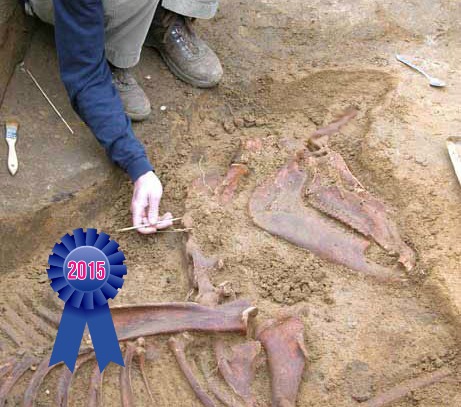 The myth is real.

Editor’s note: Actually…  the myth isn’t QUITE real. This post ran on April 1, 2015 — April Fool’s, of course! The pranksters among HN’s readership started passing it around on social media, seeing which among their more gullible Facebook friends might take the bait. As a result story racked up some 17,000 views over the course of the day, making it the 22nd most read HN story of 2015. Enjoy!

The remains, which were discovered just last month at an archeological site outside of Pyramid Lake in western Nevada, appear to be those of a smaller member of the Equidae family exhibiting a formerly unheard of two toes and bony protrusion on the central cranial plate. Scientists are speculating that this may in fact be the actual remains of the animal responsible for the myth of the Unicorn.

In news that has simultaneously shocked the scientific community and vindicated the dreams of every 12-year-old girl, Dr. Roscoe T. Gort of the Nevada Archaeological Society has announced that he and his team have unearthed what very well may be proof that unicorns once roamed the Earth.

While working at a dig site near Pyramid Lake, one of Dr. Gort’s associates found what he initially believed to be the remains of a juvenile mustang. Given the depth of the dig, that simplistic assessment seemed unlikely so the team pressed on.

“Normally we would have written off such a seemingly insignificant finding but given that we were working in an area with remains from the very early Holocene period we dug further,” Dr. Gort noted.

Note the progression of the lower limbs. Photo from Wikipedia.

The team initially noticed the two toes while uncovering the lower portion of the remains. Because the evolution of today’s modern horse came from ancestors with three toes that seemingly evolved directly into one toe this was particularly noteworthy and exciting.

With renewed interest the team continued to uncover the fossilized remains. Due to the awkward way the remains were preserved the complete uncovering took nearly a week. It was on the seventh day that the team uncovered the skull of the creature they’re now calling Equus Ceratinus (Latin for ‘horned’). The skull exhibited a spiraled horn of approximately 33cm in length and located on the front mid portion of the skull. Gort was understandably amazed.

“We just couldn’t believe it when we found it. There was certainly some talk of it being a hoax and possible planted there but upon further study both in the field and back in the lab it has been verified that whatever this creature was, it did indeed exist and it did have a single spiral horn.”

Given the surrounding flora and fauna found in the layers around the remains, Gort and his team believe the unicorns lived during the same time period as the very earliest homo sapiens. This seems to be further verified by previously uncovered artifacts in the area. Both remnants of decorative pottery as well as what appear to be drawings on surrounding rock formations, seem to depict the unicorns in herds. Before the unearthing of this specimen it was thought that the images were symbolic representations of the more common antelope species previously living in western Nevada.

“It’s likely our ancestors heavily hunted Equus Ceratinus, which could explain why no previous specimen has been uncovered,” Gort noted. “For all we know these creatures met the same fate as other popular game animals such as the Quagga and the Tasmanian Tiger.” As depressing as that thought may be, Gort is confident that with the scientific advances made with DNA extraction from fossils we may well be able to recreate Equus Ceratinus.

“What seemed like a ridiculous dream in Jurassic Park is now a very real possibility,” according to Dr. Gort, who also believes that recreating this prehistoric unicorn and attempting to repopulate the surrounding areas with it would be not only a possibility, but a necessity. “Man has dreamed about this very creature — depicting it in images, literature, and now every possible form of media — since recorded history. It seems only fitting he should get to meet one in person.”

When pressed for additional pictures Gort simply stated that they were in the process of putting together an exhibit. “This is still all so new,” he said. “We’re a bit overwhelmed about both the find and the copious amounts of press this has been getting. At present we’re nearly done reassembling the entire specimen and once that’s complete we will open the exhibit and release the full photos to the public.”

Gort and his team also noted that they’re hoping to use this publicity to spread the word about the plight of Nevada’s current wild equines, the mustangs. “We’d ideally like to raise some awareness for these current wild horses and we’re also really interested to see if we can, in fact, further clarify the link between Equus Ceratinus and today’s Equus. How outstanding would it be to think that mustangs and unicorns are distant relatives?” he mused.

Outstanding indeed. Look for an update in the near future complete with photos from Dr. Gort and his team’s findings.

Go Riding! And Believing in Unicorns! (And also… April Fool’s!)